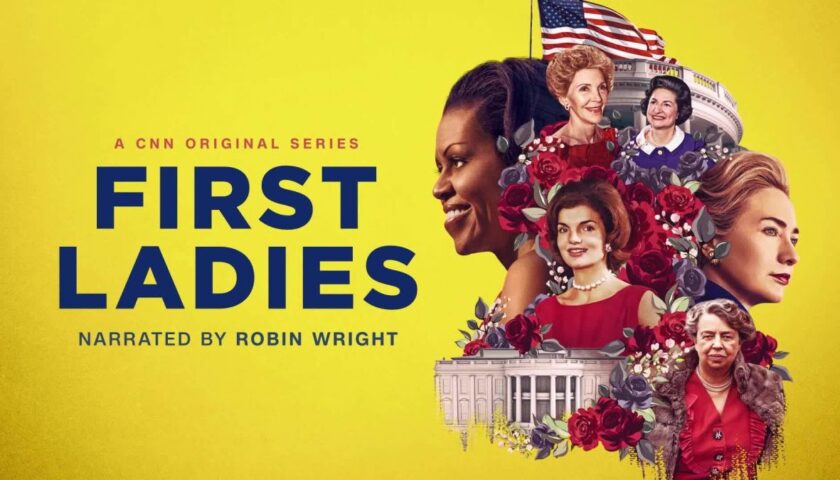 The astonishingly detailed portraits in “First Ladies” (begins Sunday, 10 p.m., CNN) are distinguished in their scholarship, mesmerizing in their drama. The series, which traces the lives and works of six presidents’ wives, begins with Michelle Obama and continues in subsequent weeks with Jackie Kennedy, Nancy Reagan, Eleanor Roosevelt, Lady Bird Johnson and Hillary Clinton.

No portrait is, as one might expect, as shattering to watch as that of Jacqueline Kennedy. Year after year, as Thanksgiving approaches, it seems that we might by now be inured to the pain of those assassination images. And year after year we learn that we are inured to nothing about this event—and one learns it again watching this series. But the segment on Jackie Kennedy is largely a chronicle of her life as first lady, which included an education in her husband’s sexual adventures. A commentator notes that she knew he had been a playboy, “but she hadn’t banked on the sheer scale of his infidelity.”

None of which prevented Mrs. Kennedy from fulfilling the duties of a first lady. She would charm millions of cheering Parisians—an event, like virtually all others in the series, captured in archival footage—and impress President Charles de Gaulle with her knowledge of history and fluent French.

She insisted on staying at the White House during the 13 days of the Cuban Missile Crisis, when it seemed the world might well end in a nuclear war. Days in which she became a sounding board for her husband and that brought the two closer than they had ever been.

There were no nuclear threats in Eleanor Roosevelt’s days at the White House, but she knew what it was to be a sounding board. There has been—except for George Washington and Abraham Lincoln—no presidency as consequential as that of Franklin Delano Roosevelt, nor any first lady as influential as Eleanor Roosevelt. The richest of these portraits, her story begins with a sad childhood and a mother who impressed on her daughter the idea that she was plain, and who gave her the mocking name “Granny.” She came from a wealthy and famous family, but hers was—emotionally speaking—an impoverished childhood.

Her salvation arrived when she was sent to an English girls’ school where she developed a sense of security and independence. Eleanor returned to America a woman transformed. She impressed her distant cousin, Franklin, by her work with the poor, who lived in impossibly crowded tenements on New York’s Lower East Side. As first lady she was a strong advocate for civil rights. When Marian Anderson, the great Black American opera singer, was prevented from performing in a concert hall owned by the Daughters of the American Revolution, Mrs. Roosevelt arranged for an alternative space. One of the most riveting scenes in the series is of Anderson, standing before the thousands who came to the Lincoln Memorial and singing “My country ’tis of thee, sweet land of liberty, of thee I sing.”

One of the highlights of the series is the little-known story of Mrs. Roosevelt’s address to an alarmed nation on the night of the attack on Pearl Harbor. The president was preoccupied with cabinet meetings and the preparation of his speech to Congress the next day, calling for a declaration of war. She spoke of the fears of parents whose sons were now fighting: “You cannot escape a clutch of fear at your heart.” She spoke of her own son, on a destroyer, who might well be on his way to the Pacific. Then she assured listeners that whatever was asked of the nation could be accomplished. “We are the free and unconquerable people of the United States of America.”

Hers was the first government statement on the Pearl Harbor attack that Americans heard. It was only the beginning of Eleanor Roosevelt’s war work.