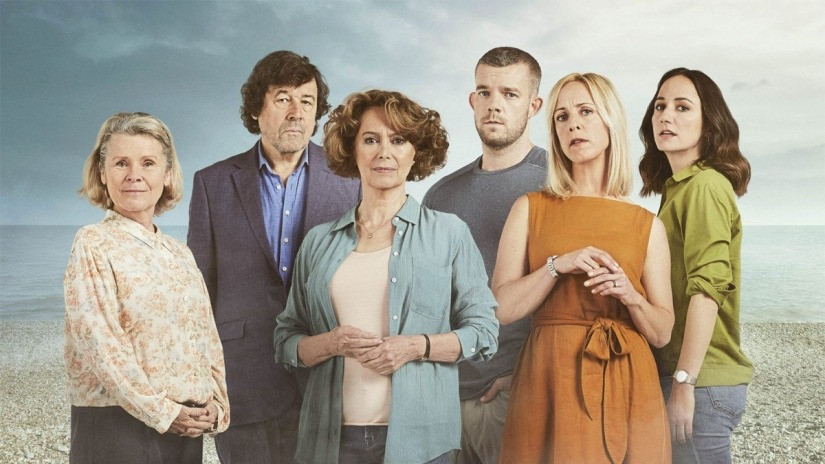 Oscar Wilde said “everything in the world is about sex – except sex. Sex is about power.” The first episode of ITV’s new drama Flesh and Blood disagrees. As far as it’s concerned, sex is all about the money. With their recently widowed mother Vivien (Francesca Annis) dating a retired surgeon called Mark (Stephen Rea), three siblings Helen (Claudie Blakley), Natalie (Lydia Leonard) and Jake (Russell Tovey) become suspicious that he’s after their inheritance. Youngest son Jake is sleeping with one of his personal training clients for money in an attempt to pay back his gambling debts. Natalie is having an affair with a married man who’s the boss of the property company she works at. There might be pastel-painted barn conversions, designer dresses and 4X4s crunching over white gravel driveways, but something is rotten behind the veneer of middle-class prosperity. When a body bag is carried out of a house and into an ambulance, you remember that, unfortunately, sex is often about violence as well.

Surprisingly most of the “flesh” in this series is that of the mother Vivian and her new boyfriend Mark. It’s an exciting choice: so rarely do we get to see older women enjoying sex, let alone a shirt slipping off their shoulders. Writer and creator Sarah Williams has taken the opportunity to explore the difficulties older women encounter when they pursue their passions: her kids grimace at the thought of her new relationship, as though it’s inappropriate. “A woman like that is never single for long,” next-door neighbour Mary (Imelda Staunton) sighs. I’d like to see Vivian rewarded with love, but with flesh comes blood. Her perfect bone structure aside, you get the feeling that later in the show Vivian will be proven naive for having the temerity to think a man might want to be with her.

Though it is nice to see the sexual impulses of women above the age of 30 acknowledged, other female characters in Flesh and Blood have more reductive plotlines. With a successful career in the public sector, Helen is obviously a bad mum and even worse wife. A sharp-tongued, gin-and-tonic slugging harpy, she nags her husband about taking out the washing and loading the dishwasher so much that he has to go and smoke weed out the backdoor to unwind. Obviously, he doesn’t want to have sex with her, either. In bed, he tells her “I’m not a project for you to manage” while reading a book on his Kindle. Meanwhile, unmarried next-door neighbour Mary is bitter and lonely, spying through binoculars at Vivian and Mark’s romance presumably because the absence of a male partner means she has nothing else to do.

As Mary, Staunton deftly conveys the kind of passive-aggressive helpfulness that is only used to make others feel indebted to her. In a particularly creepy scene, Mary unwraps Vivian’s post to reveal a luxurious floral silk dressing gown. After carefully picking open the parcel so she can reseal it without Vivian knowing, Mary puts on the gown. On an armchair eating a TV dinner, she cackles with the unhinged joy of someone who relishes doing things at the expense of other people.

At points, Flesh and Blood’s writing is too on the nose. When Helen asks why her teenage daughter wants her to send over a photo of grandad in hospital, she responds while still tapping away at her iPhone: “I’m doing a post on death, it’s for my followers.” We get it – young people use their phones a lot. In a clumsy rehashing of James Bond sex-scene dialogue, after rolling off the body of Jake, his personal training client moans: “my pleasure, literally.”

But elsewhere, Williams is great at showing the speed with which siblings transition from laughing through games of charades to jabbing at each other’s drinking habits. Your family knows you better than anyone else, that’s why they end up hurting you so much.

Watching Flesh and Blood, we get a sense of where the drama is going. Natalie’s boss will never leave his wife for her. You think the husband Mark did something bad but really it was the neighbour. Helen will realise the importance of family and will stop answering emails at the kitchen table.

It remains to be seen whether the series will upend these expectations, or whether it chooses to repeat them. I fear the latter is inevitable – as expected as the endless cutaway shots of the sea lapping away at the shore.