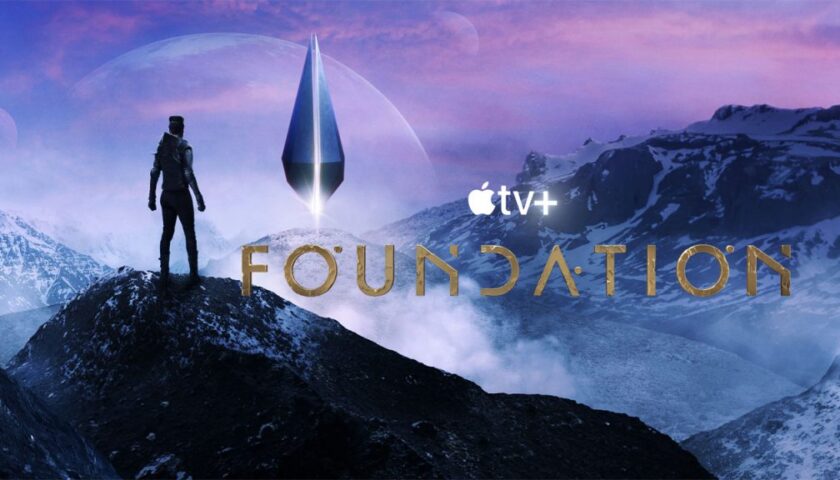 The blending of location cinematography, ambitious sets and computer-augmented imagery in Foundation is pause-your-TV-to-contemplate-the-visuals gorgeous, possibly as well mounted a space opera as I’ve seen on TV. It’s at least as fulfillingly epic and expensive as the genre can get on the small screen, keeping in mind that something like the Battlestar Galactic remake achieved much of its visceral impact from how it worked around its budgetary limitations. Foundation has no evident limitations of any kind, yet no real visceral impact for the most part, because it’s almost stultifyingly dull, especially in its middle episodes.

Perhaps the most amusing aspect of the Foundation tedium is that, given its source material, the show is supposed to be dry and wonky. Asimov based the various Foundation novels and stories conceptually around Edward Gibbon’s History of the Decline and Fall of the Roman Empire. Especially in the early going, those stories are mostly a series of conversations about economics, sociology and predictions about the future through a branch of mathematic called psychohistory, all stretching over decades. Were that the level on which the small-screen Foundation is tedious, fans would probably be giddy, and plenty of neophytes would just seek out a more action-driven science-fiction franchise.

Instead, David Goyer and Josh Friedman’s adaptation ditches its intellectual ambitions for long stretches in favor of pale imitations of those more action-driven franchises, attempts to distract half-committed audiences from chatter about space bureaucracy with all-too-familiar nods to everything from Star Wars to Star Trek to Blade Runner. And there’s no need to tell me that Asimov influenced those franchises. Of course he did. All I’m saying is that I wanted Foundation to be tedious, just tedious in a different way.

I’ve gone this far without a plot summary because any explanation of Foundation will be woefully inadequate, or it will scare you off. We’re tens of thousands of years into a future in which humans have colonized … everywhere. Our point-of-entry character is Gaal Dornick (Lou Llobell), a young woman from a watery planet governed by religious fundamentalists ignoring a pending environmental catastrophe. That definitely doesn’t sound familiar, right? Gaal, one of many key characters to undergo a gender swap from Asimov’s testosterone-saturated world, is a mathematical prodigy who’s wooed to Trantor, the galaxy’s hub city, by the enigmatic Hari Seldon (Jared Harris), father of psychohistory.

Seldon’s work, a predictive model tied to collective rather than individual events, has revealed that the Galactic Empire is about to fall — and by “about to,” I mean in a couple of hundred years. He predicts that the Empire’s fall will lead to 30,000 years of war and turmoil. Fortunately, Seldon has a plan: He says nothing can completely prevent the upcoming Dark Age, but if certain steps — the establishment of a Foundation dedicating to accumulating all of humanity’s knowledge in an encyclopedia — are taken, the Dark Age will last only 1,000 years.

Big improvement, isn’t it? Try telling that to the Empire’s complicated ruling triumvirate of Brother Dusk (Terrence Mann), Brother Day (Lee Pace) and Brother Dawn (Cooper Carter as the younger version, and then Cassian Bilton). Seldon says his math is apolitical, but the Brothers deem him a threatening revolutionary.

As time passes, the action moves to several remote planets, and our protagonist becomes Salvor Hardin (Leah Harvey), the warden of the Foundation’s outpost on Terminus and one of several characters who share their name and almost nothing else with a character from the book.

When it’s committed to at least extrapolating on Asimov’s concerns, the show muses on the nature of power, whether dynastic or merit-based. It weaves through resonant subtext about resistance to short-term sacrifice in the face of long-term gain — be it climate change or vaccines, it’s easy to see how this relates to almost anything — and the tyranny and myopia of the one percent. How you convince people to set aside selfishness to fight for a distant future that they’ll never personally be a part of is the big question of Asimov’s premise. It’s a big question for any modern society, and something the Foundation TV series engages with only loosely. Instead, in its effort to placate the masses, the show is a bunch of glorified extras running around in a beautifully shot desert with their phasers set to “Pew! Pew!” mode.

The pieces don’t always (or even often) go together well. And while the time-jumping in Foundation is never confusing, the intercutting of storylines is sometimes spectacularly artless, a poorly motivated fight scene wedged in to keep episodes from being too talky, or a rudimentary poli-sci lecture draining momentum from the occasional bit of building suspense, all less than ideal for a show with a weekly airing pattern.

There are also exhausting efforts to shoehorn in recurring characters, especially those played by the cast’s few recognizable stars. Like everything else in this complicated adaptation, I understand what the studio notes would have been that led to some of these choices, which fail to bridge the gap between high-minded prestige drama and narratively breathless CW serial.

The actors, known and relatively unknown, do their best to cover for the bumpy patches. Nobody plays avuncular wisdom with hints of ethical compromise as well as Harris, and he’s very good as a sage counterpoint to Llobell’s open youthfulness. There’s a similar dynamic in Harvey’s early scenes with Clarke Peters, and later she has a strong foil in Kubbra Sait as the leader of a so-called barbarian army, whose similarity to Khan from Star Trek surely isn’t accidental. The interplay between Mann and Pace as imperious rulers has strong theatrical energy. There are parts of the second half of the season in which Pace, sneering and barking out royal proclamations with icy aplomb, and Laura Birn, as a regal attaché with a quickly revealed secret, are carrying the entire series.

Pace’s presence and his clear joy modeling Kurt and Bart’s stylish costumes made me think back several times to Tarsem Singh’s The Fall. The highest compliment I could pay Foundation is to liken its aesthetic to that of a less idiosyncratic The Fall. If the directors, starting with Rupert Sanders and continuing with polished veterans Alex Graves, Roxann Dawson and Jennifer Phang, struggle with pacing, the eye-popping look of the series remains consistent through 10 installments. The cinematographers, starting with Steve Annis, may change from episode to episode, but production designer Rory Cheyne and visual effects supervisor Chris MacLean remain in place throughout. Foundation is full of gorgeous worlds captured in Malta and the Canary Islands, distinctive palaces and temples, and such fascinating conceits as the mural that Brother Dusk maintains, with its subtly shifting paint.

Across the full 10-episode season, no hour of Foundation passed without multiple breathtaking compositions or pieces of well-considered visual world-building. Still, I needed more mind games and machinations, fewer literal tapestries and more tapestries of woven galactic history. The show provokes myriad instances of technical appreciation, yet rarely finds a way to be truly provocative.