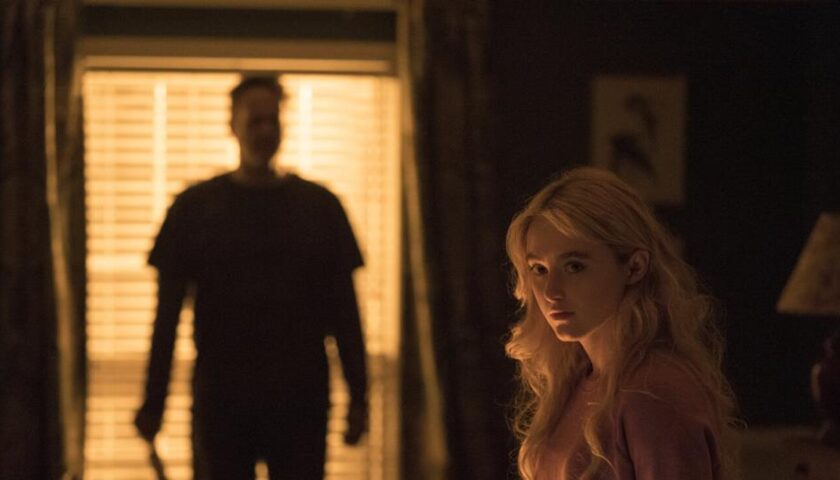 Freaky is a body-swap horror/comedy in which a remorseless serial killer played by the imposing Vince Vaughn exchanges bodies with his timid teenage Final Girl (Kathryn Newton). Directed with a sure hand by Christopher Landon (Happy Death Day) and produced by Jason Blum, Freaky is as pulpily enjoyable as its high-concept promises: it could have twisted the knife more effectively – or, as per one sequence, slammed the toilet lid on the victim’s head a little harder – but it’s got a cheerful, self-knowing vibe and, as a genre spin-off from Blumhouse/Universal, an eye to future iterations that might hopefully be a little knottier.

Set to release on Friday November 13 on all formats, Freaky delivers a high school horror mash-up centred around Homecoming which wears every single one of its forebears on its sleeve – from Scream to Carrie to, of course, Child’s Play, Big and all the Freaky Fridays. The pre-credit set-up (“Wednesday The 11th”) is classic: four bratty teens in a big old house alone at night talking about the Blissfield Butcher (Vaughn) who has struck every year at Homecoming but gone silent of late. They laugh him off as an middle-aged urban myth, but  pretty soon one has a broken bottle of Montrachet coming out of his throat, after which The Butcher makes good use of that toilet seat and a tennis racquet. He also steals a mysterious antique knife, so we’ve got a good idea of what might be coming next.

Freaky’s biggest failing is that it doesn’t try to innovate, relying mostly on our anticipation of Vaughn’s performance of a 17 year-old girl whose favourite film is Pitch Perfect 2 and has a hopeless crush on a soccer player. (Michael Myers’s scant background as the murderer of his sister is practically a thesis when compared to the motivations of the Blissfield Butcher, who kills teenagers simply because he hates them.) Vaughn, known as a comedian but last seen in the gruesome Brawl In Cell Block 99, doesn’t disappoint. Newton (Big Little Lies) also delivers the goods as a sweet Millie Kessler, whose family is still reeling from the death of her father a year ago. Timid and bullied, she has two friends she can count on: gay Joshua (Misha Osherovich) and black Nyla (Celeste O’Connor). At least they’re savvy enough to know they’re archetypes who might not survive the horror film they suddenly find themselves in.

After her needy, boozy mother (Kate Finneran) forgets to pick her up after a game, Millie encounters The Butcher and escapes, despite being hampered by a furry mascot suit. She wakes up the following morning to find herself trapped inside an ageing serial killer’s body, while all of The Butcher’s dreams have come true to spend his day in Millie’s high school surrounded by easy prey. She has 24 hours to find a way to return to normal before the switch becomes permanent, but it’s not easy, what with the city cops (including her sister, played by Dana Drori) chasing her down and her friends screaming every time she/he sees them.

Yet again in his career, Vaughn proves himself game for poking fun at himself: from a kiss with Millie’s crush to the enthusiastic hand jive, he’s not shirking his Freaky responsibilities, even if the script does give his character a little short shrift. Another attribute: you can’t kill him, which explains why the film slightly overstays its welcome at 102 minutes.

Freaky is pretty bloodthirsty when the chips come down – literally, on a woodsaw, as revenge is taken on a brutal DT teacher (Alan Ruck). What’s also interesting is how a young girl comes to realise the enhanced stature of men, both physically and mentally. There are a few ad libbed lines here which show where co-writers Landon and Michael Kennedy’s (Bordertown) sympathies lie as a woman finds her true self inside a man’s body. Further Freaky’s (and there will be more, undoubtedly) could do well to exploit that line of thinking even further into the identity ambivalence that might provoke, although mainstream teen horror probably isn’t quite ready for that – just yet.