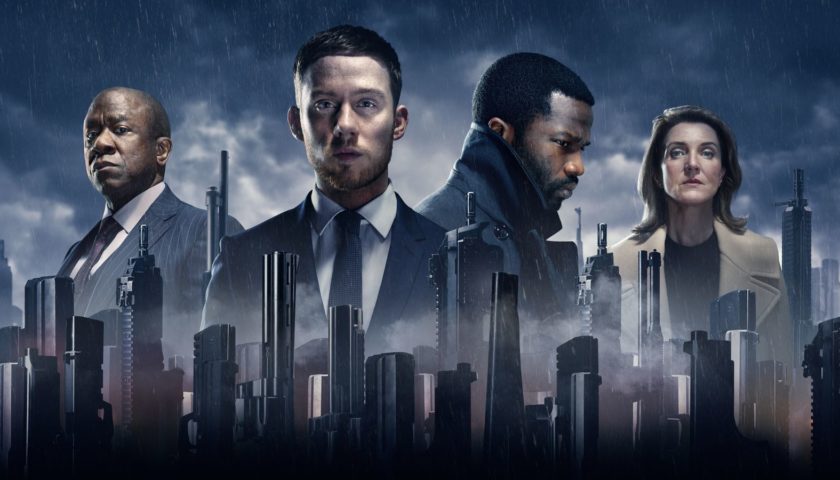 I had extremely high hopes for GOL and the trailer indicated all the ingredients were there for a cracking series and it certainly has far more positives but his underminded by a couple of weird choices and just lazy writing in a couple of places.

The plot really is very much Hamlet meets The Long Good Friday. The Wallace family have brought success and prosperity to the rival Gangs of London by keeping the peace and turning a tidy profit for all concerned but then the Father, Colm Meaney (Underused) is murdered by two gypsies set up to take the fall for a greater game at play it’s down to son Sean and his blood brother Alex of the allied Dumani family to resolve the mess and take revenge.

Told over nine episodes the first, of what I assume with be several seasons, primarily charts the downfall of the Wallace family but you don’t feel much sympathy for them, the Mother played by the excellent Michelle Fairley isn’t given too much to do until six episodes in and by then her actions feel largely redundant. The show is very much anchored around Sean Wallace, who is played by Finn Cole of Peaky Blinders fame, and as much as I like him, he just isn’t very convincing in his role and feels a little miscast. The incredibly talented Brian Vernel as brother Sean, has been given a character to play who is a drug addict and homosexual but has little else to do or say, although his role comes a little into play towards the end of the show. The Dumani family have the better written parts and for the most part the better lines with Lucian Masmati bringing an appropriate level of complexity in his role as the father. the stand out performance of the ensemble cast however must go to Sope Dirisu, an undercover policeman with a complex past who works his way into the family. The story itself involving the lives of several other clans all over London is for the most part handled well, but occasionally some things occur in the script which beggar belief in the world that has been created for these characters to inhabit and only go to undermine the work here. Without adding spoilers I will simply say for a 9/11 style event to happen in the financial district of London and cause no casualties even in the middle of the night, would simply be impossible and it was this point that the series went from being entertaining to feeling downright stupid. Now I felt as though I was in a bad Bond movie terroritory when the Mayor of London said ‘Fortuntely, there were no casualties…’ I mean didn’t someone say, perhaps we’d better cut that line, its dumb?

That gripe and a few others aside, this is for the most part a gripping and extremely well made show, with the gloss and spice on the action and violence that you would expect from Gareth Evans. While perhaps it was not quite what I’d hoped for, I will be along for the ride and look forward to seeing where it goes. If you turned off after a couple of episodes, go back, watch episode 5 and re-evaluate. No show with a sequence that good, could even be considered average. This will not be everyone’s cup of tea and it does seem to be the case that many love it or hate it, ultimately I thought it was good, just not as great as it could have been, but there’s a lot of cooks involved in making a show of this size, so to get a good result, is no small achievement.