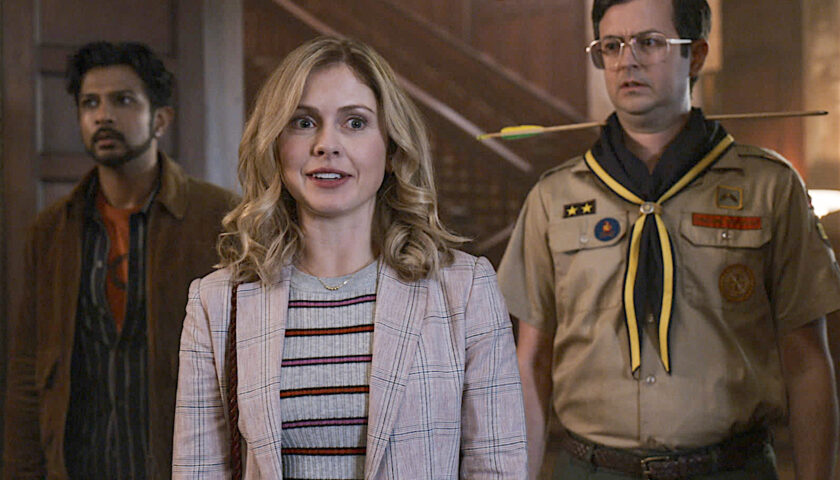 Ghosts is about a young professional HGTV-obsessed couple from New York who inherit a mansion from a late distant relative. Sam (Rose McIver) and Jay (Utkash Ambudkar) decide to move into the mansion and turn it into a bed and breakfast. However, as they’re attempting to make renovations, they discover a wacky group of ghosts living there.

It’s cute, sure. And, for those in need of some feel-good content to fill the afterlife void left by shows like The Good Place, Ghosts succeeds to a degree. The show finds the humor in death, unabashedly poking fun at mortality and the things we’re most afraid of.

Are people fully gone when they die, or is it possible to get stuck someplace between life and death? Ghosts plays with the idea of the in-between and asks, how do ghosts entertain themselves after centuries of being stuck in the same place? By watching paint dry, of course!

At first, we think the ghosts are there to hinder and haunt the living couple, and it’s clear that the house’s spooky residents don’t want the house to become a B&B. But that conflict takes a backseat to the comedy.

In the third episode, we think Sam and Jay helping the ghosts pass on (Ghosts calls it something much funnier, which we won’t spoil) could be a new point of the show. But it becomes clear that the number one goal of Ghosts is to make us laugh, which it only sometimes succeeds at.

What Ghosts does best is subvert the supernatural tropes we see frequently in spooky stories. For instance, in what would customarily be a haunting shower scene à la Psycho, a very jovial ghost appears moments after we expect him to.

Ghosts plays on iconic movies like The Sixth Sense, exploiting what we expect from ghostly narratives for comedic effect by subverting our expectations. For instance, revealing who is alive and who is dead is a source of humor, not horror. In one scene, Sam thinks she and Jay are about to run over an elderly couple but then Sam says, “Oh, phew, they’re already dead.”

In one of its best moments, Sam burns sage — a fabled cleanser of evil spirits — in the mansion. But instead of running from it, the ghosts enjoy the scent of sage and are drawn to it. One ghost reminds everyone, “There’s enough spirit-repellant for all of us!”

Though Ghosts has its moments, it fails to do what the BBC version did so successfully. American television often fumbles when representing the classist struggles that BBC shows demonstrate, and Ghosts is no exception. The ghosts in the mansion all come from different periods in history: there’s a prohibition-era lounge singer and an 1800s society woman.

Then there’s a Native American, a Viking, and a 1980s Boy Scout troop leader with an arrow through his neck. And let’s not forget the 1960s hippie who was attacked by a bear while tripping on acid, the 1700s Militiaman, or a 1990s pantsless finance bro. (There is also a group of “plague ghosts” living in the basement, who are equally as funny as the characters above, but much more terrifying.)

Between all their differing backgrounds, the ghosts’ only common ground is that they’re dead and stuck in the mansion. The show makes very little effort to bridge their gaps, and instead pokes fun at their differences.

The Native American character, Sassapis, is tired of living with this relatively privileged and ignorant group of ghosts and their jokes about his past that simply make light of the plight of indigenous people. The fact that the Hudson area, where the B&B is located, is occupied Lenape land even becomes a passed-over joke instead of an actual reminder of the horrors behind colonialism.

The most jarring characters, however well-portrayed, are the poorly written Isaac, the Militiaman, and Trevor, the 1990s finance bro. Played by the hilarious Brandon Scott Jones (known for portraying gossip columnist John Wheaton on The Good Place), Isaac is openly flamboyant, but not openly gay. Unfortunately, the jokes about his sexuality are nearly as antiquated as the time the character comes from: the 1700s.

Trevor, on the other hand, is played by a very charming Asher Goodman. The writers know how to make likable characters, so we tend to root for him and empathize with him… But then he makes inappropriate remarks about women, referring to Sam as “that body” and “the hot chick.”

And, he frequently tries to win her over in the sleaziest ways possible. Both Isaac and Trevor, by no fault of the actors, are not only unfunny but downright offensive.

Ghosts succeeds in exploring death and the afterlife in an inventive way; it basically makes ghosts likable without making them tragic. It turns a house full of ghosts into a workplace-esque comedy in which even ghosts can annoy each other, make fun of each other, and try to find common ground.

However, its jokes are mostly trite and its characters’ hardships are played for cheap laughs; lazy punchlines and cliché jokes subsist where three-dimensional characters and narrative development should be.

But perhaps this could change; the 1800s society woman, Hetty (Rebecca Wisocky), shows some growth when she starts to move past her dated ideas about a woman’s place in society. Written much more successfully than Isaac and Trevor, the jokes around Hetty’s character are about how backward her values are.

Like Parks and Recreation, every character is likable (which, of course, is one of the series’ faults when it comes to Trevor). So if you’re looking for an easy-to-watch comedy and can overlook some overdone and inappropriate jokes, as well as a lack of character development, tune in to CBS on Thursdays at 9 p.m. EST starting on Oct. 7.