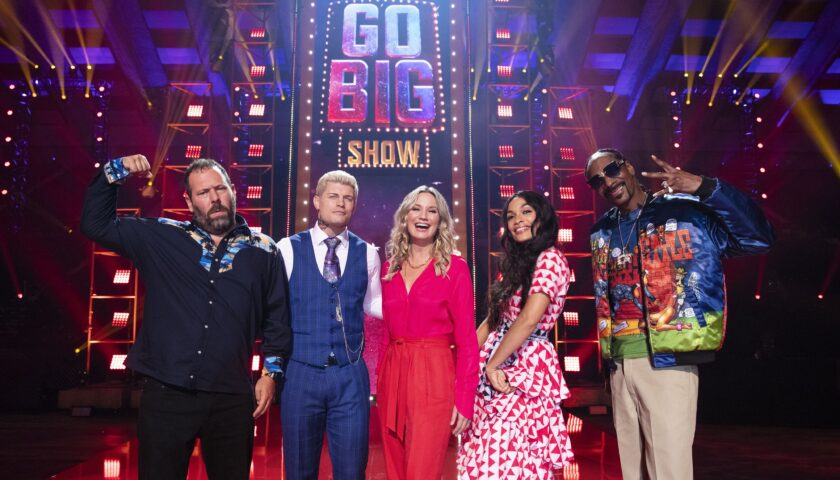 Snoop Dogg is bringing out the Go Big Show on TBS and viewers are stoked to see what TBS has planned for tonight. The network has been showing off the talent competition during commercial breaks for All Elite Wrestling weekly. They’re promising an entirely different spin on shows where people show off what they can do for a nationwide audience. Snoop is a central personality, so of course, they’re focused on him and Cody Rhodes at every turn of the process. NBA legend Shaquille O’Neal even decided to chime in on what they were building over on TBS. There’s a $100,000 cash prize for the finale and winning the entire thing, so many will be tuned in to see what all the fuss is all about. Unlike some other talent-based programming, the stunts seem to have been ratcheted up to 11 for the Go Big Show. Check out the short clip of tonight’s action on TBS.

“’Go-Big Show’ is the most extreme talent show ever that will bring you to the edge of your seat. With jaw-dropping acts so big only a coliseum could hold them, the series spotlights everything from giant ramp jumpers, horse trick riders and incredible feats of strength to alligator and rattlesnake wrestlers, stunt archers and world-record holders.”

“The series is a celebration of the most daring acts as they battle head-to-head to impress the judges and advance toward the finale’s ultimate $100,000 prize or go home. Bert Kreischer hosts “Go-Big Show” with celebrity judges Snoop Dogg, Rosario Dawson, Jennifer Nettles and AEW’s Cody Rhodes. In consultation with local authorities, the unions and medical experts, the series was produced at the Macon Coliseum, where contenders and staff operated under strict Covid-19 safety protocols and isolated together for the duration of production.”

Everything about the show was extreme. So, I think shooting during COVID for the first season was totally appropriate. We were literally in a bubble. Where we shot it, there was a hotel architecturally connected to the arena. We would sleep in the hotel and walk to the set. We were tested three times a week. It was pretty wild, but you have to be vigilant. I’m so appreciative of the lengths TBS took to make sure we were all safe during the whole shoot.