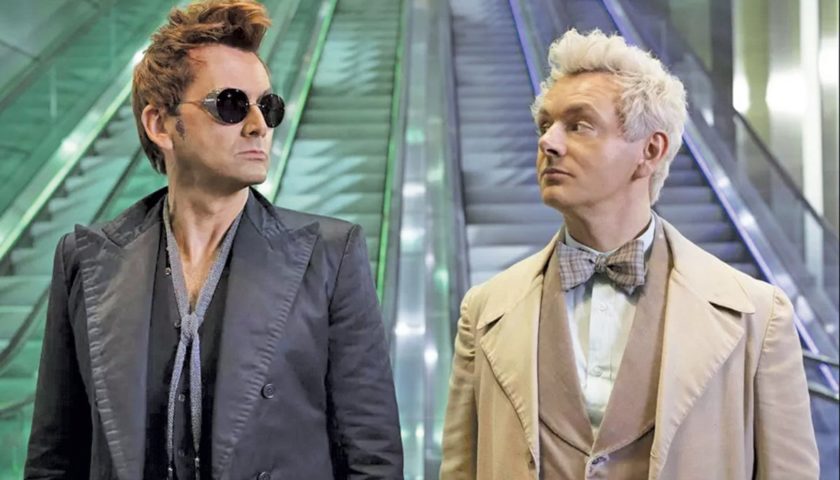 Review: Before delving too deep into the delightful, intoxicating world of Amazon’s new series, Good Omens, first this: Suzanne M. Smith. She cast this beauty, and David Tennant and Michael Sheen are a fantastically fun dynamic duo, joining Sandra Oh and Jodie Comer from Killing Eve as television’s most magnetic pair of leads at the moment. But Good Omens also has a wonderfully deep cast and, beyond the ones mentioned soon enough, you will find a number of ridiculously spot-on cameos from actors (not spoiled here, since that’s part of the fun of the series) who seemed to be having an enormously great time while making this limited series (though a second season is not off the table).

Based on the book Good Omens: The Nice and Accurate Prophecies of Agnes Nutter, Witch, by esteemed writers Terry Pratchett (Discworld) and Neil Gaiman (American Gods, The Ocean at the End of the Lane), both of whom are legends in the fantasy world (and Gaiman beyond), Good Omens was a labor of love that finally came about, Gaiman has said, because one of the last things Pratchett told him before his death in 2015 was to make sure a filmed version became reality.

It finally has, with great world-building fantasy glee, as Gaiman wrote all six episodes and shepherded the complex (and funny) story to an end that works both as a full conclusion should he not want to write a second season (Gaiman has a lot of projects) and as a pause before a logical second season. The series was directed entirely by Douglas Mackinnon (Sherlock, Doctor Who, Line of Duty), giving it visual panache and, when the fantasy elements call for it, visual humor as well. The end result is a feel-good romp and creative triumph that is easily digestible and never flags in search of entertainment.

Riffing on (and debunking) biblical themes, Good Omens is primarily the story of Aziraphale (Sheen) and Crowley (Tennant), two angels we first meet guarding the Garden of Eden. In creative flashes both forward and backward, we quickly find out that Crowley (formerly Crawly when he was a snake) quickly became a fallen angel and is now, well, a demon. He’s serving Satan, while Aziraphale is serving God, and both of them are ambassadors on Earth, which as you know is a mere testing ground for humans and the prequel for the ultimate war between heaven and hell, good and evil.

While that grand plan — “ineffable,” in some ways, as Aziraphale notes — is sliding through the centuries to its beginning, with the birth of the antichrist and the end of the world, Aziraphale and Crowley happen to realize that it might not matter what they do.

“So we’re both working very hard in damp places and we’re just canceling each other out,” Crowley notes, after years of essentially sitting on the shoulders of humans, either guiding them to bad things or keeping them from that temptation. “It would be easier if we just stayed home.”

And so the two end up becoming, at first, complicit in a scheme to cover for the other and make their long lives easier. And then they become friends. And then they become the best of all friends. And it’s no stretch at all to imagine, after you’ve seen all six episodes of Good Omens, that this might be one of the most convincing, lovingly told (if chaste) gay love stories in TV history.

But in the meantime, that friendship is funny, with Sheen’s Aziraphale becoming something of a legendary gourmand (once almost falling to the guillotine when he left England for a good meal in France) and Tennant’s Crowley being something of a glamorous rock star, in all-black, driving fast cars and finding creative if not very painful ways to torture humans (like the M25, the London Orbital Motorway, which is a traffic nightmare, or knocking out cell reception periodically in all of England, etc.). In hell, Satan’s minions are mostly a gross lot, with peeling skin, hordes of flies around them or frogs and other animals on their heads, with drab, stinking clothing, while Crowley is all swagger and suave. Both angel and demon, it turns out, kind of love Earth and the people who are creating things in it. And so they want to protect it from the coming end.

Though Good Omens leaps around with creative abandon, the main story is the birth of the antichrist 11 years ago (the exact nature of when “now” is remains unclear, but there are iPhones, if that helps) and how, through a series of “human” errors, the plan to switch the baby of an American ambassador (Nick Offerman) with said antichrist goes awry. The story also involves the most prophetic and accurate witch ever (played to many moments of wry smiles), which helps guide her ancestors and many others here. Too much more of the plot will spoil the ensuing fun, plus it’s not exactly easy to explain the whimsical choices that Pratchett and Gaiman made in the book (though this series, thanks to Gaiman, never seems too complicated and each new twist is often absurd enough to just go with).

The entire thing is narrated by Frances McDormand as God. As they go about their business on Earth, Aziraphale reports to the Archangel Gabriel (Jon Hamm), and Crowley reports to Beelzebub (Anna Maxwell Martin), while being tormented by one of hell’s watchers, Hastur (Ned Dennehy), who assumes, correctly, that Crowley isn’t really spreading evil and converting people on the planet the way he should be.

But as others conspire against them (and, of course, the world is about to end in 11 days), Crowley and Aziraphale, disparate souls, need each other more than ever. It’s a testament to Good Omens and, as noted above, Smith, that while all the madcap plot twists and eccentric cameos keep things humming right along, it’s the performances of Tennant and Sheen that make every minute they are in it stand out. While Tennant gets the juicier role, exaggerating his walk to be half runway model, half rock god, with flowing redheaded locks and steam punk sunglasses, that only works as it does because of Sheen’s delightfully worried, stammering sweetness (and Aziraphale’s love of fine but staid clothing), constantly worried about the rules they are breaking to stave off the war of heaven and hell.

These two actors are so emphatically into their roles that they make the hourlong episodes fly by and the absolute need for a second season apparent — if for nothing else than to watch further tales of this disparate duo meeting throughout history to enjoy each other’s company.

Your willingness to embracethe show will probably rely, beyond those two magnetic performances, on your interest in fantasy and sweet-natured comic absurdity, not unlike what unfolds in, say, the Harry Potter movies with just enough snark and cynicism to nudge it toward sharper angles (though coming up plenty shy of something darker like Lord of the Rings).

But much of the fun in Good Omens comes from the over-the-top fantastical elements and how the various surprise cameos (and others best left for their own discovery) make everything feel buoyantly, giddily surreal in a tale well told. Listen, this is a story that not only involves the modern-day appearance of the Four Horsemen of the Apocalypse (Pestilence is replace by Pollution), two of which are played by women and all of them on thundering motorcycles, but also the appearance of the Kracken and the rise of the Lost City of Atlantis. So if that’s going to be a problem for you, maybe look elsewhere.

Everyone else who is all-in should not only devour Good Omens but hope that Gaiman and Amazon can make a second season miraculously appear.