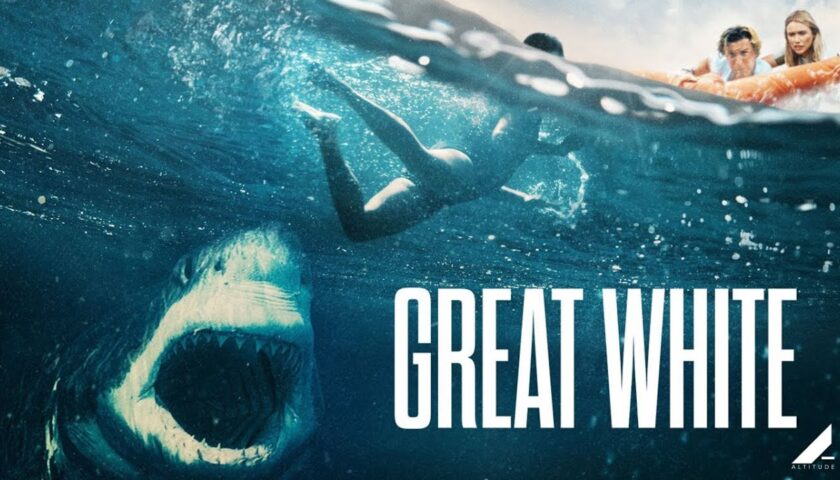 It doesn’t bode well for the success of your shark thriller when the audience wills the sharks to win. But such is the case with Great White, Martin Wilson’s generic, chomp by numbers schlock with its above-average cinematography, tedious characters and baddies that you’ll genuinely root for just to make it stop.

Kaz (Katrina Bowden) needs things to change for the better. In nine months her life is going to be very different but the laissez-faire attitude of her former marine biologist boyfriend – and budget McConaughey – Charlie (Aaron Jakubenko) doesn’t exactly scream secure future, their seaplane rarely climbs above the dock and the phone is ringing off the hook with calls from the bank.

How fortunate then that a last-minute charter for wealthy newlyweds should fall into their laps. Michelle (Kimie Tsukakoshi) and Joji (Tim Kano) are clearly wrestling tensions of their own; he is possessive and tightly wound and she appears to be counting down the days until their holiday is over. A trip to Hell’s Reef sounds just the ticket for both happy couples…

As if the destination was not a sufficient foreshadow of the fun to come, Michelle literally carries the ashes of a family member who was the sole survivor of A Very Bad Thing at Hell’s Reef several decades ago. Add into the mix chef Benny (Te Kohe Tuhaka) – whose sole purpose is to highlight Joji’s jealous streak for a payoff later – and our shark buffet is complete.

The cast bimble through a few heroic/catastrophic plot points before we hit the salient set up: with their seaplane destroyed, five passengers are adrift on a raft 100 miles from shore, encircled by sharks and cliches. Resentments bubble up alongside the requisite blood in the water and people you didn’t really care about in the first place begin to die at a pleasingly brisk rate.

It is unlikely that you will mourn the dead. The CG great whites are far more convincing in their roles than the human cast who are uniformly unlikeable, flimsily written and forgettable. Their trauma and personal dynamics playing out in such close quarters could have made for an interesting watch had Michael Boughen’s soapy screenplay dug a bit deeper. It does not.

Instead, the chum we are left to feast upon is idle speculation about the next to die and a more entertaining ponder about how much better Great White would be if it were shot from the sharks’ POV. Because Tony O’Loughlan’s cinematography really is one of the only highlights of an otherwise tedious B-movie. From high above and far below Great White isn’t half bad.