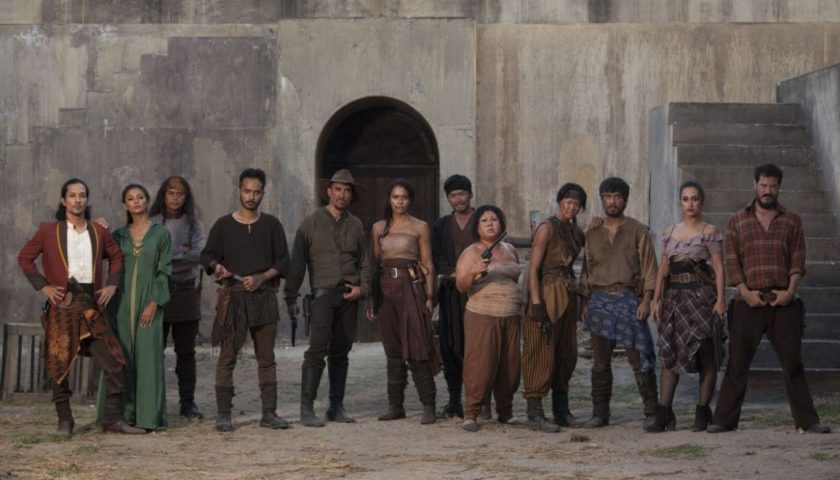 Review: Showrunner Mike Wiluan’s description of HBO Asia’s new period drama, Grisse, is pretty apt. After being shown the teaser trailer to the 8-part hour-long series, Grisse can be best described as a western being set in a South-east Asian melting pot, paying plenty of homage to Quentin Tarantino.

Set in the mid 1800’s, during the colonial era of the Dutch East Indies, Grisse is based on an Indonesian town called Gresik, which was a garrison for the Dutch back in the day. The story revolves around a band of unlikely individuals coming together, to overthrow the tyranny of their Dutch overseers.

Given the time period and setting, production of the series is an Asian one, filled with actors from Singapore, Malaysia, Indonesia, and Japan, coming in to fill the colourful inhabitants of Grisse. Closer to home, we have local show host and comedian Hossan Leong, as well as Malaysian comedian, Joanne Kam, who take on the roles of the saloon operators in the world of Grisse, with Kam as the mamasan (mistress of a brothel), and Leong as her steward.

The biggest challenge for the both of them was to tone down on the comedic elements to better suit the tone of Grisse.

“As comedians, we tend to be more expressive in certain areas, so there is a process (to learn) how to keep it within the range and contain it, so as to not be too overboard.”, said Joanne at a press conference on the set of the show. “But what is nice is that there is strong storytelling in the script. The story is so compelling, that we do not just become the comic relief. We can use our talents in a different way, to show more range in our acting instead of just comedic acts.”

When dealing with the fight scenes and dealing with weapons, Hossan had one thing to say with great enthusiasm, “I’ve never thought I would say this, but THANK GOODNESS FOR NATIONAL SERVICE, I can fire a gun properly!”

Grisse has been the most intense production they have both been in, in terms of the character and story, and has greatly helped in developing their acting skills to be more all-rounded.

The chemistry between stars is rather infectious, and it is most apparent between Jamie Aditya (Indonesia) and Jimmy T (Singapore).

Jamie stars as a South African misfit who ends up in the town of Grisse, and he stays in character throughout the interview, speaking with his character accent. Jimmy, on the other hand, is a ronin in Grisse, a serious no-nonsense character.

“But I’m quite sure that would be used for one of the episodes, I hope.”

Ully Triani and Marthino Lio bring a more mature air around them as they sit down for their interview, in stark comparison with the funny antics of Jamie. Grisse is Ully’s first English-speaking role, and it has been a challenge for her. However, the cast and crew have been very accommodating, and they frequently rehearse together in between takes, just to perfect her lines.

Marthino’s biggest concern was about the weather, “The challenge, over everything else, is the heat. It got up to 48 degrees Celsius, and when filming in costumes, everyone was sweating and emotions are high. When it’s 48, you yell at people.”

While on the set tour, we bumped into Toshiji Takeshima, fresh off a take. In the show, Takeshima plays a samurai working as a mercenary for the Dutch.

Due to him being involved in multiple action scenes, he reveals that it has been an enjoyable experience filming Grisse, but it does not come without any “souvenirs”. He points to a horizontal scar on his nose bridge and shakes his head. We later find out that his scar was caused by co-star Jimmy T, during a fight scene.

The stunt team who worked on Grisse treated us to an inpromptu performance just as we were done for the day. That team is made up of Thais and Indonesian stunt masters, who have done fight choreography for action movies such as Ong Bak and The Raid: Redemption.

The professionalism in their craft is clearly displayed as they performed a short fight scene for us, showcasing their proficiency in hand-to-hand and armed combat.

Grisse is shaping up to be an action-packed series, and it promises interesting storylines and plot-twists to keep its audience glued to their screens. It also brings hope for more big-budget productions to be based in Asia, to capitalise on the rich history and culture that this region possesses.

It is also one of the many collaborations HBO Asia has with the Infocomm Media Development Authority, as part of a two year partnership.

Grisse is set to premiere in the second half of 2018.