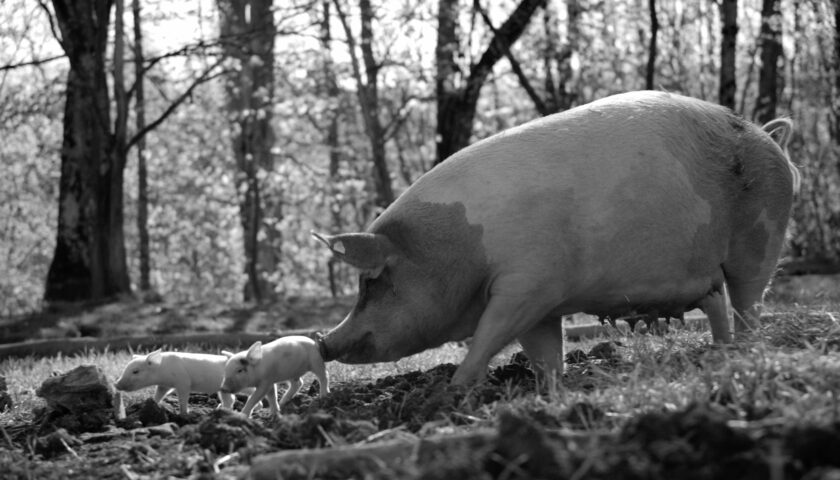 Experiential cinema in it’s purest form, “Gunda” chronicles the unfiltered lives of a mother pig, a flock of chickens, and a herd of cows with masterful intimacy. Using stark, transcendent black and white cinematography and the farm’s ambient soundtrack, the film invites the audience to slow down and experience life as his subjects do, taking in their world with a magical patience and an other worldly perspective. “Gunda” asks us to meditate on the mystery of animal consciousness, and reckon with the role humanity plays in it. In the film’s opening sequence, the titular sow gives birth to a litter of squealing piglets, and over the next several segments, the film follows Gunda and her offspring as they begin to explore the world around them. Yet one is keenly aware that Gunda and her offspring are part of a man-made system of supply, and human intervention looms, unseen and mostly unheard, over the film like a specter. Gunda is the protagonist of this gentle black-and-white documentary triptych. She takes care of her little ones, accompanies them on a journey of discovery and then takes a break to recharge her batteries.

She tentatively approaches the camera. Gunda is on the screen for over half of the runtime of the final film and is an extraordinarily powerful character; you do not need an interpreter to understand her emotions and experiences. Does she know what her fate is? What might she be thinking? What does she think of us? Gunda is one of several hundred million pigs that inhabit the planet, alongside a billion cattle, represented in the film by two gracefully mooing cows, and over 20 billion chickens, exemplified here by a one-legged chicken stumbling its way through the world. Whether rooting through the mud, swatting away flies or searching for worms, they all are heroes. A mother sow, two ingenious cows, and a scene-stealing, one-legged chicken, remind us of the inherent value of life for all beings. By returning a pig’s gaze, listening to a cow’s gentle lowing, or observing a chicken find it’s wings, “Gunda” voids any pretension that we’re unique in our capacity for emotion, consciousness or will. Immersed in these animal’s lives, lived to the full in joy and pain, it becomes inescapable that humankind must swiftly undertake the major changes necessary to end mass exploitation of our fellow creatures.

Our indignation about the ignorance of humans in general and the degradation of these creatures in particular flows into his conceptually minimalist, but visually brilliant meditation. An intervention in the form of a modest gesture. A film that ascribes majestic greatness to the underdogs. And makes us think. In the very least, the vastness of the living world, we share our planet with billions of farm animals. However, in industrialized societies we’re conditioned to ignore the sentience of these animals, often regarded as a passive resource. Audiences accustomed to the cuddly, anthropomorphic barnyard animals in films like “Babe” and “Charlotte’s Web” may be startled to see pigs in a fresh light. The up-close, fine-grained detail of the film’s black and white images proves these creatures to be as complex and fascinating as their wild counterparts. The documentary forces us to reconsider our relationship to the humble yet majestic creatures that we think of as food.

For a few hundred years, it’s important to establish respect for the value of human life. It took centuries to even acknowledge that all human beings deserve the same rights. Perhaps now we can take the next step and admit that every living creature has similar rights. Pigs, butterflies, elephants , all of them have the same rights to live on this planet. We shouldn’t always put ourselves in the center. We can do better than that. We’re not totally awful. We did eventually come to the conclusion that slavery was unjust, we’ve started to respect the rights of women, of people of different genders, and to me that’s a sign that we’re increasing our understanding of the world. The film focuses on the conflict between human activity and it’s environment. There absolutely is a common thread. Historically there’s an overall acceptance by humanity that we’ve dominion over non-humans, that their lives are inherently less valuable than ours. History is written by the victors. We won the history of the earth for now, but who knows what happens next.

The idea is very simple; we as humans are ready to change our attitudes to our fellow beings. That might be a very optimistic perspective, but at least there are some hints as to why it might be possible. Our entire treatment of animals is based on misconception. In some countries there are laws statin outright that animals don’t suffer, it’s written into the very fabric of the law. This is absurd. Everyone who’s in regular contact with animals knows that they feel, they’ve emotions, they’re conscious. We know this is the truth but have tacitly agreed to disregard our empirical knowledge. Instead we deny them their natural lives. If people believe that humans have souls, they should agree that animals have souls too.

Documentary cinema is a great tool to show the realities of the world, to show things that we do not see by ourselves, that we do not want to see, or that we’ve collectively agreed that we do not see, and so we allow ourselves not to think about. “Gunda” is a mesmerizing perspective on sentience within animal species, normally, and perhaps purposely, hidden from our view. Displays of pride and reverence, amusement and bliss at a pig’s inquisitive young; her panic, despair and utter defeat in the face of cruel trickery, are validations of just how similarly all species react and cope with events in our respective lives.

The film crafts a visceral meditation on existence that transcends the normal barriers that separate species. It’s a deeply attempt to renew our vision of life and meditate on the mystery of all animal consciousness, including our own. “Gunda” is a film without patronizing or humanizing them, without any sentimentality, and without vegan propaganda. We cannot stop people from doing what they do, but perhaps we can at least make them look more closely at what it’s they’re denying or destroying. Films cannot change this world, but still we feel we’ve to do something.