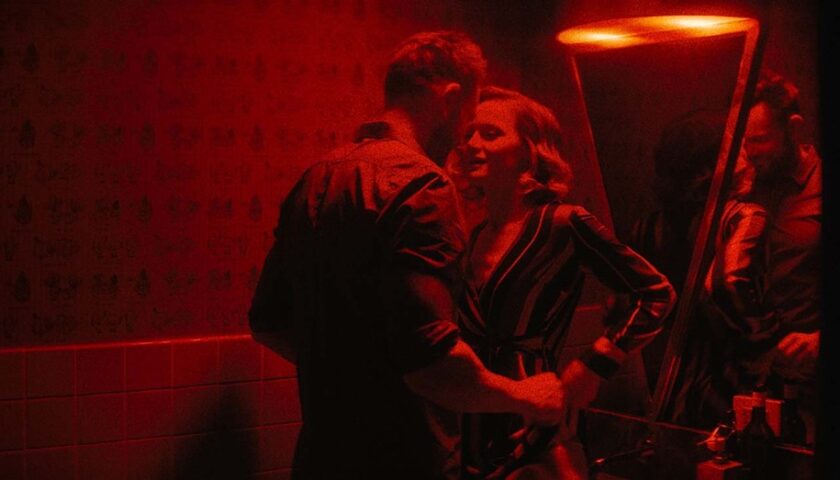 Joel McHale and Kerry Bishé play a long-married couple who discover that their friends are bitterly resentful of their happiness in this black comedy produced by Jack Black.

The saying “It’s not enough to succeed, others should fail,” or its numerous variations, has been attributed to figures ranging from Genghis Khan to Gore Vidal. Whoever said it, however, was speaking with infinite wisdom about the human condition. The adage is illustrated to witty, darkly comic effect in BenDavid Grabinski’s directorial debut which attempts to infuse a romantic tale with strong doses of Twilight Zone-style strangeness. While Happily doesn’t fully succeed in coherently weaving together its numerous surreal plot twists, the stylistic assuredness on display marks its tyro filmmaker as a talent to watch.

The film revolves around Tom (Joel McHale, Community) and Janet (Kerry Bishé, Halt and Catch Fire), a couple who have been happily married for fourteen years. So happily, in fact, that they continue to enjoy the physical passion of newlyweds, often in not-too-subtle fashion. It’s a trait that hasn’t exactly endeared them to their friends involved in less blissful relationships. In fact, it causes them to be disinvited from a forthcoming getaway involving four other couples spending the weekend together at a luxurious rental house. “Everyone hates you,” one of their friends tells them by way of explanation.

The film’s ingenious plot is set in motion by the arrival of a mysterious stranger, the ironically named Mr. Goodman (veteran character actor Stephen Root, employing his trademark deadpan demeanor to devilish effect), at Tom and Janet’s home one night. Explaining that their continued happiness after so many years of matrimony is clearly a design flaw in the universe, he offers to make them “normal” by injecting them with a mysterious green serum contained in scarily large syringes. In response, Janet impulsively bludgeons the unwelcome visitor to death. Tom, naturally, is fully supportive. “I forgive you,” he says reassuringly.

After being reinvited without explanation, the couple join their friends for the weekend getaway, and things only get stranger from there. For a while, we become immersed in the interpersonal dynamics of the various couples, including Tom’s ex Karen (Natalie Zea) and her husband Val (Paul Scheer); couple Maude (Kirby Howell-Baptiste) and Carla (Shannon Woodward); the weekend’s organizer Patricia (Natalie Morales) and her nebbishy husband Donald (Jon Daly); and the newly engaged Gretel (Charlyne Yi) and Richard (Breckin Meyer).

The simmering tensions among the quintet soon become apparent in subtle and not so subtle ways, the latter illustrated by Karen’s repeated attempts to seduce Tom, who, for a while at least, resolutely resists her blatant overtures. More strangely, he also turns a cold shoulder to Janet when she tries to engage him in their customary randiness. “We don’t have to keep up appearances,” he tells her.

The modernistic house virtually serves as another character, with its eccentricities including a room featuring a well-stocked gun collection. The recently deceased Mr. Goodman rematerializes as well, both in the form of a photograph that suddenly appears on a wall and in-person at a local supermarket, much to Janet’s horror.

It all leads to the film’s most effective sequence, depicting an impromptu group therapy session in which numerous secrets are revealed to acerbically comic effect, followed by a raucous conclusion in which the group attempts to flee the house that seems violently intent on keeping them there.

Grabinski — whose primary credit is writing and producing numerous episodes of the Nickelodeon horror anthology series Are You Afraid of the Dark? — infuses the outlandish proceedings with ample visual stylishness, abetted by Adam Bricker’s arresting cinematography and Jennifer Moller’s striking production design. The eclectic soundtrack, featuring an array of vintage ’80s pop tunes, proves another asset.

But not as much as the terrific ensemble, who deliver expertly calibrated comic performances suffused with enough dramatic tension to keep the viewer consistently on edge. McHale is particularly good at this balancing act, giving a restrained turn that makes his character compellingly edgy. (It’s also easy to imagine Jack Black, one of the film’s producers, in one or more of the roles, although he may not have fit in with the ensemble as smoothly.)

Ultimately, Happily seems to bite off more than it can chew, proving more successful in its insightful exploration of relationship dynamics than its bizarre storyline. That few of its narrative mysteries are resolved is obviously meant to be purposefully ambiguous, but the results are finally more frustrating than intriguing.