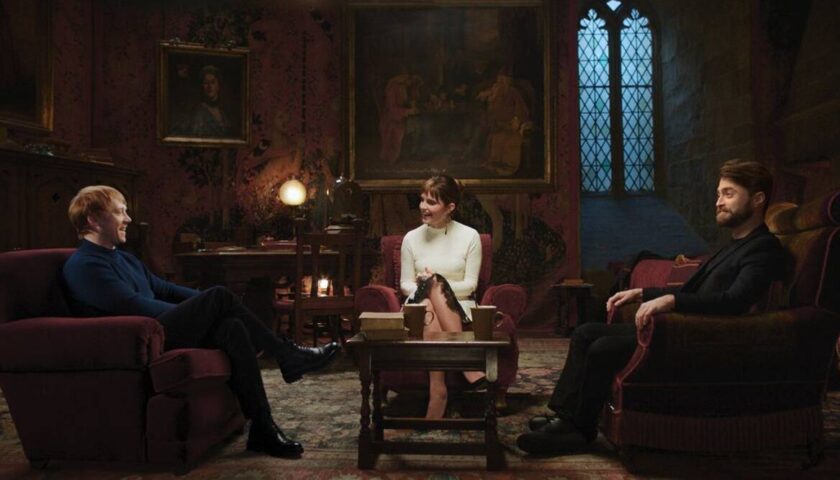 This had all the nostalgia and emotion the fans hoped for, and it was a delight to see so many favourite actors returning to the magnificent film sets.

I loved that directors and producers also made appearance, with the show acknowledging their crucial contributions to this magical universe. Though certain absences were felt, it was fantastic to see so many of the other incredible actors, including Tom Felton, Helena Bonham Carter, Jason Isaacs and Ralph Feinnes. Seeing the main three actors – Daniel Radcliffe, Emma Watson & Rupert Grint – reminiscing together in the Gryffindor common room was particularly special.

Something which stood out the most was how authentic the cast and crew were. It’s clear that the Harry Potter series has shaped their own personal lives as much as it has the viewers’; this adds a layer of authenticity to the films, knowing that the actors genuinely believed in the characters and their stories.

Admittedly at times it felt quite disjointed, as it would cut between conversations of the cast having conversations in pairs or threes. It did sometimes feel like more like an assortment of individual interviews rather than a special reunion experience. Understandably, this may have been COVID related.

The show included dedications to cast and crew that had passed away since the production of the films, obvious time constraints meant these were too brief. Alan Rickman in particular played one of the most pivotal roles in the entire franchise yet had only a minute or two of recognition, and I believe he deserved considerably more for his incredible contribution to this film series.

The JK Rowling situation was handled well: the show included relevant short clips of previous interviews with her. Politics aside her contribution to this beloved franchise was fairly acknowledged.

Harry Potter has so much meaning to so many individuals that it couldn’t all be covered in a 90 minute show, so overall it did feel like some things were missing. Nonetheless, what it did beautifully portray was how much joy and positivity Harry Potter has brought, and will continue to bring, to children and adults across the globe.