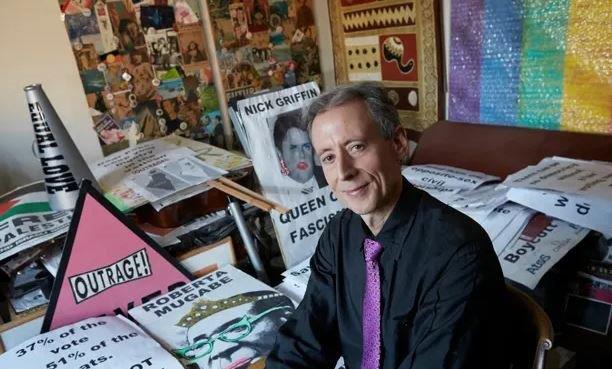 Human rights campaigner and gay rights activist, Peter Tatchell has been in the public eye for more than 50 years.

Now a new Netflix documentary film focuses on his life, his work and his often headline-grabbing campaigns.

Despite the impression the title may give, Tatchell is involved in the film — he has been interviewed by Sir Ian McKellen as part of the programme.

Read on for everything you need to know about the documentary.

Born in Melbourne, Australia, in 1952, Tatchell began his political career as a teenager, launching campaigns in support of Australia’s Aboriginal people, against the death penalty, and against the American and Australian involvement in the Vietnam War.

He moved to London in 1971, and became a prominent campaigner for gay and human rights, helping to organise Britain’s first Gay Pride march in 1972. Tatchell has also taken part in many campaigns since, some of which have proved to be controversial. In 1998 he led an OutRage! protest that disrupted an Easter sermon given by George Carey, the Archbishop of Canterbury (who appears in the documentary), for which he was arrested and prosecuted under the Ecclesiastical Courts Jurisdiction Act 1860.

“I didn’t abuse the Archbishop or insult the church,” Tatchell said in court at the time. “I didn’t attack the Christian religion. I simply said that Dr Carey supports discrimination of lesbian and gay people and detailed the various ways in which he opposes lesbian and gay human rights.”

Tatchell’s activism angered not only the church and the state but also the media, and in the 1980s he was dubbed ‘the most hated man in Britain.’

His work as a campaigner includes protests to lower the age of consent laws and action criticising capital punishment in Iran. Tatchell also writes numerous articles for newspapers and magazines, and his papers on gay rights and activism are held in the Hall Carpenter Archive at the London School of Economics.

Hating Peter Tatchell is the story of the human rights campaigner and activist. It follows his battles with the establishment that have taken place over half a century.

Sir Ian McKellen interviews Tatchell and tries to find out what has inspired, motivated and fuelled his assault on what he perceives to be the prejudices of the British establishment. The film also includes comments from notable names including former Archbishop of Canterbury George Carey and actor Stephen Fry, and features archive footage from Tatchell’s career.

The documentary also picks up the story of Tatchell’s  crusade to draw attention to the persecution of LGBTQ+ people in Russia and Chechnya, by seeking to disrupt the FIFA World Cup in Moscow in 2018.