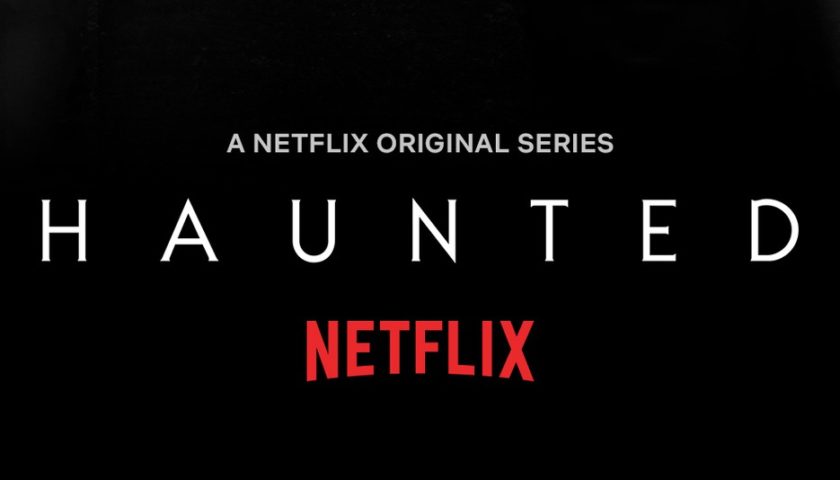 Review: Haunted is a brand new Netflix Original series available to watch immediately on the streaming platform. It is a short series, containing just 6 episodes that are around 25 to 30 minutes long.

The series’ big selling point is that it is based on true stories. Netflix describe Haunted as “real people share true stories of terrifying hauntings and unexplained phenomena via emotional eye witness accounts and chilling re-enactments”.

Each of the 6 episodes are dealt with in the same manner, a collection of people are gathered around, sitting in chairs in a dark study. One or more of these are the affected person and they tell their story to the group. The group is mostly made up of other family members or friends who listen intently as the main character explains the horrors they have gone through. Or are still going through. During the retelling, we are treated to visual re-enactments of what they are describing. They key to a lot of this is that at the beginning of every single episode, one line is displayed on screen.

This following is a true story!

The Woman in White is first up, telling the story of a boy who was haunted, rather than a house. After moving to a location where a woman had recently killed herself and her child, the ghost latches on to him and torments him for the rest of his life. In the Slaughterhouse, we see two young girls getting abused by their sick and twisted father, who also happens to be a serial killer. He picks up what he calls “strays” and horrifically murders them. Eventually the father is no more but the house still stands and is believed to contain his dark spirit. The house is full of tokens of the dead yet a grandchild has taken it on as his own home. In the present, the sisters and grandson tell their stories while one of the sisters pleads with him to destroy the place once and for all.

Demon in the Dark shows a young girls being tormented by a demon or something. It turns out that in the families history, they had a long dead relative who was obsessed with the idea of calling forth a demonic spirit. Unknown to him, he was successful and this young lady is feeling the full force of it’s presence. Episode 4 is called Children of the Well. It focuses on an old house, with a well in it’s basement. It turns out that three young children died in that well and are now haunting a young boy, trying to encourage him to come down and play with them.

Alien Infection comes next and tell the story of a young woman who believes she was abducted by aliens. Haunting visions of otherworldly creatures mixed with flashbacks of unsettling medical procedures have both plagued, and ruined her life. The final episode is called Stolen Gravestone. This one is a little different as the main character is aware she is being haunted but is mostly okay with it. The ghost seems protective of her and she feels safe enough. Unfortunately that changes when she is due to get married. The once protective ghost becomes possessive, determined to ensure that she belongs to it, or no one.

So, 6 stories that are all true. Well, that is unlikely. In reality Netflix are taking a liberty by claiming them all to be true. On one hand, they may just be displaying 6 stories that are true in accordance to what the story teller believes happened. More likely, perhaps, is that they are claiming them to be true to create interest and intrigue. Much like the cleverly made film we reviewed called The Blackwell Ghost. Designed to appear true, as true stories are naturally more scary.

There are stories here you could believe. Or at least stories you could believe that the tellers believe. It is the second episode, The Slaughterhouse that makes you quickly realise this is too much. Just too unbelievable. A serial killer with untold victims, tokens from those victims in a house that has never been reported on or, even now this story is out there, never been of interest to law enforcement. A family that, even after escaping their father, never reported him. A grandchild that knowing all the horror, still wants to live in the house. It is just too much. Too far-fetched.

So, we know (I believe) these are just fiction and that is fine. I have no real issue with people pretending something to be true. The Blackwell Ghost did it, even Paranormal Activity did it as did pretty much every attempt at found footage out there. That alone isn’t a reason for me to like or dislike this show, and I do like it. Haunted is definitely top heavy in quality I think, with the first few being better stories, more disturbing and more interesting than the last few. It goes without saying that The Slaughterhouse is strong horror. It is a difficult watch, seeing the torment of these two young daughters at the hands of their sadistic father.

The ghost lady in The Woman in White looks great and the story has a creepy edge to it. The same can be said of Children of the Well. I think the main reason for that is the children involved. The Woman in White killed herself and her son and now torments another child. I have said enough about The Slaughterhouse already. Children of the Well is about three dead children trying to get a 4th to join them. Watching children be tormented is always an uncomfortable, and horrific watch. The alien invasion story does little for me. While the woman telling the story is believable, the re-enactments show big headed aliens and giant space ships making you think more of films like Independence Day rather than any horror.

I do like the way they are put across though. The people telling the stories are mostly believable and come across suitably emotional. I like the jumps back and forth in time from re-enactment to story telling. Everything looks great, as you would expect from a Netflix Original budget. There are a few little jump scares here and there but mostly you will experience very little fear. Discomfort at times and intrigue, yes, but not fear. The acting is solid enough. Short burst of film like this give most characters very little screen time as the re-enactments are obviously other actors in different life stages. There are a couple strong performances worth noting though. The man in the first story is particularly believable as is the lady telling the alien abduction story. The dad is creepy as hell in The Slaughterhouse and the daughter who stays acts it very well.

There are a couple that really suck though. An older lady with white/blond hair listens in on The Woman in White and rather than looking interested or serious, looks bored and sleepy. It really stands out, almost like she finds the story unbelievable, like the man is just an actor making something up. There is also a bloke, again in the Alien Infection episode. I think he is meant to be an expert on the subject but his constant shouting out facts about abductees gets irritating quick. Much like The Blackwell Ghost, to feign reality, the main characters are unlisted/uncredited so I can’t tell you who they all are.

All in all though, Haunted is a couple hours out of your life that is worth spending on some decent enough scary/creepy stories. Take them for what they are, a mockumentary or docudrama or whatever you want to call it. They are good little tales with okay acting and great visuals. There is some uncomfortable viewing and few little jump scares but mostly they are just interesting tales. At 25 minutes an episode, why wouldn’t you give it a go?