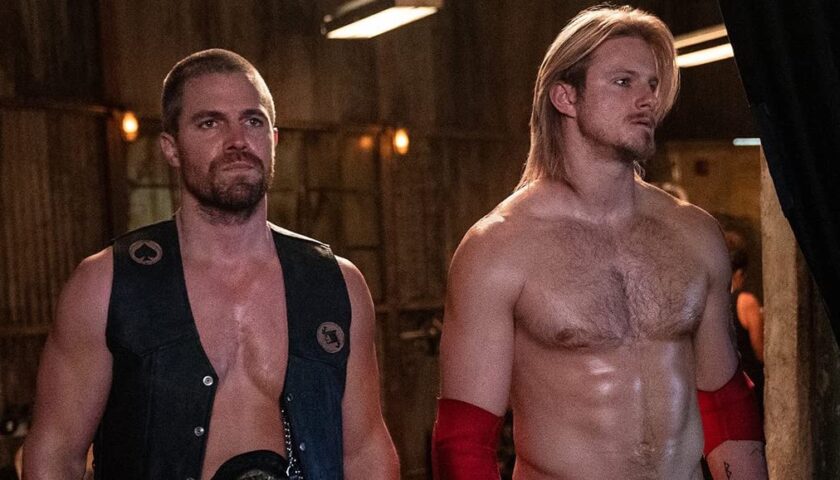 The contemporary television landscape is littered with examples of ambitious-to-a-fault dramas built on lofty concepts and complex structures, shows that often burn fast and hot in a pilot, only to leave uncertainty about where they can possibly go. Such is not the case with “Heels,” Starz’ family drama about a small-town wrestling league and the sibling rivalry at its wobbly foundation.

“Heels” is built for endurance, not for speed, and it wouldn’t come as a surprise if, in another two seasons, it starts popping up in “TV’s best drama” conversations. That said, the journey toward realizing that potential is slow and amorphous for the first full half of its debut season. For a show set in such a potentially explosive environment, “Heels” comes with an awfully long fuse on it.

For Jack, writing the DWL’s salacious scripts and managing moonlighting wrestlers was always in the plan. But younger brother Ace (a magnetic Alexander Ludwig) grew up destined for greater things outside their small town, so he’s understandably sullen about being stuck in Duffy and living with his mother. Ace’s only escape is in the ring, where Jack’s labored scripts position him as a hero (a “face,” in wrasslin’ parlance), while Jack acts as his villainous foil, better known as a “heel.”

“Heels” casts the shadow of a wrestling drama for wrestling superfans. But in the ambling pilot, creator Michael Waldron (“Loki”) spends an inordinate amount of time and dialogue schooling the audience on such concepts as “kayfabe,” the supercharged strain of suspension of disbelief that governs wrestlers and fans.

Elsewhere in the early episodes, “Heels” is narrowly focused on underpinning the central relationship between Jack and Ace, an understandable instinct given how their brotherhood lends itself to a knotty allegory about storytelling itself. How will Ace manage to find his real identity with Jack writing a public story for him without his input? Can Jack be trusted to write Ace fairly, or is he just adding turnbuckle slams to his own myths about their real-life family dynamic?

As interesting as those ideas are, they can only carry the story as far as the audience’s investment in them, so considerable effort to spent shading in the Spade brothers to the detriment of the far more intriguing ensemble. The tension between Jack and Ace feels overworked. And every scene spent watching Jack and his wife Staci (Alison Luff) fuss about strained finances feels like time that could have been better spent with second-stringers like Rooster (Allen Maldonado) and Crystal (Kelli Berglund) who face more immediate stakes.

Going all-in on Jack and Ace also muddles the tone. “Heels” begins at the one-year anniversary of Tom’s death, so the brothers are appropriately mournful and introspective. But their moments of quiet reflection are shuffled among absurd scenes of wrestling mayhem, which include incontinence-soiled tights and a stuffed squirrel spewing fake blood from atop a drone.

The tonal confusion is exacerbated by the score, an assortment of elegiac guitar strums that, along with the main title sequence, constitute a deliberate effort to be compared to “Friday Night Lights.” “Heels” already invites that comparison with its story about small-town athletes saddled with outsize pressure relative to what they do and where they do it. The obtrusive score is a jab right on the nose, too often evoking a superior show while “Heels” is finding its sea legs.

But like the greatest wrestlers, “Heels” springs back to life just when it seems down for the count. The back half of the eight-episode season finally clicks into gear, in large part due to the addition of showrunner Mike O’Malley, who recurs as the charismatic leader of a rival league in Jacksonville. O’Malley’s cleverly written character brings with him the high stakes missing early on, along with the tart wit O’Malley brought “Survivor’s Remorse,” his last series about a squabbling sports family.

That momentum powers “Heels” through a thrilling finale, which foregrounds the neglected ensemble characters and teases a radically new dynamic for a potential second season. Hopefully “Heels” will last that long. The show’s world demands to be expanded and repopulated as often as the professional wrestling leagues whose success Jack and Ace are trying to replicate. Which is to say: “Heels” ultimately succeeds as a freshman drama and could grow into something really special. Just expect some less-than-thrilling undercard bouts before the real action begins.