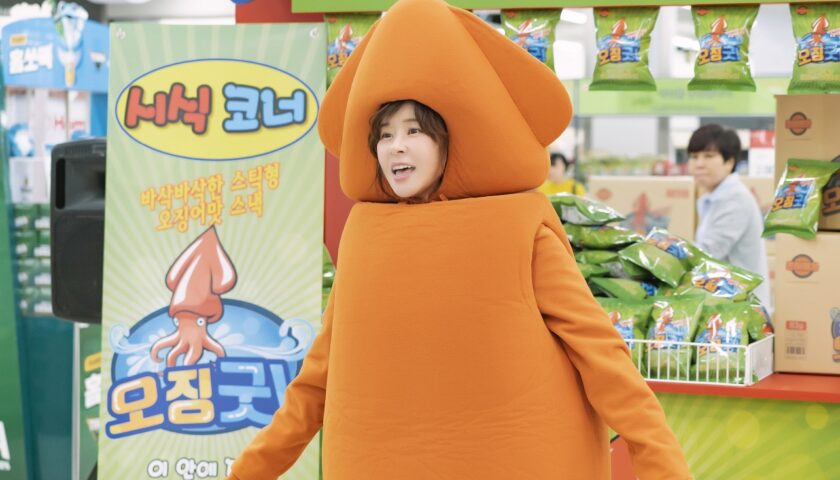 In a cafe, a woman writes in a notebook, asking if the person she’s writing to got back safely. Then she forgets that she didn’t say hello. “Hello, me!” she writes.

We then flash to a woman being wheeled into an emergency room. Ban Ha-ni (Choi Kang-hee), a 37-year-old woman, exits her body as she flatlines and begs the doctors not to save her, even starts getting upset when they shock her back to life.

We then flash back a few hours to see how she got into this distraught state. She works at a supermarket, in a bright red squid costume, singing about the virtues of a new crispy squid snack. A kids takes handfuls of samples, and his mother gets upset when Ha-ni grabs his wrists to stop him and then even more upset when the kid starts having an allergic reaction. But that’s why she feels so distraught. “If that was the case, one out of two people with jobs would be dead,” we hear her voice say.

While in her costume, she gets nabbed by local cops for an outstanding slander complaint, which she didn’t go to court to face. While in a holding cell, a man in a trench coat and nothing else gets hauled in. We see in flashback that Han Yoo-hyun (Kim Young-kwang) has run afoul of his wealthy dad, Han Ji-man (Yoon Joo-sang), who challenges his playboy son to earn a million won (about $920) in a week. When Yoo-hyun fails to do so, he kicks his son out of his house, with nothing but his underwear and that coat on him.

Ha-ni is being accused of slander by an actor named Ahn So-ni (Eum Moon-seok) aka “Anthony”. He was on a remote set, and a wayward latte caused him to have to poop in the woods, where Ha-ni was shooting flowers nearby. He accuses her of taking pictures of his squatting, and he destroys the camera that belonged to her late father. But he withdraws the complaint once she starts to mention what he was doing there.

Ha-ni and Yoo-hyun encounter each other again in a swank hotel restaurant. She goes on a date set up by her sister, which goes south in a hurry, and his brother-in-law’s credit card gets rejected, due to his father’s influence. She lends him money to pay for his dinner, and the two of them find each other again outside a convenience store. A phone call from her boss prompts her to call a taxi, drop her phone, and get hit by a truck.

We flash back 20 years. Seventeen-year-old Ha-ni (Lee Re) is much more confident and defiant, using a boy who likes her to ditch school to go to a talent show audition. When her parents drag her out of there, she leaves her dad’s taxi, and she too gets hit by a truck. But she ends up in the hospital… one bed over from her 37-year-old self.

Even in the world of K-dramas, the premise of Hello, Me! is a bit out there. We’ve seen episodes of series where a character visits or gets visited by his or her younger self, but never a whole series based on that.

We would have loved to see more interaction between current Ha-ni and the younger Ha-ni, but their first encounter comes at the very end of the first episode of Hello, Me! Before that, we get an hour of setup, for both Ha-ni the older, Ha-ni the younger and for Yoo-hyun, whom we imagine will become Ha-ni’s friend throughout this strange happenstance.

That’s far more exposition that we would have gotten if this were a Western series. In some K-dramas, taking the time to set up the story reaps benefits later on, but here it just seemed to drag out the hour. It felt like this was more an effort to insert jokes, like Ha-ni sitting in a holding cell in her squid suit, than to really advance the story.

We likely could have gotten to young Ha-ni’s story a little earlier, perhaps interspersed with what was going on with the older Ha-ni and her sad life. It would have made for a more immediate contrast between her daring younger self and her timid older self. Separating the stories made it feel like we were watching two different episodes, but at least we had a pretty good idea of just how pathetic the thirtysomething Ha-ni was.

Although, was it really that bad? Sure, she was struggling. And when you hit that stage in your life and you’re still struggling you start to wonder what it will all lead to. But we all go through messes like this in our thirties, where we wonder just how we got here in the first place. Our dreams from our younger days have been crushed under the expectation to feed and house ourselves, and Ha-ni is no different. It felt like she was more having a horrible day than a horrible life.

But we guess that’s what younger Ha-ni will do, which is survey her older self’s life and be horrified. We just wish we got some of that early on, rather than glean it from the Netflix episode descriptions.

The attempts at comedy on Hello, Me!, often punctuated by sound effects, aren’t overly funny. And the show has some awfully quick tonal shifts from “trying to be funny” to “trying to be dramatic.” But we expect nothing less of K-dramas.