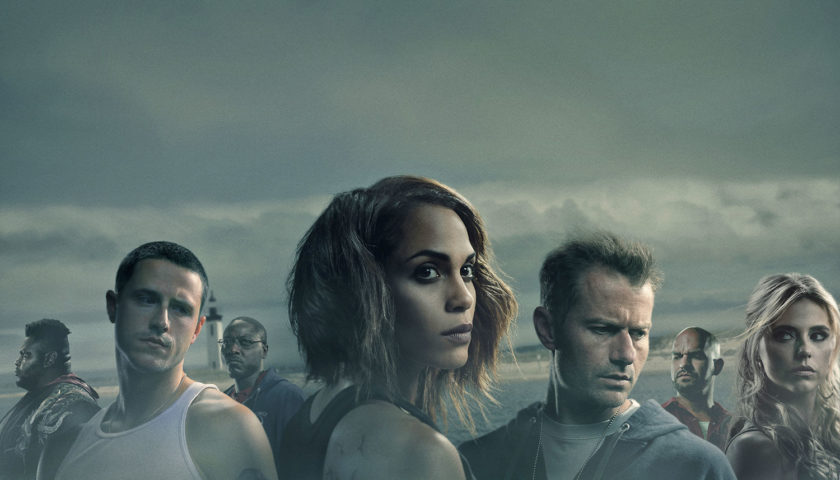 From its very first episode, Starz’s new crime drama Hightown poses the question of who its intended audience is. The generous answer would be “everyone.” Set in the gay hotspot of Provincetown, Massachusetts, on the tip of Cape Cod, during a crowded summer, the series is chock-full of racy lesbian sex and half-naked revelers in assless chaps, but also features more than its share of gratuitous stripteases to satisfy the male gaze. Its inclusive sensibility — which includes a couple of hilarious gags at the expense of penises from its queer Latina protagonist’s POV — screams premium cable, but its stock characters and profoundly square murder mystery are straight out of a CBS procedural. Anyone could enjoy a competently crafted, if not particularly memorable, show like Hightown, but I imagine few viewers would feel like it’s made for them.

Created by Rebecca Cutter (Gotham), the series boasts as its most notable achievement an ambitious portrayal of Provincetown’s townie culture. In the pilot, fisherman and recovering addict Junior (Shane Harper in a thoroughly convincing eastern Massachusetts accent) cheerfully regales a divey bar, with his father (Mike Pniewski) standing next to him, about the time he performed fellatio for a ride home. Only the bartender blanches at the anecdote, which is how Junior knows he’s a newcomer — a P-town local, no matter how uncouth, would have no reason to be homophobic. But the town’s working class hardly live in a utopia: Tourists have driven up housing prices, the opioid crisis is ravaging families, and Latinx residents openly wonder how many of their white, older and more conservative neighbors voted for Trump.

One liaison between Provincetown’s two biggest constituents is “fish cop” Jackie (Monica Raymund, Chicago Fire), who spends her days inspecting fishermen’s catch and her nights seducing vacationers while sloshed and high (not on pot). Hightown makes her every bit the hard-partying, compulsively womanizing antihero craving redemption, and the fact that she’s a queer Latina unfortunately doesn’t complicate her character very much. Jackie soon discovers the body of a murdered addict that washed ashore, and though her badge is revoked after a drunk-driving accident, she pursues an unofficial investigation on her own.

The state trooper who Jackie believes isn’t taking the case seriously enough is Ray (James Badge Dale), another iteration of the deeply flawed cop, this time in the traditional, craggy-faced straight white male package. Ray had an inappropriate personal connection to the dead addict — one he seems unable to stop himself from replicating with a stripper named Renee (Riley Voelkel), who happens to be the girlfriend of, and co-parent with, the imprisoned gang leader Frankie (Amaury Nolasco). Frankie instructs Renee to “get close” to Ray, and how Renee decides to negotiate her position between the two men becomes one of Hightown‘s few genuine surprises.

Jackie and Ray are destined to work together to solve the murder, but because he’s highfalutin state police and she’s a mere fisheries agent (fighting off a felony charge, no less, for her DUI), it takes a while for the two characters to team up. With all eight episodes nearly an hour long, every installment suffers from pacing issues. But the lulls in the investigations give the writers a chance to humanize the addicts and the dealers, particularly Frankie’s lieutenant, Osito (Atkins Estimond). The unexpected friendship that sparks between Osito and Junior makes those supporting characters the show’s least archetypal, especially as the career criminal imparts to his jumpy new recruit how to make peace with the violence they’re ordered to inflict.

Hightown doesn’t ever reach full beach-noir status, but it does grow organically darker and more heartbreaking as the season progresses. And unlike so many murder mysteries, it manages to make each of its deaths shocking in its obliteration of human potential. On most shows, the coincidences between the characters might be risible, but the writers persuasively establish this version of Provincetown as the kind of teeming village where secrets can fester even between lifelong friends. The plots wrap up tidily and satisfyingly, but my favorite scene ended up being the brief one when pole dancer Renee, made breakfast in bed for the first time in her life, giddily removes her front dentures to eat. Hightown is great at committing observations of lives lived to the small screen. Too bad the show doesn’t have more of them.