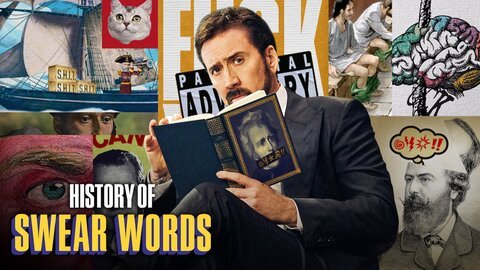 There’s really no public speaker more captivating than Nicolas Cage, either the maligned genius or inspired fool of the acting world, depending on who you ask. Part of it can be explained, what with his speech patterns so thrillingly unpredictable, emphases placed on syllables no one would have ever thought to punch like a drunken boxer. But part of it feels more mystical, owed to the shamanic magnetism making his straight-to-video action potboilers so strangely engrossing. He casts a spell with even the most mundane sentences, and can turn a four-letter outcry howled to the heavens into an obscene aria. If you’re going to make a miniseries about the complex phenomenon of curse words, both their dignified academic history and their forbidden juvenile lure, you be hard-pressed to find a better host than the Cage.

He brings more gravitas to the proceedings than this broad, slight project could have hoped for. His infrequent appearances, mostly kept to intros or outros with the occasional check-in for some gamely delivered narration from a plush living room set, perk up the six 20-minute installments that can otherwise read as inessential and uneven. These exegeses on the origins and evolving significance of English language’s naughtiest words can be amusing and they can be edifying, but only in fits and starts that come too sparsely for a run time this compact. Mostly, the attempts at comedy or academic rigor split an unkind distance – not quite as informative as an actual article, not quite as funny as an actual standup routine.

Each episode takes an all-angles look at an array of profanities, the lightly irreverent tone precluding the inclusion of racial slurs or other button-pushers. They’re more oriented around the simple and immediate pleasures of foulmouthery: cathartic lung-topping screams of “fuck”, utterances of “shit” through a devilish grin, dozens upon dozens of creative genital euphemisms. A baseline appreciation for the inherent humor of cussing will make the handful of minimally witty animated skits illustrating the various etymologies go down much easier. Lacking that, these interludes will scan more as rightly cut segments from Drunk History, not nearly as clever about the mixing of stiff-lipped antiquity with modern dirtiness. The average wit level tops out at schoolyard, typified by jokes that end with the teller’s mouth full of soap.

The laughs are best left to the professionals. The producers and Netflix’s talent department have rounded up a who’s who of the saltiest comics working today for commentary and personal perspectives. Such renowned pottymouths as Sarah Silverman and Nikki Glaser wax rhapsodical on the versatility and visceral thrill of a well-deployed C-word, while Joel Kim Booster and Patti Harrison pop in to familiarize squarer audiences with the gay and trans communities’ reappropriation of derogatory hate speech. (Watching Harrison try to maintain a diplomatic professionalism while explaining her distaste for the gender-essentialist liberalism of the pussy hat movement ranks among the series’ most delectable moments.) Those viewers somehow still unaware that many women and gay men have largely stripped “bitch” of its power by using it to refer to each other will be stunned, having taken the first step on a long overdue journey of enlightenment.

The open-endedness of the topics allows for plenty of tangents, where we find much of the best material. There’s time enough for some musings on the absurd and arbitrary rating system of the Motion Picture Association of America (with not one, but two explanations of what the Hays Code is), the powder-keg provocation of Fuck Tha Police and the unlikely congressional campaign of one Dick Swett. Character actor Isiah Whitlock Jr stops by for a tribute to the expletive he has made his own, culminating in his illustrious career’s longest “sheeeeeit!” ever. The general vibe of loose informality makes any overtures towards the scientific seem tedious and unnecessary, as in an overlong sequence dubiously “testing” the efficacy of swearing to diminish pain. Kicking back and talking some literal shit should be enough.

And yet this premise lacks the basic heft required to anchor a miniseries, instead leaving the impression of a collection of lengthy YouTube videos. Its existence appears to be motivated by little more than its potential to attract clicks, in keeping with Netflix’s reputation as a place where anything capable of holding a human attention span for longer than two minutes will get a green light. The saving grace dispelling the aura of disposability is Cage, the sheer magnitude of his screen presence lending the whole operation a higher credibility. He’s living proof that there’s a lyrical poetry to the unsubtle art of cursing, and that that primal magic isn’t so simply conjured. Repeated enough times, the many “fuck”s turn into noise.