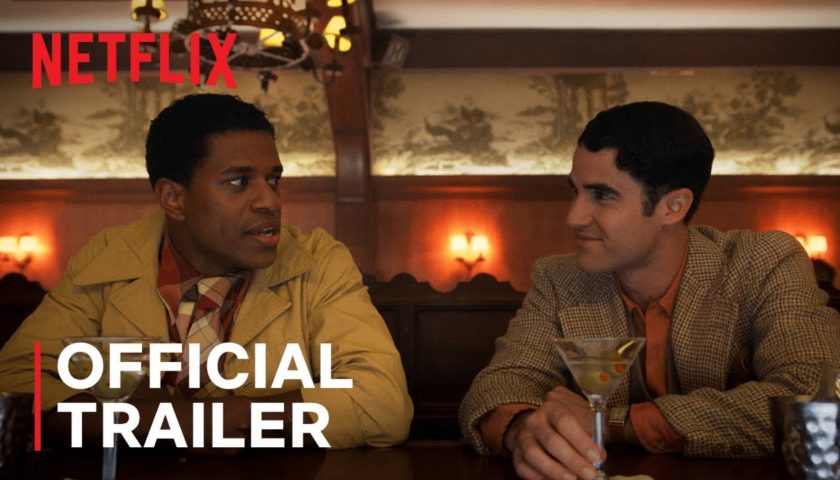 Netflix limited series premiering May 1, 2020 Greetings again from the darkness. “I want to go to Dreamland.” One might assume that phrase is related to Hollywood being the place where dreams can come true, but co-creators Ryan Murphy and Ian Brennan take us down a much different path. The two have collaborated on the TV series “Glee”, “Scream Queens”, and “The Politician”, and here they offer up a revisionist history on the post- WWII Golden Age of Hollywood, in the vein of what Quentin Tarantino did in INGLORIOUS BASTERDS and ONCE UPON A TIME … IN HOLLYWOOD. Mr. Murphy and Mr. Brennan seemingly focused on idealistically imagining a film industry where one’s race, ethnicity, or sexual preference made little difference. In doing so, they devote significant time to racism and homophobia.

While the series mixes fact and fiction in such a way that the lines are often blurred, there are two main storylines that provide the backbone of the series: the actual suicide of 24 year old actress Peg Entwistle, which occurred in 1932 when she jumped from atop the Hollywoodland sign; and the mostly fictional crossing paths of a handful of aspiring actors, writers and filmmakers as they navigate the treacherous film industry waters. We see the new generation clashing with the establishment – a tale as old as time.

The 7 episodes cover approximately 7 hours, but it was somewhat challenging to make it through the first three. However, I’m so glad I stuck with it. The series starts off with what seems like a concerted effort to push every boundary possible in regards to sex and racism, with an emphasis on the proliferation of homosexuality within the industry. The characters that are new to town are trying desperately to survive as cling to the dream of their big break.

The series elevates significantly in Episode 4 when the attention turns to filmmaking and acting and running a studio. There is a terrific sequence where we bounce back and forth between two pairs of actors rehearsing for their auditions. We feel the pressure that actors endure during the audition process, and note the fine line … almost an indiscernible line … between success and failure. In addition to the newcomers trying to secure roles, we follow a gay, black first time screenwriter and a half-Filipino first time director. As a bonus, Eleanor Roosevelt is portrayed as preaching the social importance of a studio breaking from the industry norm.

“What if you could re-write the story?” is the tagline, and it applies not only to the screenplay of “Peg” (the movie within the movie), but also to Murphy and Brennan as they show how the industry should be, well except for the illicit sex, marital affairs, and mob interventions. Hypocrisy and double-standards are part of the fabric of the movie industry, but what if that gay, black screenwriter didn’t have his work defined by those labels, or the half-Filipino director wasn’t selected because he could pass as white, or if the talented black actress wasn’t relegated to playing domestic help? Those are the core issues at play here, and each of the characters has hopes of changing things in Hollywood.

There is an underlying theme where most everyone here is acting – pretending to be something they aren’t. It begs the question, how much of yourself would you surrender for fame or money, or simply to avoid discrimination and hardship? There seems to a lust for fame, and a lust for just about everything except dignity. Three real life actors are noted for how they were marginalized as people and/or professionals based on either their race or sexual preference. The stories of Rock Hudson, Anna May Wong (Michelle Krusiec), and Hattie McDaniel offer up real life proof of the injustice that was prevalent during this era.

Movie history buffs will enjoy the name dropping, such as George Cukor’s party, and Noel Coward, Tallulah Bankhead, and Vivian Leigh. There is also fun to be had with industry terminology, but the purpose of the project has higher meaning. The dreams of those who arrive versus the power of those already there is on full display. The internal struggles and fallout that occurs when folks are trying to fit an image rather than stay true to themselves – that message is delivered. Dylan McDermott’s Ernie is meant to represent the reality of broken dreams that happen right down the street from where dreams come true.

Stylistically, the series is beautiful to look at. Even the opening credits have a surreal quality. The set/production design is top notch, from the studio lot to the sound stages to the small apartments decorated to the era … and the cars are spectacular. Black and White images are used sparingly, but effectively to stay true to his period in cinema, and the music/soundtrack is perfectly used and could be a top seller as a standalone. Watching the great Patti Lupone is reward enough, but seeing Dylan McDermott and Jim Parsons deliver their best ever work is really something to behold. The debate of Money versus Art versus Social Responsibility could fill many textbooks, and Murphy and Brennan succeed in getting us to think. For those that can fight through the first three episodes, the payoff is there (OK, the ending is a bit hokey), and as Hattie McDaniel tells us, “the most important thing is being in the room.”