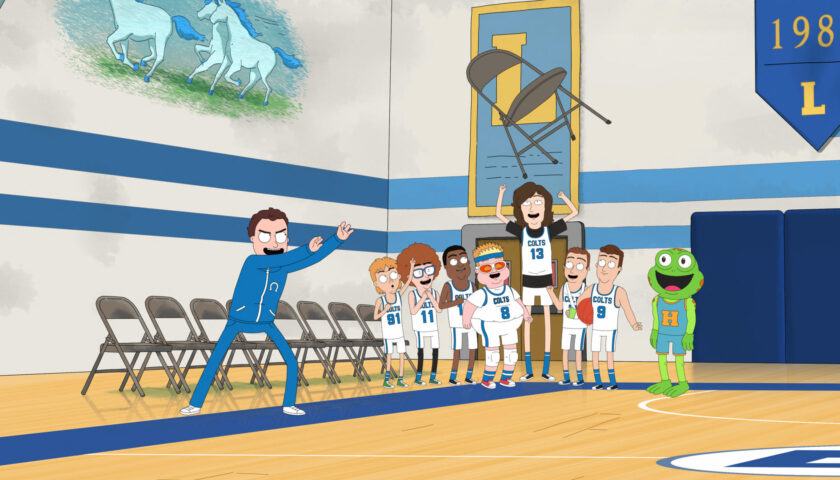 Hoops‘ Coach Hopkins is going to end his team’s practice with a effing basket if it’s the last effing thing he does, as seen in a first teaser for the new animated Netflix comedy (which will premiere Friday, Aug. 21).

Created by Ben Hoffman (The Late Late Show with James Corden) and counting Last Man on Earth‘s Phil Lord, Chris Miller and Seth Cohen among its executive producers, Hoops is an animated comedy sitcom that centers on a hot-headed, foul-mouthed high school basketball coach who thinks turning around his god-awful team will take him to the “big leagues” and turn his miserable life around.

New Girl alum Jake Johnson, who also serves as an EP, voices Ben Hopkins, the aforementioned pathetic, angry, foul-mouthed coach desperate to prove himself, but always looking for an easy way to get the job done. He’s shameless and selfish, and given the opportunity to do the right thing, he fails most of the time.

Jake Johnson will play the lead role in an animated comedy that has been ordered to series at Netflix, Variety has learned.

Titled “Hoops,” the series centers on a hot-headed, foul-mouthed high school basketball coach (Johnson) who thinks turning around his God-awful team will take him to the “big leagues.” Netflix has ordered 10 episodes of the half-hour series.

Johnson will also serve as an executive producer on the series in addition to voicing the main character. The actor is best known for his role as Nick Miller on the popular Fox comedy “New Girl,” which concluded earlier this year after seven seasons. Johnson has also recently lent his voice to the Netflix animated series “BoJack Horseman.” On the film side, he recently appeared in “Jurassic World” and “The Mummy.”

He is repped by UTA, 3 Arts Entertainment, and Jackoway Tyerman.

“Hoops” is created and executive produced by Ben Hoffman, who previously wrote for “The Late Late Show with James Corden,” “Archer,” and multiple Comedy Central roasts. He is repped by UTA and 3 Arts.

Phil Lord and Chris Miller will also executive produce via Lord Miller Productions along with Seth Cohen. Aubrey Lee will oversee the project for Lord Miller, which is also repped by UTA and Ziffren Brittenham. 20th Century Fox Television will produce the series, with Bento Box serving as the animation house.