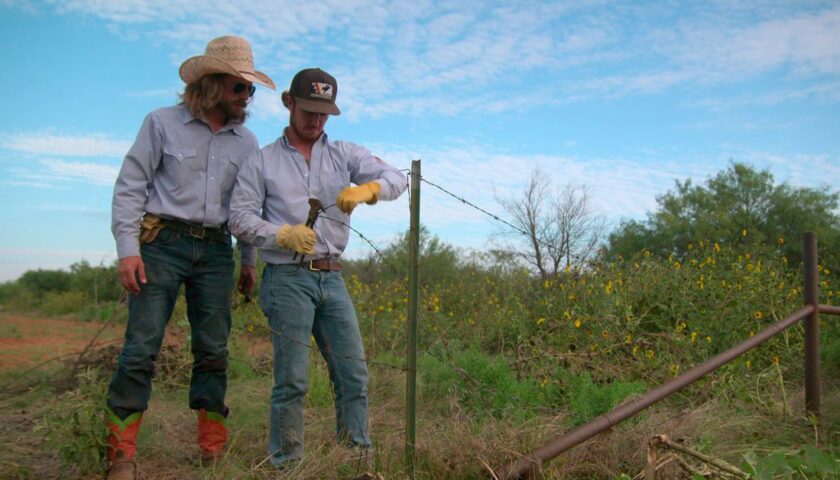 Dale Brisby, a champion rodeo competitor and owner of the Radiator Ranch in West Texas, is a proponent of the cowboy way. But he’s also aware of 21st century promotion. He had a popular YouTube series called Rodeo Time and has fostered a big social media presence. It’s to the point where, he claims, people from all over the world have written him requesting to do an internship at the ranch, in order to, you guessed it, learn how to be a cowboy. He and his ranch are featured on a new Netflix reality series.

Three cowboys on horses riding over a plain. “The cowboy. An iconic symbol of the American West,” says Dale Brisby. “We ride together, but in our hearts we are self-reliant and answer to no one.” Then Dale’s phone rings; his mom wants him to help “stick” some pictures to an e-mail.

The ranch does a lot of what you might think a ranch does, like raising cattle, but it also is a training ground for rodeo riders, so it has its share of bucking horses and bulls. Helping Dale is his brother Leroy, a champion roper named Cheech, and a former intern named Donnie. Their new intern, Jorden Halvorsen, is the first female intern they’ve had; she’s a professional bull rider from North Carolina who is on the comeback trail after knee surgery and wants to train on the bulls at the ranch, and is eager to learn ranching along the way.

Speaking of bulls, a young bull named Carl Wayne has escaped his pen; the ranchers have to drive out to where they think he is, then ride their horses to try and rope him. Just when they think they have him in the trailer, he busts back out and almost tramples Donnie in the process. They get him back on, but he’s too wild for them, so it’s off to the sell barn. Dale comes back with Donnie and Jorden to fix the fence.

At the auction — Cheech’s low estimate of what Carl Wayne will fetch wins out — they buy a bull for Jorden to practice on. Jorden names him Frostbite because, um, well a certain part of his anatomy is stark white. Frostbite makes a break for it as he’s being loaded in the trailer, and we see Dale and company chasing him through the parking lot. But once they get him back, Jorden takes her first ride on a bull since her surgery.

When we mean that the reality of How To Be A Cowboy isn’t real, we’re talking about scenes like the opener, where Dale gets called by his mother while he’s riding the plains. But Dale is all about the show, so his boasting and talking about the cowboy way and other antics that remind us of Joe Exotic with better-maintained hair. But he also knows that what he’s doing is pure schtick. And because he’s fine with it, we’re fine with it.

What surprised us about How To Be A Cowboy is that the schtick gets put aside when we see scenes of actual ranching, like the cattle drive the crew go on in the second episode. And the ranchers have some damn fine skills, even if there’s a dynamic that Dale is enthusiastic while Leroy isn’t, or that Cheech can get chatty with his texting. All of that is presented in a lighthearted way that makes the ranching aspect of the show very accessible.

It also helps that the producers take advantage of the amazing scenery in West Texas. There are many drone shots of Dale and company riding the open plains and we never got sick of them. The rodeo scenes, even the practices, are done well. Does it compel us to want to work at the Radiator Ranch? Probably not. But we wouldn’t mind visiting for a day.