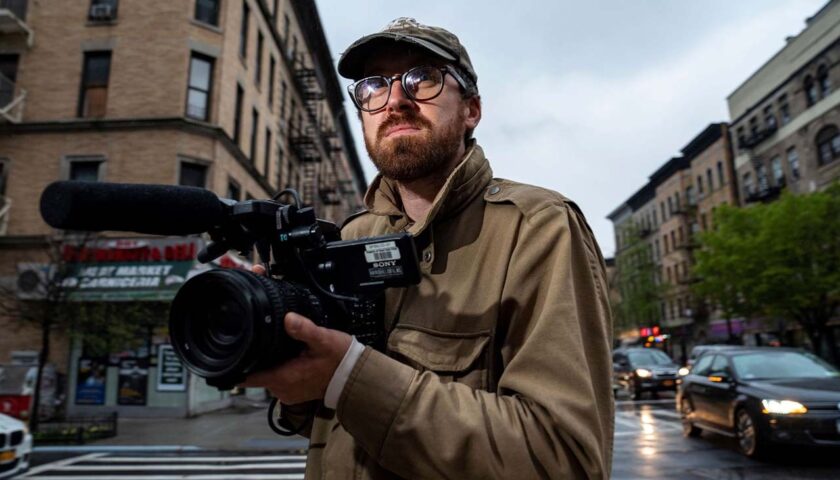 The oft-paraphrased Groucho Marx line about not wanting to belong to any club that would accept him as a member speaks to a familiar dichotomy about comedy: Yes, we all like to laugh in groups, as part of audiences, but there’s still something fundamentally lonely that runs through so many of the things each of us finds most hilarious. There’s also the inherent isolation of the stand-up spotlight, and comedy’s frequent focus on outsiders and oddballs.

The solitude of comedy was a theme that ran through Nathan Fielder’s beloved Comedy Central series Nathan For You — especially that show’s finale and peak, “Finding Frances” — and it’s the spine of HBO’s Fielder-produced new comedy-type-thing How To With John Wilson. Sure to appeal to many of the same viewers who made Nathan For You a cult favorite, How To with John Wilson is a thoroughly winning hodgepodge of elements — part quirky owner’s manual for a life strangely lived, part laconic travelogue, part loving snapshot of New York City on the eve of COVID-19.

Fielder is only a behind-the-camera force on How To With John Wilson, but then again so is series creator John Wilson, who spends most of the six-episode first season serving as director and cinematographer — plus co-writer with Alice Gregory and Nathan For You co-creator Michael Koman. He’s also the nerdy, likably uncomfortable narrator. When Wilson appears in How To, it’s usually in a reflection or in wonderfully awkward inserts from outside footage, like the MTV Spring Break concert he accidentally crashes, much to the chagrin of producers. The distance the camera allows Wilson to put between himself and his filming subjects is a source of laughter and at least some sadness.

The gimmick of How To With John Wilson is that he begins each episode with a small mission or goal — much less focused than the business-improvement strategies at the center of Nathan For You — related to basic navigation of life — specifically, life in New York. Episodic topics include how to make small talk, how to improve your memory and how to make the perfect risotto.

Sometimes there are actually specific how-to instructions contained within the episode. The risotto episode at least gives general directions on cooking, and an episode on how to cover your furniture spends time at a bespoke furniture-cover-fitting business, which I did not even know was a thing. The episode on scaffolding, however, would not in any way be valuable preparation for actually putting up scaffolding, nor does the episode on splitting a check really offer advice on after-dinner etiquette.

Wilson occasionally talks to experts in the relevant fields, or at least amateur enthusiasts. He sometimes researches. And I’m pretty sure there’s stuff here that he’s just making up so, I repeat again, don’t view this series as instructive enough to make you an expert on external building support architecture.

Instead, find solace and mirth in feigned profundities like Wilson’s observation: “We cover ourselves in scaffolding all the time. Braces are scaffolding of the mouth. A cast can be a scaffold for the limbs. A brassiere is scaffolding for the breast. These things give us structure and support and protection.”

The goal of How To With John Wilson is not expertise or even proficiency. It’s to illustrate a way of walking through the world with curiosity. His topics are fundamentally digressive, the questions that encourage him to leave his small apartment and to explore New York City or, occasionally, more exotic locations and bigger themes relating to humanity and human interaction. How does an interest in furniture covering, prompted by his barfing and destructive cat, relate to foreskin, and what does either say about our primal urge for self-protection and sheltering? Can a so-called “memory palace” help you keep track of information you’d otherwise forget, and how does our insecurity about these ephemeral and fleeting links to our past relate to the phenomenon known as the Mandela effect? These are only the starting points for Wilson’s free-associative journeys. How do these questions that begin as strange and not inherently interesting become universal?

How To ultimately occupies a strange space between the partially scripted oddness of Nathan For You and the wholly scripted experimentation of Andy Daly’s Review. That’s a good place to occupy.

Editors Adam Locke-Norton, yet another Nathan For You veteran, and Tessa Greenberg are in charge of stitching together a tapestry that connects Wilson’s big and small episode-unifying ideas with his observational filming of New York City and its residents. Wilson’s empathy for the simultaneous beauty and ugliness of the city is evident in every frame. In a constant state of montage, How To has the ability to make you snort with laughter, pause in contemplation and even swoon at the poetry of urban space. In many ways like HBO’s wonderful spring half-hour Betty, How To captures in cinematic amber the chaos, romance and bustling life of a city as March 2020 approaches.

The first season comes together in astonishing and unexpectedly beautiful fashion in the last of six episodes — a piece of narrative unification and compassion that I hadn’t previously thought I wanted, much less needed. The finale is a half-hour of television that turns How To With John Wilson from a drolly esoteric curiosity into a special document.