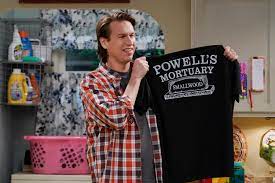 The slogan for the new CBS sitcom could well be, “Breaking Absolutely No New Ground Every Week!” and that’s just fine, as there’s still room these days for a pleasant, mildly amusing, occasionally touching 22-minute sitcom that’s pure comfort viewing, in the mode of “The King of Queens” and “Everybody Loves Raymond.”

We’ve got all the classic, multi-cam situation comedy ingredients here, starting with the likable Pete Holmes (HBO’s “Crashing”), who looks like a 6-foot-6 stuffed animal come to life, playing the low-key and non-confrontational but good-hearted Tom, a working-class Midwesterner who is laid off from his assembly-line job and ponders pursuing his dream of becoming a professional bowler. (“How We Roll” is based on the life of Saginaw, Michigan, laid-off-GM-worker-turned-bowler Tom Smallwood.) Holmes, a former Chicago comedian, is one of those actors we couldn’t possibly imagine playing a real jerkalito, and he’s squarely in his comfort zone as Tom, a loving husband and solid father. Who wants to bowl.

Katie Lowes adds a pleasant and warm presence as Tom’s wife, Jen, who works at a salon and dreams of opening her own place one day, and Mason Wells does fine work as their son, Sam, the obligatory semi-quirky and wisecracking kid who has his own dream: He wants to dance on Broadway. (This opens the door for Tom to tell his son not to be ashamed about the other kids bullying him and to shine his light, march to the beat of his different drum, all that good stuff.) We instantly believe this core group as a family.

The Tony Award-winning actress Julie White plays Tom’s mother, a widow who is constantly meddling in her son’s life and forever criticizing Jen (even though Jen is a darn good person, wife and mother), and the ever-reliable, Chicago-born Chi McBride lends his gravitas as Archie, Tom’s mentor and the owner of Archie’s Lanes — and hey, they built a pretty nice bowling alley set for this sitcom.

“How We Roll” follows the decades-old sitcom formula of staging scenes on three main sets: the Smallwoods’ cozy kitchen, the hair salon where Jen works, and the bowling alley. (When Tom goes on tour, they can change some signage and move around some props and ta da! Now we’re at a lane in Cuyahoga Falls, Ohio.)

In the pilot episode, Tom has been laid off from his job but has been given the opportunity to take a similarly soul-crushing but steady gig—and that’s when Jen tells him it’s now or never if he wants to go for it: “You’re not the only one in this family with a dream. Your son wants to dance on Broadway, you need to show him what’s possible. I want to open my own salon. … Why can’t we be the family who wins?”

Yeah! Go Jen! Go Tom! Why can’t the Smallwoods have their victories—and of course their setbacks, which will usually be resolved by the end of the 22-minute arc—every week. They deserve it.