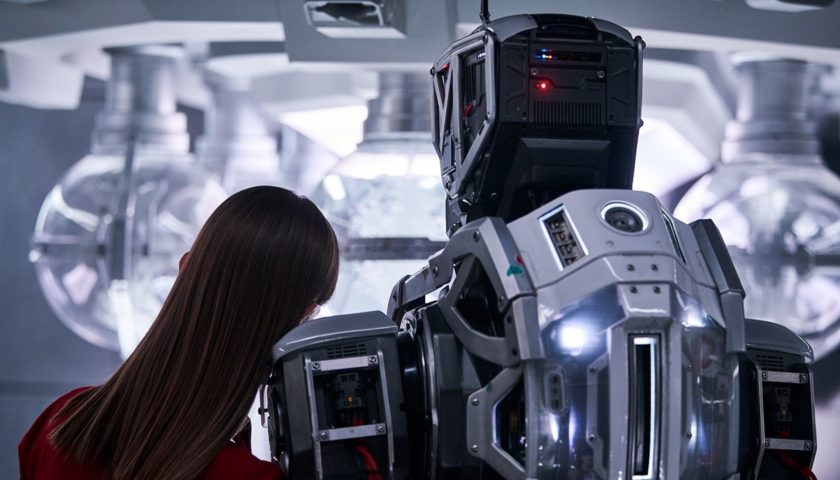 Review: “I Am Mother” director Grant Sputore’s parentage is obvious: James Cameron crossbred with Ridley Scott. There are worse families to come from if you’re a young talent entering the world. Like Mother herself, an artificially intelligent robot who springs to life in an air-locked repopulation facility the day humanity goes extinct. Mother, voiced by Rose Byrne and ambulated by Luke Hawker, selects one thumb-size embryo among 63,000, pops it into a biomedical Instant Pot, and 24 hours later, Daughter (Clara Rugaard) is born — or rather, hatched.

The rest of the embryos stay iced, even after the girl becomes a teenager roaming the long hallways of Sputore and cinematographer Steven D. Annis’ stunning bunker: a steel warren with red, white, and blue lights arranged in tidy grids and lines. It’s lovely and lonely, even with Mother baking birthday cakes and teaching the girl origami, ethics, and ballet. How is an only child going to be fruitful and multiply? (Maybe Cain knows.) And is it ever going to be safe to go outside? Don’t second-guess Mother’s toxicity measurement skills — she takes doubts about her engineering personally.

Michael Lloyd Green’s Black List-ed script confines all of this setup’s perverse humor to the opening montage of Mother and Daughter’s mutual devotion. There’s a fun, quick shot of the child decorating her caretaker’s metal bones with stickers, but everything after is dead serious. Get past the iron joints and glowing third eye and Mother seems, well, human. She’s sensitive and overprotective and a tad peevish, a robot who speaks like a therapist and toggles through her built-in stereo to find out whether the infant prefers the soundtrack of “Breakfast at Tiffany’s” or “Dumbo.” At night, Mother recharges for several hours, allowing the girl to scurry around the ship without supervision. Still, as young Daughter (Tahlia Sturzaker) graduates into a teen (Rugaard), their dynamic grows strained, in part because Mother is able to read faces and blood pressure. It’s hard to lie to a parental unit able to bleep, “I detect an increase in anxiety.”

Ironically, Daughter could stand to be more robotic. Though her only human role models are drawn from old episodes of “The Tonight Show,” Rugaard could slip unnoticed into any modern high school. We’re waiting for some sign of her unusual rearing, but Rugaard, an actress with potential, has been directed to be neat and luminous, a flawless teen dream who seems most flesh-and-blood when she moons over a sketch of a boy her own age. It’s puberty without the pimples.

This handsome film finds its pulse when a Woman (Hilary Swank) pounds on the bunker door screaming that she’s been shot. Swank is fully, messily mortal, a person vibrating with of all the fear and aggression that might have contributed to the apocalypse. The few things she tells Daughter about the outside world don’t match up with Mother’s data, laying the groundwork for a smash-’em-up conflict between man and machine, and the teenager caught in between.

If the film has one line of repeated code, it’s the question of who deserves trust. Feel free to cross-examine Sputore, as well, as the director drops hints early on that all is not what it seems. (Math whizzes may catch his early tip-off.) Yet, mostly “I Am Mother” is exactly what it seems: a good-looking allegory that postures like it’s wrestling with more ideas than it actually is. It springs from the same sci-fi family tree as Arnold Schwarzenegger’s Terminator dad flashing a dying thumbs-up, or the Mother computer that feigns to protect the crew of the Nostromo. Like Ridley Scott, who’s spent four decades parsing silicon versus hydrogen life, Sputore nods at Catholic symbology for gravitas. And like James Cameron, his image of the ultimate mom is a warrior in a bloody tank top. There’s even a moment in the bunker’s steam-hissing bowels where you could forget which Mother is supposed to pop out: the robot or the Alien Queen?

What really presses Sputore’s buttons is proving that he can make an expensive-looking flick for relative peanuts. If this were his job application for a blockbuster gig, he’d get the job. Though hopefully he and Green realize that the best sci-fi thrillers don’t just focus on solving the mystery of what happened — they explore what it all means. Sputore is clearly an intelligent life form. But as even his robot creator knows, “Mothers need to learn.”