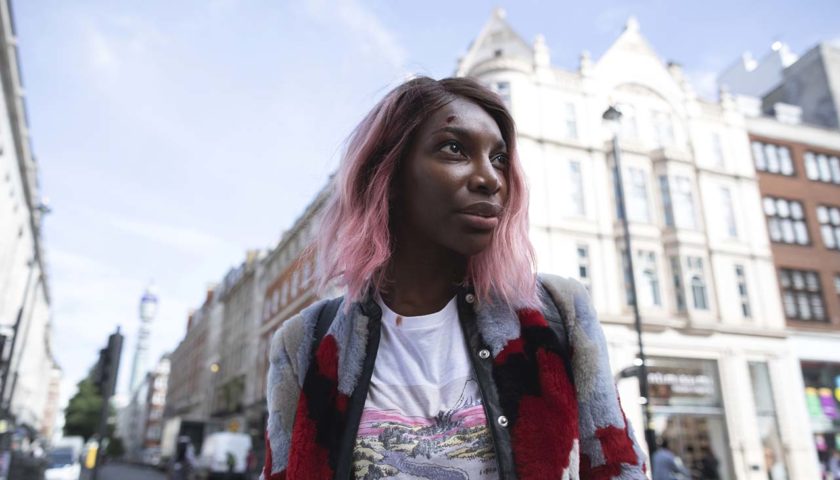 Michaela Coel’s HBO half-hour is a tonally complicated and confrontational series about consent and reinvention, very different from her Netflix comedy ‘Chewing Gum.

She may not have foreseen a global pandemic or international protests tied to police brutality, but Michaela Coel’s new HBO series I May Destroy You has a feeling of bracing, uncomfortable immediacy.

Coel’s second series as creator-star is marked by its filter-free treatment of sexuality, mockery of social media performativity and cross-sectional examination of a generation trying to find a voice. It’s angry and confused in intentional ways, messy and erratically focused in logical ways, and a guaranteed conversation-starter certain to generate equal measures of devotion and abrupt dismissal. Over the 12 half-hour episodes, there were many times I wasn’t enjoying the show and several points at which I lost track of narrative threads. But my interest never wavered in the audacious and precarious thing that Coel is attempting.

It’s hard to be exactly prepared for what I May Destroy You is trying to do. Or what it’s trying to be. Coel’s Chewing Gum, available to stream on Netflix, surely has some similar elements and you can recognize common authorial stamps. But Chewing Gum is identifiable as a certain kind of comedy, while I May Destroy You is very much not a comedy, except for when it’s very funny and even those moments usually punish you for laughing.

The first episode sets up the series as almost a London companion piece for HBO’s terrific Insecure. Coel plays Arabella, a writer whose first book, Chronicles of a Fed-Up Millennial, was spawned from her Twitter musings, leaving her stymied to figure out what her second book should be as deadlines approach. Her friends Terry (Weruche Opia), an aspiring actress too nervous to go to auditions, and Kwame (Paapa Essiedu), a fitness instructor addicted to a dating app and one-night stands, are in limbos of their own. Arabella’s most stable friend is Simon (Ami Ameen), in a long-term relationship and working as a banker, and he seems sketchy in his own ways.

Ducking her agents’ latest plea for a draft, Arabella goes out drinking with Simon and some people she doesn’t know. The next morning, she has gaps in her memory. What did she do? Where did she go? How did she get that cut above her eye? And what’s with the mental flashes, accompanied by ear-ringing, of a strange man looming above her in a bathroom stall?

Like I said, it’s not Insecure. And it’s not Chewing Gum. What the series actually is shifts a little with each episode. I’m not sure I May Destroy You is a show designed for weekly viewing, because it relies on that building uncertainty and refusal to stick to a genre, as Arabella progresses from niche literary favorite to faltering victim to social media celebrity to other things entirely.

For a while it feels like Coel and director Sam Miller — solo for the first three episodes and co-directing subsequent episodes with Coel — are approaching the seriesalmost as a rape mystery. Clues are littered through the first couple episodes in a way that resembles the new season of Homecoming or the mechanical ingenuity of Miller’s direction on Cinemax’s Rellik. Instead, what follows is an exploration of consent and how difficult it can sometimes be to see the dividing line between “good” sex and “bad” — as well as how easy that can sometimes be.

Over 12 episodes, the series puts Arabella, Terry and Kwame through waves of sex meant to leave you wondering, sometimes second-to-second, position-by-position, how antsy the characters should be, and how antsy we should be, highlighting the different ways consent is not only related to Yes/No issues and the way memory and perspective can turn the innocuous into something insidious. On every level, there’s a connection between consent and authority over one’s own body and a connection between that and authority over one’s voice.

And yes, there’s a lot to parse when it comes to the position-by-position sexuality of the series. Bodies, how they fit together and how they clash, are at the center of things. They are, for Coel, another way to make you uncomfortable or to make you wonder why one thing makes you uncomfortable and others don’t.

I don’t think I would have been interested in sticking with the show if it had exclusively been about working our way through a checklist of Arabella’s awful experiences on her forgotten night. But it’s fascinating watching Coel on a journey that has autobiographical elements and to recognize how clearly Arabella’s insecurities about her writing and the show’s insecurities about its storytelling focus — and the seeming inconsistencies in each — are intentional. Any neatness to this character or this narrative, which spreads over a year, would be dishonest, and among the myriad things Coel is going for, honesty is first and foremost.

Arabella doesn’t know what her story is and the season is about her finding that story. If some episodes follow plotlines that don’t make sense or aren’t fully developed, that’s valid, though it didn’t stop my interest from waning in a few episodes. But in a limited series like this — while HBO isn’t calling it that, there’s no reason for a second season — sticking a landing is essential and these 12 episodes resolve exceptionally well.

Coel also helps keep the series together as an actress. Her intensity as a performer is captivating and I like how she uses the intensity equally for drama, where it can can feel completely natural, and for moments of comedy, when its effect is unsettling. Without being quite Issa/Molly (from Insecure), the friendship between Arabella and Terry is a nice, sweet heart for the series, though Terry doesn’t always give Opia a clear arc to latch onto.

A fun thing to do as you’re watching the frequently un-fun things that happen in I May Destroy You: Try deciding, almost episode-by-episode, what the antecedents are to the pronouns in the title. Is it a story about revenge? Definitely there are aspects and beats that point in that direction. Are both pronouns referring to the same person? It’s definitely a series that’s about finding identity even at the cost of an old identity. Is the “I” referring to Coel and are viewers and their expectations part of the “You”? Perhaps. There’s a lot happening here, a lot of big swings. And even when it misses, the ambition of it is a thing to admire.