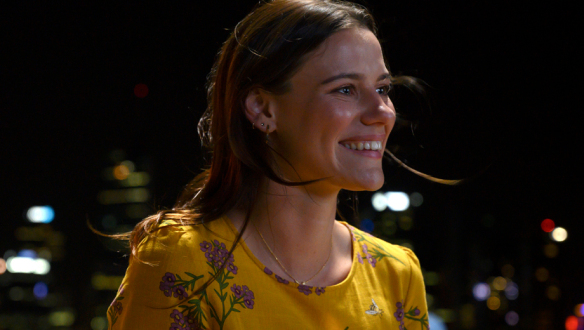 A story of hope, illness, resiliency, and love. I Met a Girl is an occasionally uncomfortable watch, but an uplifting one at the same time. Marketed as a romance, it’s not as light as you might expect it to be. Devon meets a girl and is in love, but he also suffers from schizophrenia with frequent bouts of delusion and paranoia.

The main focal point of the movie is the relationship between Devon (Brenton Thwaites) and his brother Nick (Joel Jackson). While it takes awhile for the audience to be connected to their relationship, it is an accurate depiction of the tolls mental illness can take on both the caregiver and the sufferer. At the beginning, I wanted Nick to be a little more caring than he appeared to be. But over time, that issue became clear. Nick does care, a lot, but he’s also been put in the exact same position, over and over again, and is exhausted. Devon doesn’t want to take his meds (understandably) but when he doesn’t, the consequences always fall on Nick. And in between the various stays at a mental hospital, Devon can’t always ascertain that Nick is doing the best that he can for him. It’s a struggle for both and the film clearly has empathy for both. Brenton Thwaites is remarkably good, capturing all the highs and lows of schizophrenia and Devon’s love for music.

Devon’s episodes of schizophrenia are jarring to the film. Flashes of colour, quick editing, screeching music, and discordant voices. It’s meant to be uncomfortable for the viewer because the film (overall at least) is an accurate representation of mental illness. Notice my earlier warning that this isn’t really the light romance it’s marketed as.

But now onto the romance. That poster caught my eye with its use of colour and representation of questioning if she’s real. After a schizophrenic episode and threat of suicide, Devon wakes up in Lucy’s throwback apartment (the style is very 60s) and they’re in love, it’s pretty much instantaneous. The cinematography of the following scenes is particularly effective – this is the light romance part of the movie and it’s shot and edited that way culminating in a fireworks display at night. The next morning, Lucy is gone.

The heart of the movie is Devon attempting to find Lucy, Nick attempting to find Devon, and the enduring question is Lucy real or just a figment of Devon’s imagination? This part of the movie does stretch on awhile, verging on too long, but then again Devon’s attempts to find Lucy begin with his idea to walk the 4,000 miles across Southern Australia from Perth to Sydney. Devon’s innocence and optimism are very cute.

The mystery element to Lucy and its eventual resolution is a good. In particular, I have a soft spot for the people Devon met on his way to Sydney. Some people looked at this person suffering from a mental illness with fear, others leant a helping hand, and my heart breaks. Empathy and just a little bit of kindness or respect can go a long way, and that’s how I Met a Girl won me over.