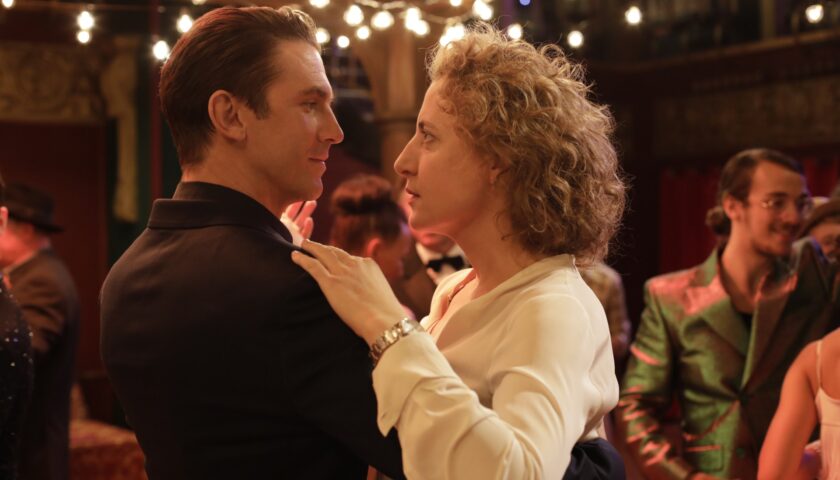 Where Ira Levin’s “The Stepford Wives” ends is where a truly fascinating domestic drama should begin. Have you never wondered if the misogynistic menfolk of Stepford, Conn., having finally realized their collective dream of flawless, submissive android wives with cleavage and housekeeping skills to die for, ever tire of the dull perfection they’ve designed? Life lived without friction and unpredictability isn’t much of a life at all; surely it’s only a matter of time before restless human desire sabotages the idyll. German filmmaker Maria Schrader has, one suspects, given the matter some thought, though her cool, grown-up romantic fantasy “I’m Your Man” twists the scenario’s gender politics and significantly changes the stakes — presenting an independent, idiosyncratic female protagonist with a robot man so perfectly tailored to her needs that she just can’t stand it.

The appealingly peculiar result lands somewhere between “Ex Machina” and “Toni Erdmann” on the tonal spectrum, if you can imagine such a hybrid — yet also riffs playfully on a wealth of hoary romantic comedy tropes, including the uptight career woman with no room for a love life, and the strictly-for-practical-reasons fake relationship that blooms into something complicated. Squint slightly at the screen and you can just about envision Sandra Bullock in an Americanized version of this material, if not for a script that repeatedly wraps formula in philosophy, defamiliarizing matters in the process. At any rate, Schrader’s beguiling Berlinale competition entry could cultivate a substantial audience of its own in international art houses — abetted by the rising profile of its helmer (fresh from her Emmy win for Netflix’s “Unorthodox”) and the canny casting of British heartthrob Dan Stevens as a boyfriend entirely too good to be human.

Something seems off about Tom (Stevens) the second 40-something academic Alma (Maren Eggert) is introduced to him at what appears to be an elite Berlin singles bar, and it’s not just the eerie persistence of his blue-eyed gaze. He quotes specific Rilke verses on command without pausing for thought, he gives compliments that appear written by committee (“Your eyes are like two mountain lakes I could sink into”), and he rumbas with mechanical fluidity, at least until his neck gets trapped in one repeated, glitchy spasm. Give or take some faulty wiring, Tom is an immaculate humanoid robot built for human companionship, one of many manufactured in an icy-white lab — not a bar at all — overseen by Sandra Hüller’s dead-eyed functionary. Custom-made for Alma after exhaustive surveying of her preferences, he’s ready to be taken home for a three-week trial period; the lab intends him to be her partner for life.

Alma, meanwhile, has other ideas: She’s reluctantly agreed to this experiment only to fund her research into the poetics of ancient administrative texts, and has little interest in sharing her life with an A.I. creation, however handsomely presented. The unflappable-by-design Tom registers a flicker of puzzlement when she shows him to a separate bedroom; his attempts to ingratiate himself by cleaning her apartment, rustling up a luxury brunch and running her a candlelit bath are met with exasperated scowls. “93% of German women dream of this,” he pleads. “Guess which percentile I’m in?” comes the pithy reply.

Yet what begins as a familiar odd-couple dynamic grows more nuanced and porous as time passes and, as promised, Tom’s algorithm adapts to Alma’s changeable moods and wants. In turn, his smiling, servile veneer cracks, making him more emotionally expressive, assertive and, well, human. It’s not long before she finds herself thawing to a lover who gives every appearance of understanding her better than she’s ever been understood by a man — but does it count if this extraordinary emotional intelligence is artificial, an automatic response to her own psychology? Tom grows more lovably individual and responsive by the day, but isn’t he just molding himself to her needs? What feels like love, Alma worries, is more akin to a performance in which she’s both actor and audience — though, as she watches her elderly single father (Wolfgang Hübsch) slip into isolated dementia, the merits of any companionship at all are quietly underlined.

Taking inspiration from a short story by German writer Emma Braslavsky, Schrader and co-writer Jan Schomburg serve up a rich panoply of questions, answers and stray ideas. Rarely are these assembled into neat combinations, even if the script veers too far into thematic explication in the final third. There’s no clear moral or practical solution to Alma’s quandary; viewers with differing personalities and relationship histories may well reach very different conclusions, while the film’s own sweetly melancholic resolution is far from clear-cut. Schrader’s filmmaking, more fluent and less mannered than in her last feature “Stefan Zweig: Farewell to Europe,” keeps proceedings supple but not soft, colored by Tobias Wagner’s wistful, jazz-laced score and the overcast pastels of Benedict Neuenfels’ lensing, which finds a guarded romanticism in Berlin’s severe streetscapes. (The city’s wonderful Pergamon Museum, meanwhile, gets the moody after-hours treatment it has long deserved on screen.)

Finally, much depends on the actors to keep this high-concept piece from collapsing into silliness or navel-gazing, and Eggert’s flinty firmness and Stevens’ buttery elegance prove ideally mismatched from the off — their performances gradually compromise and meet in the middle, borrowing a little of each other’s suaveness and steel along the way. Speaking German throughout with a crisply anglicized accent — another unconscious preference of Alma’s, it turns out — Stevens is a wry revelation, progressing from rigid, unworldly physical comedy to near-living, breathing emotional turmoil, programmed or otherwise. He makes Tom easy to fall for, whatever exactly he is, and if his soul is a mere illusion, Schrader’s curious charmer keeps an open mind: Who hasn’t at some point loved what they saw in a person, more than the person themselves?