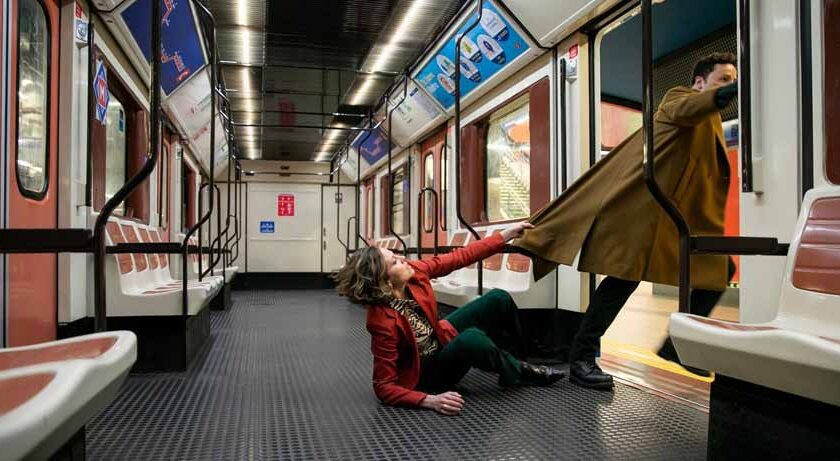 Unless you live under a rock or absolutely hate the sci-fi, action sub-genre, you must have come across at least one of the Mission: Impossible (1996-ongoing) movies. If you haven’t, you must have watched movies and shows that have mimicked some of its most famous tropes e.g. high tension heists, unrealistic gadgets, and of course, masks that can turn one into a totally different person. Apart from that the sub-genre has seen the rise of female-led action fares (Kate, Gunpowder Milkshake, The Protégé, and Jolt, all of which were released in 2021). And while most of them have been restricted to one-off adventures, the only character who has enthralled us over the course of a decade is Black Widow (Scarlett Johansson). Now, if you take these two intellectual properties (IP), mash them together, and then inject them with steroids, you’ll get In From the Cold (Season 1) (2022).

Created and executive produced by Adam Glass, the Netflix series follows Jenny (Margarita Levieva) who’s apparently just a helicopter mom to Becca (Lydia Fleming) assisting her to her ice skating competition in Madrid. But she is confronted by CIA agent Chauncey (Cillian O’Sullivan) and pushed to unearth her long-buried past as a Russian spy. Why? To investigate a series of murders happening all over Madrid where people are suddenly going into a fit of rage and killing others. And the CIA suspects that those people are being manipulated by a technique that was predominantly used during her spying days. Jenny refuses at first because she doesn’t want to ruin her present by delving into her past. However, when Chauncey low-key threatens Jenny by saying that he will ruin Becca’s entire worldview, she is forced to do his bidding.

Without spoiling In From the Cold too much, everything from the technique that is used to manipulate the masses into killing innocent people to Jenny’s special abilities is totally unrealistic. Glass and his team know that. So, they don’t try to intellectualize everything around it. They present those elements with a straight face and just run with it. Hence, sometimes the show comes off as schlocky and very blatantly corny. But it’s probably because of that tone that makes the body horror (which is a surprising new twist on Mission: Impossible’s mask gags), the spy work, and the politics digestible.

The show jumps from commenting on female spies (and the costumes that are made for them) being the product of male fantasies to romancing as they do in Spanish telenovelas (it’s set in Madrid, so it kind of makes sense) to then talking about the pitfalls of right-wing politics. In any other IP, this would’ve given you whiplash. However, it just works here.

Glass and his team do use two things to ground In From the Cold. One is the mother-daughter bond between Jenna and Becca, and the other is the action. Jenna and Becca’s relationship is practically the heart of the show. We’ve seen a lot of movies and shows that try to up the ante by saying that the whole world is in danger. But that just doesn’t hit as hard anymore. And it’s clear that the show-runners understand that too. So, they keep the world-ending stakes in the background (because a spy show won’t be a spy show without that) and prioritize Jenna and Becca’s personal arcs.

Through the dialogue and the visual storytelling, you’re reminded that Jenna, and therefore Chauncey and their guy-in-the-chair Chris (Charles Brice), are constantly concerned about Becca’s well-being. Yes, Becca’s journey takes some incredibly cliched twists and turns. However, by the end, you get to see the culmination of Jenna’s struggle to ensure that she doesn’t emulate the toxic mother-daughter dynamic she had with her mentor.

Coming to the action, the budgetary limitations are noticeable and you can see where they had to pull back in terms of camera set-ups, choreography, and the length of each fight. But still, every single action set piece is worthy of applause as they play to the characters’ strengths. Which is something more important than crafting flashy sequences that eventually end up being devoid of tension, weight, or emotion.

Thankfully, since In From the Cold (Season 1) puts emotion first, no matter where the action takes place (a makeshift building, a graveyard, a hammam, or an ice skating rink), they feel impactful. A lot of that credit goes to the stunt team, the make-up team, the art design team, the sound design team, the special effects team, the visual effects team, production designer Bárbara Pérez-Solero, cinematographers Hermes Marco and Imanol Nabea, editors Amber Bansak, Shawn Paper, and Kyle Traynor, and the directors. But the way the actors, and especially Margarita Levieva who does a lot of the heavy-lifting, sell those scenes is simply mind-blowing.

So, while you can lob a lot of criticisms at In From the Cold’s writing, direction, editing, cinematography, or the entirety of the show’s concept, the acting department is virtually critic-proof. Levieva doesn’t just ace it in the action department. She really commits to the act and shows the physical and mental toll that the mission is taking on Jenna. Cillian O’Sullivan plays it very straight and borderline stoic. Therefore, the moments where he breaks out of that mould are when you get to empathize with his investment in this whole endeavor; which adds to the stakes of the show. Charles Brice is so good. As mentioned before, he’s the guy-in-the-chair character, and like a lot of guys-in-chairs, he could’ve been turned into an annoying comic relief. But his humor is dry, his fear is palpable, and his feeling of responsibility towards Jenna, Chauncey, and even Becca is conveyed by Brice brilliantly. Lydia Fleming is great on her own and even better when she’s playing off of Levieva. And to avoid going into spoiler territory, let’s just say everyone from Alyona Khmelnitskaya, Stasya Miloslavskaya, José Luis García Pérez, to Anastasia Martin, Jeremy Ang Jones are amazing.

All in all, In From the Cold (Season 1) is quite enjoyable if you know the kind of cheesiness you’re getting into. Because that’ll allow you to relish the shocking incorporation of body horror into the spy-action sub-genre and the potpourri of emotions and action swirling around it. And stomach the fact that that’s a White woman occasionally portraying various ethnicities. There’s certainly a valid reason for that. But since we know Cloud Atlas (2012) did something similar and is frowned upon, it’s possible that In From the Cold won’t pass the ethnic sensitivity test as well. But apart from that, yes, Adam Glass’s show is intriguing, thrilling, and most importantly, unafraid to swing for the fences. I do recommend giving it a try.