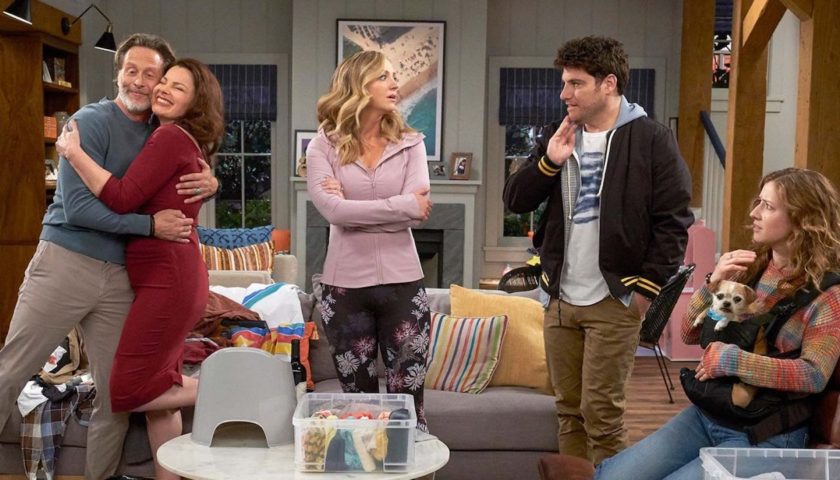 It isn’t fair to NBC’s new comedy Indebted to compare it with the departed comedy The Good Place just because they’re half-hours airing on Thursdays, but it’s hard to ignore a very clear distinction (other than just “good” versus “bad”): The Good Place took one of the most complicated sitcom premises in recent memory and somehow executed it with smooth ease, while Indebted takes one of the hoariest sitcom premises imaginable and struggles to execute it with even a modicum of consistency or confidence. The Good Place made the difficult look easy. Indebted makes the familiar — good comedy is never actually easy — look difficult.

Hailing from Dan Levy — not the Schitt’s Creek guy — Indebted bumbles around finding uncommitted shadings to the most basic of narratives: Young-ish couple (Adam Pally and Abby Elliott) has to deal with the perpetual presence of his clingy parents (Steven Weber and Fran Drescher). Easy, right? It’s Everybody Loves Raymond and countless lesser sitcoms.

Indebted inexplicably tries getting “fancy,” or at least nonsensical. To begin with, the pilot begins with Dave and Rebecca expressing enthusiasm that they’re finally getting their lives and their closets back, a ludicrous contention for parents with two kids under the age of 10 (though they may actually be done with their children, since the kids barely appear in the three, apparently non-sequential, episodes sent to critics). Then Dave’s parents show up with needlessly complicated stories about how they went into debt because they love vacations and were left without health insurance and had some medical issues, which actually could be a very generationally specific and perceptive element of a show.

There’s indeed a hypothetically interesting show here and it actually cheats some familiar sitcom expectations about failure-to-launch Millennials and their Boomer parents, and contributes to the discourse about cost of health care in America and about differences in parenting between generations. Except that most of those elements aren’t mentioned at all in the next two episodes. I can’t say for sure if the parents are now living with Dave and Rebecca or if they’re just nearby, and it really shouldn’t matter because none of this needs to be convoluted; it’s just bad table-setting. I’m also not sure what any of the characters do for a living or much of anything other than that they’re very superficially Jewish, which I respect if nothing else.

There’s also a sister played by Jessy Hodges. She’s a lesbian and other than being a pile of lesbian cliches from a ’90s comedy, I don’t think she has any characterizations at all. Oh, and Dave has a best buddy who pops up in two episodes, but NBC doesn’t feature him in any of the show’s official photos, nor is he listed in the main cast list, so I’m guessing he’s just another piece of the show that nobody was able to figure out.

The second episode of Indebted scraps nearly everything about the premise and just accepts that the parents are nearby, but they suddenly talk completely differently. The mom’s not-so-borderline racism in the pilot was probably a fairly smart thing to have done away with, but why didn’t NBC just suggest they reshoot the pilot in that case? Why make audiences eat the undercooked first batch of pilot pancakes? Then again, the third episode sent to critics is basically a third different show with a third set of character voices, and the only one with any real episodic structure — enough that it looked good by comparison. Of course, every punchline in that third episode relates to characters referring to gossip — they learn valuable lessons about talking about people behind their backs — as “Hot Gos,” which goes from annoying to fleetingly funny, back to annoying, then to resignation-inducing after the 15th variation.

Any temptation to watch Indebted would stem completely from what is still and indisputably a terrific cast, but all four stars have been used better many times in the past, with the possible exception of Elliott, who continues a career of potential without proper utilization. She and Pally seem conspicuously uncomfortable with the multicam form, as he in particular attempts to push one flimsy punchline after another to the back row of a studio audience that is bizarrely pleased with every punchline.

This sets up an unflattering comparison with Weber and Drescher, who can do this in their sleep. Drescher is sticking to her tried-and-true persona — more generous than calling it “schtick” — and if you think you can imagine the Nanny referring to “the Tweeter” or “AirBLT” or misquoting Nelson Mandela, then you can probably skip Indebted entirely, because it doesn’t get any better than that.

It’s Weber who generated my only “Awww!” moment in the first three episodes, as well as my only real laugh, and I couldn’t tell you a single personality trait exhibited by his character. The actor, who somehow has never been nominated for an Emmy despite having one of TV’s most varied careers, is just that solid.

It’s the wasting of this cast that’s ultimately most disappointing about Indebted, rather than its lack of amusement or perspective. These performers are too good for a show that’s so instantly and inevitably forgotten.