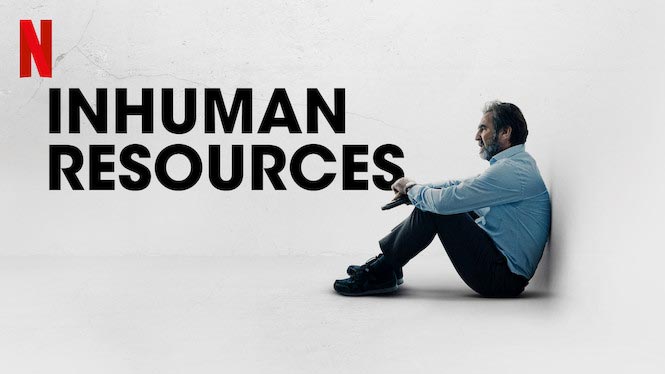 Inhuman Resources is a new Netflix mini-series from France. The series has just six episodes that each have a runtime around 45-50 minutes. The genre is Thriller, but it’s riddled with social realism drama in all the right ways.

The Netflix series stars Eric Cantona as a pretty unlikeable character. He’s desperate but also lies to his wife constantly to keep up appearances. In doing so, he is risking everything they’re both fighting for. His reasoning is both to spare his wife and to maintain some notion that he can still provide. Even when it’s obvious that he really can’t right now.

While the events of this mini-series might seem crazy, they are based on real-life events to an extent you probably would never imagine. Continue reading our Inhuman Resources review below for more on the real-life events that inspired this.

The absolute star of Inhuman Resources is, of course, Eric Cantona who plays the character of Alain Delambre.

Throughout this Netflix mini-series, he has two different looks – one makes him almost unrecognizable. Also, you know that it’ll end horribly for Alain Delambre even if you haven’t read the book it’s based on. After all, Eric Cantona is sitting in a prison cell, looking like a stereotypical tough inmate, telling this story through flashbacks!

Eric Cantona rose to fame as a soccer superstar in the iconic club Manchester United. Since then, he has managed to make an excellent move to acting. He even won an award for acting at Nashville Film Festival in the Graveyard Shift competition. It was for You and the Night (2013) by Yann Gonzalez, who also directed the intriguing horror-mystery Knife+Heart (2018).

In Inhuman Resources, he is really carrying the story on his back and if you’ve known Eric Cantona mostly as a soccer player, you won’t think of him as such after watching this mini-series on Netflix.

More familiar faces in the mini-series

Along with Eric Cantona, you’ll see the always brilliant Suzanne Clément as his wife, Nicole Delambre. Suzanne Clément also co-stars in the Netflix series Vampires which you might want to check out if you like vampire stories.

Also in the Netflix series is Adama Niane, who should be familiar if you’ve checked out the Netflix movie Get In. We were not fans of that movie, so it’s good to see Adama Niane in something else so quickly. In this mini-series, he plays a rather unsavory character. You’ll only see a glimpse of him in episode one, but you just know he’ll play a key role.

Obviously, there are many other interesting characters and some stellar performances by actors throughout the Inhuman Resources series. Just check it out and see for yourself. The story is very much based on its characters and the story is good, which says all you need to know about the characters.

Netflix series Inhuman Resources based on a true story

The plot of Inhuman Resources might sound absolutely crazy, but it is actually based on a true story. We’ve seen it time and time again; Reality always manages to surpass fiction. At least in terms of how people react. When it comes to zombies and other supernatural beings, fiction still wins. So far, anyway!

In terms of the Inhuman Resources inspiration, it comes from desperate people. The actual series is based on a book by Pierre Lemaitre, however, he was inspired to write this story based on some real events.

Philippe Santini, the managing director of advertising for France Télévisions, wanted to test how people, he worked with, handled stress. He managed to get them all together under the pretense of a seminar. During the seminar, nine hooded people dressed in fatigues, and armed to the teeth, stormed the room and took everyone hostage.

Obviously, Philippe Santini knew it was all “just” an exercise, but to everyone else, it was completely real. This happened back on October 25, 2005. The people were held hostage (hooded and handcuffed) for 1 hour and 15 minutes. Not too much noise was made immediately afterward, but then the victims of this “test” started showing symptoms of PTSD.

Still, those who went through the ordeal are the ones punished, since they are told they can simply leave if they have an issue. It isn’t until 2009, when one of the victims press charges, that Philippe Santini is convicted of any wrong-doings. In 2010, Pierre Lemaitre’s book is released just at Philippe Santini loses his appeal.

Many other similar cases exist from big companies all over the world. Often in relation to job applications or interviews, which only makes the plot of Inhuman Resources even more relevant and realistic.

Inhuman Resources is a mini-series consisting of six episodes. All episodes are directed by Ziad Doueiri. This is the second time Ziad Doueiri has directed a series since he also worked on 12 episodes of the thriller-drama Baron Noir (2016-).

The screenplay for this Netflix mini-series (which premiered in France on Arte) is written by Pierre Lemaitre (who also wrote the book) and Perrine Margaine. Personally, I am really hoping for an adaption of the Pierre Lemaitre books featuring the character of Camille Verhoeven. Especially the book “Alex” which should make for an amazing movie!

To me, Inhuman Resources is exactly the kind of series you almost cannot help but binge-watch. With just six episodes, it’s just easy to finish watching. Check out the entire mini-series on Netflix now!