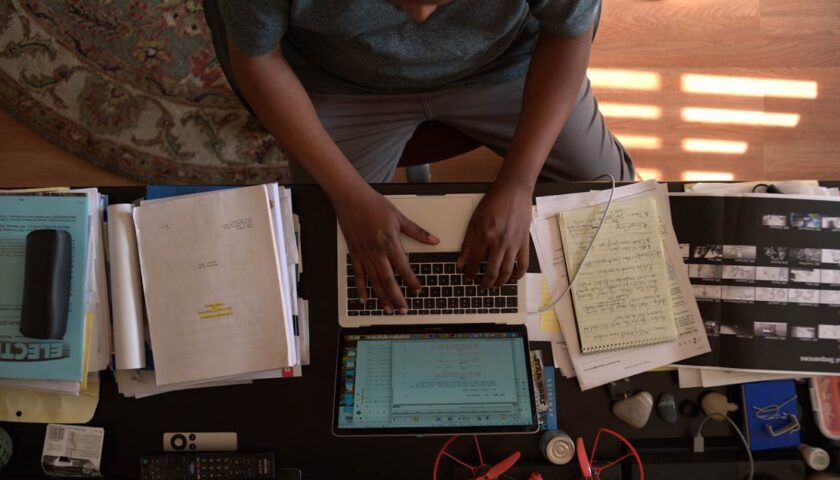 We see a man with his head down, writing on his laptop. “Being a professional writer means you have to write, even when you don’t want to,” we hear the man say.

The two episodes Disney made available are in the “Inspired” category. The first is Kemp Powers, a playwright and screenwriter who is currently the co-director and co-writer of Pixar’s upcoming film Soul. He talks about the importance of making sure the main character in the film, who is Black, can be relatable to everyone while maintaining his Black identity. When he fired off an idea to the director of the film, Pete Docter, to have the main character go to a barbershop — a social center of Black male culture — Docter thought it was worth a try, despite some reluctance by others working on the movie. It worked so well, that Powers was able to put more cultural touchstones in the screenplay.

In the second episode, we’re introduced to Deanna Marsigliese, a character art director at the studio. She’s in charge of teams that design characters for the various projects Pixar is producing. She’s an artist at heart: She not only dresses in vintage clothes but sports an entire ’60s look, complete with bright red hair and she likes to collage for inspiration. Marsigliese appreciates the fact that she’s allowed the time to perfect the characters she designs and make sure that movement is part of the design. Her wardrobe has even been incorporated into character design for vintage-themed movies like The Incredibles 2.

Inside Pixar is a straightforward docuseries; ten-minute episodes that incorporate an interview with its subject and some behind-the-scenes work they do at the studio’s offices. There are lots of scenes of meetings and of people contemplating the direction they’ll go next in their writing, their artistry, or what have you. We see Marsigliese, for instance, doing wire sculptures, something that she didn’t know how to do before giving the idea that characters in Soul should be in that form.

As straightforward as these episodes are, however, we do appreciate seeing some inside look at Pixar’s culture. Yes, it’s a creative culture, that embraces people who think differently, dress differently and are independent in a lot of ways. The fact that the studio’s mission is so powerful that a diverse set of people, who may be used to working alone, gladly collaborate is provocative in its own way. But what the series is also letting viewers know is that Pixar’s corporate culture is committed to diversity and inclusiveness.

Could this be a response to former studio head John Lasseter’s departure under a cloud of sexual misconduct charges and allegations that women and people of color aren’t given equal input? Perhaps. Even if it is, Pixar is taking the opportunity to explain to its fans why it seems their films take care to be culturally appropriate and inclusive. Either way, the stories that are told by the various episode subjects are worth the ten minutes per episode.