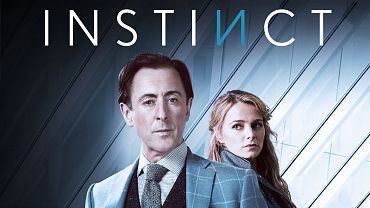 Review: Alan Cummings plays a former CIA agent now turned successful author and professor named Dr. Dylan Reinhart whose publisher Joan Ross (Whoopi Goldberg) tells Dylan that his most recent storyline is missing the magic that was present in his first book. Joan suggests to Dylan that he needs to become active in the field again to regain his lost writers mojo.

So Dylan agrees to tag team with a young and pretty blonde detective named Lizzie Needham (Bojana Novakovic) and their on screen tag team magic is quite evident from the get go. Detective Lizzie Needham and scholar/writer Dylan Reinhart feed off of each other in solving this the pilot episodes first murders. This particular serial killer murders each victim and at the murder scene the killer leaves one (1) of the fifty-two (52) poker playing cards to which Detective Needham and Dylan have to figure out the cards clue in solving the next murder before it happens

The TV series writers did more than an adequate job of keeping their audience in suspense and the on screen chemistry between actors Alan Cummings and Bojana Novakovic was very entertaining. This new series has some good momentum with this the pilot episode and I trust the series writers will provide new material each week to sustain and maintain a new audience.

I give the series an excellent 8 out of 10 rating and look forward to seeing more of the same.