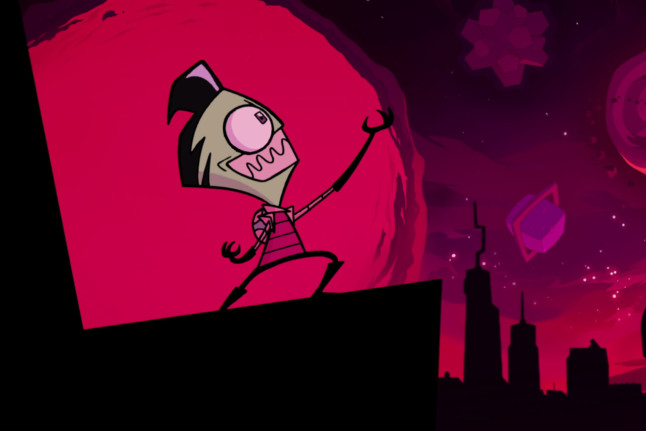 Invader Zim has never really been a story of heroism, at least not in the way most Nickelodeon cartoons are. Its characters were always too bitter, too gross (except for the cute robot GIR, obviously), too aggressively megalomaniacal, and too void of easy redemptions. But that’s always been by design. Its new Nickelodeon-on-Netflix comeback film Enter the Florpus, directed by series creator Jhonen Vasquez, leans all the way into these self-evident truths to put a coda on the original series, while finally giving Zim and his arch-nemesis Dib some feature-length closure and one last hurrah into the sci-fi action comedy unknown.

The 71-minute movie begins with an introduction from a tall, muscular Dib, stylized to look like every jacked-up macho anime character from ’80s classics like Fist of the North Star. Just like the show, Enter the Florpus is as much Dib’s movie as it is Zim’s, and his arc arguably better executed. Before long, we learn where the characters actually are at: Zim has disappeared from public view (but no less maniacal, cackling privately in his home toilet for an extended period of time). Dib has spent that time obsessing over where Zim could be, stewing in his own accumulated filth and stagnation such that he’s grown “grosser… smellier,” in the words of his cynical sister Gaz, and overweight to boot, while his ass has become fused to his computer chair.

Their respective positions feel a bit like Vasquez’s comment on the state of the Zim series since its third-season cancellation: a dynamic agent of chaos confined to a little toilet while an obsessive hater-fan stewing eagerly waits in front of monitor screens itching for his return feel a bit on the nose. Nickelodeon pulled the plug on Invader Zim’s ambitiously staged sci-fi action sequences and high-concept horrors in 2002, after just 27 half-hour episodes had been produced, but it remained an influential cult classic, informing future cartoons like Avatar: The Last Airbender all the way up to Steven Universe, Gravity Falls, Rick and Morty, and beyond. It crossed most lines you could conceive of in a “kid” show — including splicing in “Bloody GIR” Easter eggs and an episode where Zim removed the organs of live children (“Dark Harvest” FTW) — and fans ate it up.

While this new story takes some time to kick itself into gear, it’s every bit as ambitiously lurid. Once he realizes Zim is active again, Dib immediately gets himself fit, clean, and escapes his gross chair. And once Zim learns that the autocrats of his imperialistic race, The Tallest, have pointedly decided not to set a course for Earth, he engineers a twisty plot to bring the planet to them, incalculable lightyears away.

Zim uses Dib’s mad scientist father Professor Membrane (like Steve Jobs but more evil here) and his introduction of a new wearable arm bracelet technology, to take control of the children across the human race. Once billions of kids encircle the Earth by linking hands, a sci-fi reinterpretation of Hands Across America, Zim triggers his power source — a tiny moose named Minimoose (possibly cuter than GIR) imbued with cosmic energy, and the bracelets instantaneously teleport Urth through the fabric of space, directly into the flight path of the Tallest.

With this bold move, Zim wins. Cue the cackling! But he rips a hole in the space-time continuum in the process, endangering the Earth to be flung into a void of colliding infinite alternate realities. That’s the “Florpus” of tit all, and neither Zim nor Dib can save the Earth from it alone.

The funny thing about the Florpus is that it only shows up more than halfway through the movie and it’s also not referenced at all before it does. The Florpus feels almost incidental to the larger conflict of the movie — the mirrored antagonism of Zim and Dib. The film may be titled Invader Zim: Enter the Florpus, but the title screen that precedes Invader Zim reads Dib Membrane vs., after all.

“From the moment my mission began on this horrible planet, you’ve been there, haunting my every move like a squak in my schmoopsquizz,” Zim reminds us after the opening credits have barely rolled. These two despise each other, and yet they can’t stay apart.

Neither the Tallest nor Professor Membrane model very good behavior for Zim or Dib. Despite Zim’s best efforts to impress them as a conqueror of worlds, the Tallest abandon, gaslight, and shun Zim at every opportunity — seemingly for no reason other than the fact that they find him annoying. And despite Dib’s best efforts to prove to his science-minded workaholic dad that his alien-hunting efforts aren’t a make-believe game, Professor Membrane refuses to acknowledge them — even as he careens through myriad realities, all with an impressively distinct animation style, he shouts about how none of what’s happening is real — but is perfectly fine with his 12-year-old son wasting away unshowered in a dark room for months.

Enter the Florpus does a good job of framing these daddy issues as core to Zim and Dib’s obsessive compulsions to dominate Earth and expose the alien threat, respectively. The movie plays Zim’s plight more for physical comedy (especially when the Tallest get their eventual comeuppance), but exchanges like the early one between Dib and his father genuinely tug at the heartstrings: “I wish, just once, you’d have my back,” Dib tells his dad when Professor Membrane dismisses the mountains of evidence he’s assembled in the garage.

By the end of the movie — even though, again, this isn’t really a story about easy redemptions — Professor Membrane affirms that he does have Dib’s back. (Professor Membrane saves Dib using a Kamehameha Wave fired from his robotic hands in a scene obviously meant to evoke another masterful father-son pop-culture moment: the iconic Gohan and Goku vs. Cell fight from Dragon Ball Z.) And Zim does eventually fail to conquer the Earth, but not before causing realities to collide and engineering the deconstruction of the movie’s art style, easily the pinnacle achievement of the whole production.

Formal conventions go out the window in the moments after Zim shouts “Zim has won!” and it’s this scene, the dazzlingly animated space battles, and the firehose stream of gross and morbid humor that make Invader Zim: Enter the Florpus well worth the long, 17 year wait.

Sign up here for our daily Thrillist email, get Streamail for more entertainment, and subscribe here for our YouTube channel to get your fix of the best in food/drink/fun.