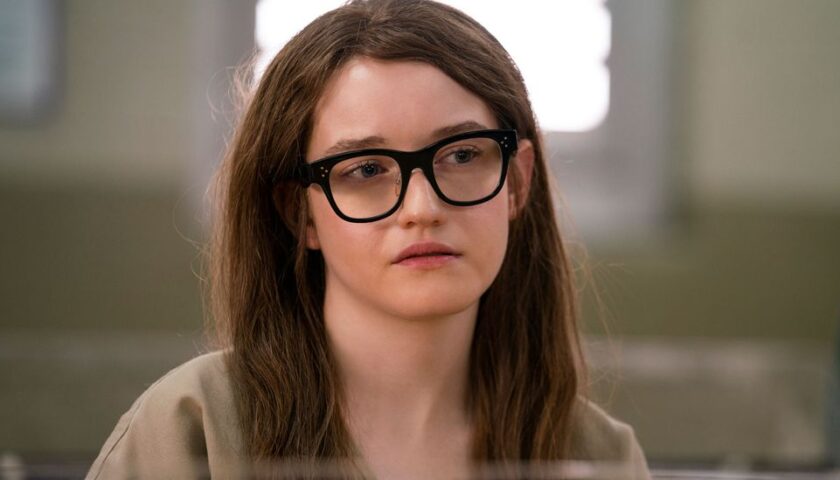 When “Inventing Anna” taps into what made New York City scammer Anna Delvey (née Anna Sorokin) such a fascinating flashpoint, it’s easy to get sucked into its orbit. When it gives its actors enough meat to sink their teeth into, it can be as fun a distraction as Anna’s wilder nights were for the various sidekicks she picked up along her way to true notoriety. But much like its inscrutable anti-heroine (played with an even more inscrutable accent by Julia Garner), Shonda Rhimes’ new Netflix series becomes a more frustrating knot of contradictions the more you try to untangle it.

In retelling Delvey’s salacious and undeniably delicious tale of besting Manhattan power players, the limited series is at its best when zipping through snappy “Scandal”-esque banter, but is also weighed down by oppressively long episodes. (The shortest clocks in at 58 minutes, while the finale runs almost a full hour and a half long. Why the show didn’t just turn its nine rambling episodes into 10 more succinct ones, I cannot tell you.) With the help of an apparently generous Netflix budget, it spares no expense in its portrayal of jaw-dropping wealth, but still retains the flat cinematography of a broadcast network drama cutting corners. Weirdest and most damning of all, the entire series hinges on Anna’s relationship to the journalist who puts her on the map, a specific and limiting narrative framework that only ends up working against it.

Based on Jessica Pressler’s 2019 New York Magazine story, “Inventing Anna” recasts Pressler as Vivian Kent (Anna Chlumsky), a writer who shares enough characteristics with her inspiration — a drive to prove herself beyond a bygone reporting screwup, an inconveniently timed pregnancy — but also distances herself just enough that the show can dramatize her dynamic with Anna as something more akin to Clarice approaching Hannibal than a reporter doing her job. (Every episode begins with a disclaimer that the show is true, “except for all the parts that are totally made up,” a caveat that proves especially important for the final couple episodes depicting Anna’s conviction beyond the article’s publication.) It stands to reason and history that Rhimes would want to put a deeply flawed professional woman at the center of this series, the first she herself has created for Netflix, thus following in the footstepss of Meredith Grey (“Grey’s Anatomy”) and Olivia Pope (“Scandal”). Unlike Ellen Pompeo and Kerry Washington, however, Chlumsky struggles to lock into the specific cadence Rhimes’ dialogue requires, instead doubling down on an oppressive acidity that bleaches the bite out of every sentence.

By the time we met Vivian, her blowhard editor Paul (Tim Guinee) has banished her to “Scriberia,” a far-flung corner of “Manhattan Magazine” otherwise populated by older writers with little patience for their flashier millennial cohorts. Played by Terry Kinney and Shondaland alums Anna Deveare Smith (“For the People”) and Jeff Perry (“Scandal”), this Greek chorus of jaded writers keep both Vivian and her storyline afloat, not so gently prodding her in the right direction when her basic journalistic instincts seem to have gone on vacation. But the cranky denizens of Scriberia can’t do everything for Vivian, and so she keeps barreling down her own path, losing the plot and snapping at her husband (Anders Holm) as she chases leads to their most obvious conclusions.

Vivian’s dogged pursuit of the truth behind Anna’s façade is what’s supposed to drive the entire series, but it’s hard to root for her when a source has to remind her that Anna’s Instagram might be useful, or when she stares down a wall of selfies and marvels at Anna’s audacity to mark the different stages of her life with different hair colors. (Trust me: You don’t have to be a scammer to dye your hair in a time of crisis!) And even as the show insists that Vivian’s determination to get the truth is all-consuming, it never comes up with a satisfying answer as to why. Sure, Vivian craves redemption. Of all the stories she could have chosen, though, why choose Anna Delvey’s? What are Vivian’s actual reporting interests, besides reporting in general? For having Pressler on hand as a producer, “Inventing Anna” has a surprisingly loose grasp on the pivotal character it bases on her.

Perhaps “Inventing Anna” could’ve made Vivian a more coherent anchor if it also weren’t trying to cram in as many perspectives as possible. Every episode is ostensibly dedicated to a different character’s side of the evolving story, such as personal trainer Kacy (Laverne Cox, underused), humiliated editor Rachel (Katie Lowes, very good) and patrician patron Nora (Kate Burton, solid as always). This approach does sell just how wide-reaching Anna’s circle and influence was, but it also diffuses the show’s direction to a distracting degree. What’s more, if “Inventing Anna” is to depend on Vivian’s fascination with Anna, it does itself no favors by presenting several other characters who might have done the job better. Anna’s loyal friend Neff — Pressler’s most talkative on the record source, whose real life counterpart also acts as an “Inventing Anna” consultant — could have made a decent guide, though Alexis Floyd’s portrayal doesn’t allow much room for nuance. So could have Anna’s conflicted lawyer Todd (Arian Moayed), who has real reasons for becoming as invested in his client as he does (and Moayed, just as he does as Stewy on “Succession”, blows his every line read out of the water). It takes far too long for Todd and Anna to have a significant two-hander scene together, but when they do, it’s a barnburner that makes Vivian’s every Rikers visit fade from memory.

It’s worth mentioning here that Garner is, as is no longer surprising, an endlessly compelling screen presence who easily sells Anna’s unique charisma. Her exaggerated pan-European accent is indeed ridiculous, but is nonetheless a fitting choice for a character that’s constantly performing for unwitting audiences. Garner gets plenty of juicy breakdown scenes, especially as the series nears its catastrophic end, that should get her ample attention — and yet, her best moments are more deceivingly banal. As Pressler’s original article stated, Anna’s biting candor wasn’t especially charming, or “even very nice” at all. But she was, or at least is through the “Inventing Anna” lens, a canny scalpel masquerading as a blunt force hammer. Even as the show around her stutters, Garner leans into her role with a vulpine, barely there grin that proves irresistible.

With so much material and such a tantalizing central character to work with, it’s understandable that “Inventing Anna” would try to balance as many spinning plates as possible. It’s just disappointing, if inevitable, that it drops as many as it does given all the talent, runtime and money it had to work with. For as much as the series does to decipher her, or at least the cultural fascination with her, Anna Delvey remains an enigma both onscreen and off.