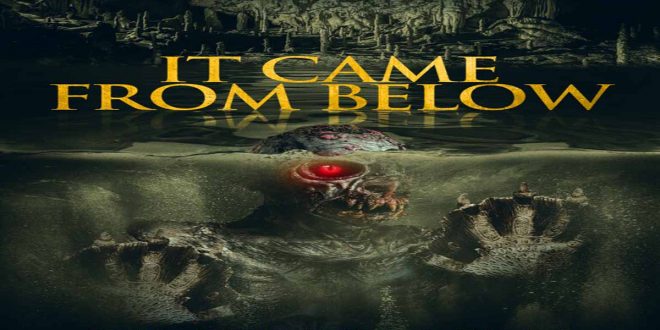 It Came from Below 2021 Movie Review Poster Trailer Online

When you think of movies about monsters in caves what comes to mind, probably The Descent and maybe The Cave. Or, if you’re like me, Alien 2: On Earth and Inseminoid. We have a new entry in the genre, It Came from Below, and it wants you to think of it. Will you? And more importantly, will it be for the right reasons?

Jessie (Megan Purvis, The Young Cannibals, Hatched) has just lost her father after a caving expedition went horribly wrong. He claims alien creatures (Luke Robinson, Prototype) attacked and ate the other members. Nobody believed him.

Jessie and her friend Sam (Jake Watkins, Cupid, Don’t Speak) decide to go into the cave and find proof that these creatures exist to vindicate him. Sam’s not opposed to making a few dollars off of it either. He’s also invited his girlfriend Joanna (Georgie Banks, The Mermaid’s Curse) and friend Marty (Tom Taplin, Arthur & Merlin: Knights of Camelot) who has history with Jessie, along to prop up the bodycount.

Once in the cave they actually have little difficulty proving the creatures exist. Getting out alive with the proof may be a different matter.

Director Dan Allen (Unhinged) and co-writer Sam Ashurst (A Little More Flesh, Vampire Virus) open It Came from Below with a look at the last few minutes of the doomed expedition. Shot mostly in darkness and helped by some gruesome sound effects, it’s an effective way to start the film. Unfortunately after that it loses steam fast.

If you were going looking for a creature that killed and ate your father’s friends you would go well prepared, right? Especially if you were going to be looking in a cave. These four bring some yarn to mark their trail with, headlamps and a camera. No rope, rappelling gear, or weapons. They aren’t equipped for a day trip in a beginner’s cave let alone going “miles underground” as It Came from Below’s poster says.

Around the forty minute mark the creature returns, crawling along the roof of the cave no less. Things start to pick up again as we also get the addition of a couple of cavers who’ve been trapped down there long enough they seem willing to eat human flesh as well as a pair of distinctly unprofessional and inept park rangers.

There’s plenty going on, certainly more than in a lot of films that have producer Scott Jeffrey’s name on them. The problem is the script is so badly written and there’s so little explained that it gets confusing. For example Marty suddenly freaks out and attacks the others before running off into the darkness. It seems to have something to do with the cave paintings but exactly what is a mystery.

Equally mysterious is whether Sam is Jessie’s friend or brother. It Came from Below’s credits give them different last names and credits Stuart Packer (Vehemence) as “Jessie’s Dad”. The film’s publicity refers to the foursome as “a group of friends”. But Sam constantly refers to him as Dad as well talking about not getting to know Jessie when they were kids. Were they meant to be half/step siblings and I missed it?

The creature itself is supposed to be an alien who has been stranded on Earth but we see no proof of it. And there’s probably better ways to get back to wherever it came from than hiding in a cave and eating people. Especially as it seems to have some kind of telepathic powers that like everything else It Came from Below’s script leaves very vague. The creature at least looks good with a bug-like head and nasty looking claws. It’s wisely kept in the darkness much of the time which helps hide the fact that the rest of the suit isn’t as impressive.

It Came from Below 2021 Movie Review Poster Trailer Online