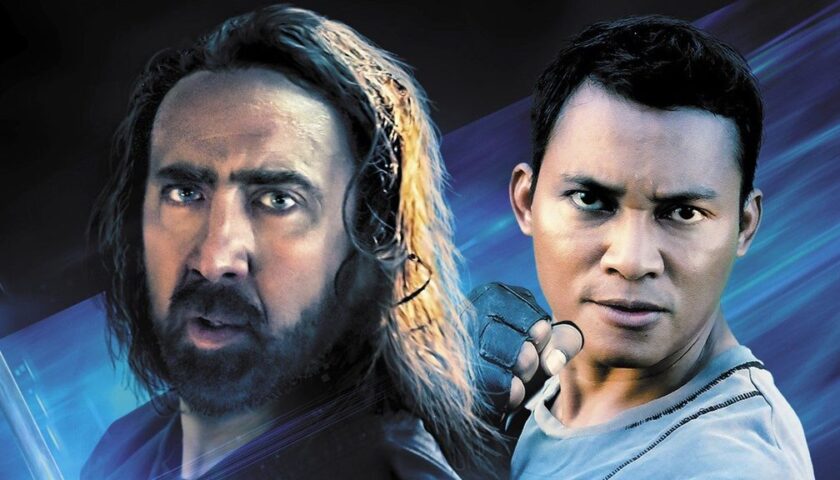 A movie made for young men whose parents or girlfriends have insisted they put down their gaming consoles for one goddamn night or it’s over, Dimitri Logothetis’ Jiu Jitsu has all the barely-motivated action and sci-fi trappings of a middling videogame and, well, at least a little of the dramatic value. Reteaming with Alain Moussi, star of his previous film Kickboxer: Retaliation, Logothetis finds nearly none of that film’s tongue-in-cheek, pulpy appeal (modest though it was). His only hope in that department, supporting player Nicolas Cage, occasionally keeps scenes from putting the viewer to sleep, but hardly justifies the existence of this monotonous, unimaginative actioner.

Moussi, a lean, reasonably handsome martial artist who hasn’t yet developed the kind of screen presence that might help him become a Van Damme-like genre star, plays an amnesiac who is fished, Jason Bourne-style, out of the sea off the coast of Burma. (They don’t call the country Myanmar here, for reasons nobody explains.) Badly wounded, he’s stitched up by local villagers before being brought to a U.S. Army base whose soldiers weren’t hired for their acting chops.

Interrogators there think he’s a plutonium smuggler. But before they can decide to believe his “I don’t remember who I am” routine, a mysterious fighter comes to rescue Moussi from captivity. Played by Tony Jaa, the stranger is less about the surgical strike than the path of most resistance: A long sequence staged like a first-person shooter shows the action through Moussi’s eyes as we follow Jaa throughout the compound, watching him kick the stuffing out of one faceless soldier after another, after another.

Though the first-person gimmick is thankfully a one-off for this scene (the perspective will flip around later, with a quick SnorriCam sequence showing soldiers’ faces as they’re attacked), the game-like pacing is not. Viewers find themselves in a string of overlong fight sequences whose duration rarely seems determined by the needs of the plot. Worse, Logothetis sends DP Gerardo Madrazo careening through the action as if he’s trying to snatch a bottle of Ritalin out of a fighter’s pocket: Constant movement plus frequent slo-mo and other effects make it very hard to appreciate the physicality of cast members who, as near as we can tell here, probably do know how to fight.

In between the fights and chases come cutscene-like blips of exposition, in which we learn that Moussi’s character is Jake, the leader of a team with a very important job: Every six years, a comet passes Earth, opening a portal through which a “warrior spirit” (actually an alien called Brax) appears. Centuries ago, this warrior actually introduced Earthlings to the fighting styles they employ here — seemingly so he’d have something to do whenever an intergalactic portal brought him to town — and if Jake doesn’t kick his butt before the portal closes, Brax will be stuck here to wreak havoc all over the planet.

Some of this story comes from Cage’s Wylie, who isn’t part of Jake’s team but has been around the block with Brax. Sometimes seeming to borrow from Dennis Hopper’s performance in Apocalypse Now, Cage doesn’t access his most unhinged energies. But he’s just off-kilter enough to spice up an otherwise forgettable scenario that borrows pieces from Predator, The Highlander and assorted other genre pics without deriving any fun from them. Cage isn’t as underused as costar Frank Grillo (not to mention Jaa, who may never again get to wow us with the Jackie Chan-like athleticism of 2003’s Ong-Bak), but a few witty lines from him would’ve gone a long way.

Throughout, FX teams were evidently not asked to make action look convincing. When Brax shoots razor-edged projectiles at people, they fly through the air as if they were coming from a dozen different places at once; the cheesy CG blood that splatters when people are hit (are squibs that big a hassle?) are a shade of red that’s incompatible with the lighting environment of the rest of the scene. But how much can you expect of a film whose opening scene features what looks like a wad of steel wool hurtling through space toward our imperiled planet?