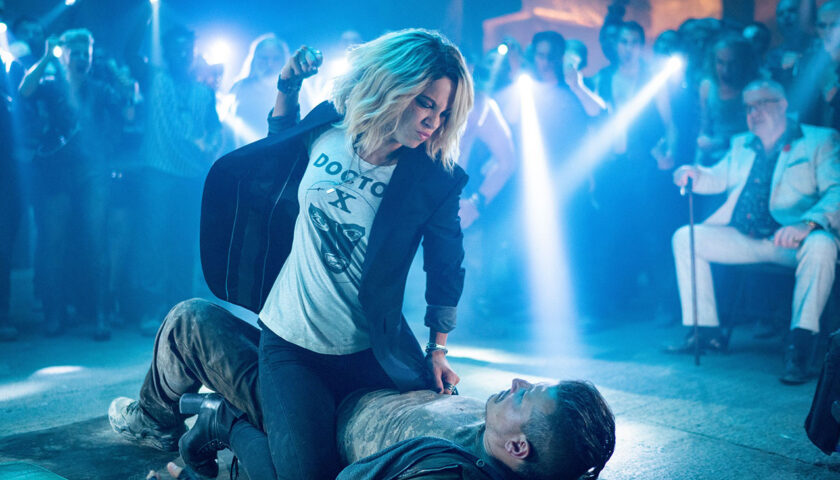 That Kate Beckinsale, weighing all of a “buck-o-eight,” as it’s suggested at one point, beats up a bunch of burly goons without as much as getting a scratch on her doesn’t bother me nearly as much as the notion of an accountant being that buff. I mean, she’s got some whatever make-believe medical condition that gives her anger problems super strength, so that checks out by movie logic. Hulk if his pupils dilated instead of him turning into a giant green Mr. Hyde monster. But, how was anyone supposed to believe the jacked Jai Courtney is a boring accountant? Talk about suspension of disbelief.

Anyways, how is “Jolt” not a comic-book superhero movie? Marvel does have a heroine named “Jolt,” I see, but apparently she’s unrelated, and this is supposedly an original scenario… well, not too original. Just last week, Netflix released their own pulpy female assassin revenge flick, “Gunpowder Milkshake” (2020), that every other person will compare to “John Wick” (2014). Amazon not to be outdone, here we are again. Beckinsale’s blonde hair also invites comparisons to “Atomic Blonde” (2017). Not that I’m necessarily complaining; I oft like this trashy nonsense. This one benefits from being relatively potty-mouthed and sexually perverse with Beckinsale’s BDSM play of electrodes covering her torso and handcuffing herself to keep her urges in check. Her apartment number plate falls loose every time her door slams, to display “96,” but I think we all know that number is upside down.

Too bad there are some huge flaws here, though. The action scenes are rather poor in comparison to the aforementioned similar movies. When the cutting isn’t choppy enough, it’s evident that the stunt work isn’t the best. Easy enough in itself to overlook, but worse is that the movie begins with five minutes of exposition, as narrated by Susan Sarandon, who only otherwise makes an appearance to establish plans for a sequel and tell the heroine, “Mr. Stark, you’ve become part of a bigger universe. You just don’t know it, yet.” Or something to that effect. I mean, is this really not based on a comic book? Someone please tell me it is. Or have we just reached the point where random action movies attempt to be the next MCU? The fantasies and flashbacks also have the appearance of “Family Guy” cutaways, and that’s not a compliment.

I’m especially confused, too, by nothing seeming to be done with the protagonist wanting to be a photographer, which is a highly reflexive notion (i.e. Camera as character) to throw out in a movie and not do anything with it. She also later retrieves photographs from what appears to be a film cannister. Curious. Oh, and Stanley Tucci, among other familiar faces, is in it, too.