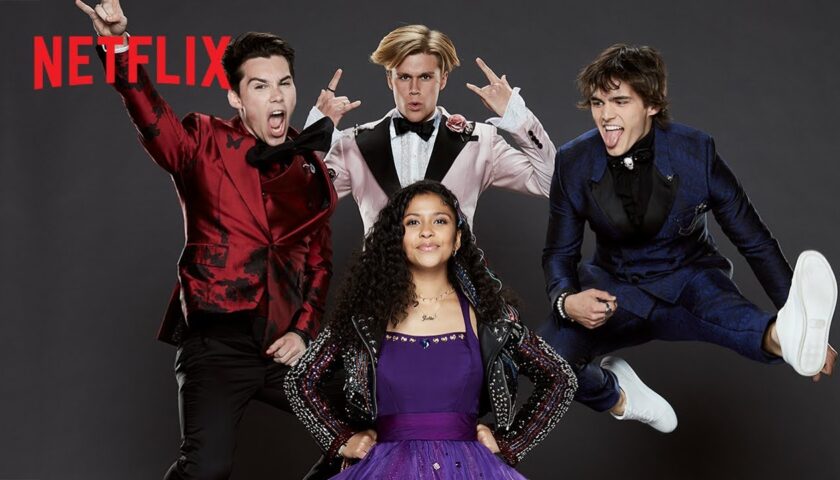 Netflix has released the official trailer for Julie and the Phantoms, a new TV show from executive producer Kenny Ortega (High School Musical) and choreographer Paul Becker (Descendants). The new show combines a coming-of-age story with music and — wait, let me check my notes here — ghosts, resulting in a sweet story about a teenager trying to find her voice in the wake of her mother’s passing.

The trailer for Julie and the Phantoms is as heartwarming as it is fun. We’re introduced to Julie (newcomer Madison Reyes), a meek high schooler with a passion for music that has a shadow over it after the death of her mother. When Julie needs her mom most, she gets a little help from an equally spectral, but very surprising, helping hand in the form of a deceased trio of male rockers. These ghostly guys (Charlie Gillespie, Owen Patrick Joyner, Jeremy Shada) all recognize Julie’s talent and agree to help her pursue her dreams of music stardom while trying to finish their own earthly business before it’s too late. And sure, Julie and the Phantoms is aimed at a younger demo than the one I am currently part of, I am so thoroughly charmed by what I’m seeing in the trailer. Why not tune in for something light and energizing and, most importantly, which normalizes the idea of ghost-human teenage romance?

The first season of Julie and the Phantoms consists of nine episodes, each with a 30-minute runtime. This musical teen series comes from showrunners and executive producers Dan Cross and David Hoge (The Thundermans, Pair of Kings). Ortega and George Salinas also serve as executive producers.

Julie and the Phantoms will be released on September 10. You can watch the trailer below. For more, here’s the complete list of everything coming to Netflix in September.

Here’s the official synopsis and poster for Julie and the Phantoms. High schooler Julie (Madison Reyes) lost her passion for music after her mom died last year. But when the ghosts of three dreamy musicians (Charlie Gillespie, Owen Patrick Joyner, Jeremy Shada) from 1995 suddenly appear in her mom’s old music studio, Julie feels her own inner spirit beginning to reawaken, and she’s inspired to start singing and writing songs again. As their friendship with Julie grows, the boys convince her to create a new band together: Julie and the Phantoms.