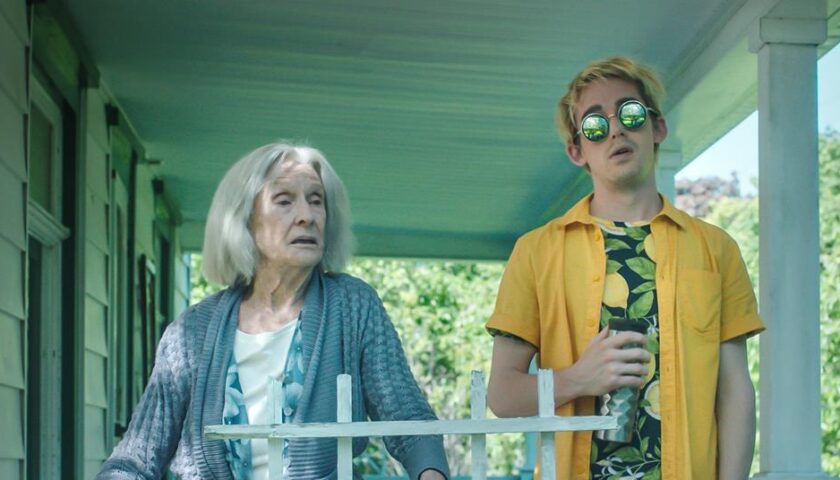 Not even the final feature for recently-deceased Cloris Leachman (she put two more in the can before passing this January at age 94), “Jump, Darling” nonetheless is primarily of interest for that veteran performer’s participation. Otherwise, writer-director Phil Connell’s debut feature treads ground similar to last year’s “Stage Mother,” whose somewhat retro emphasis on lip-synching drag performance as a vehicle for self-realization likewise recalled a much earlier dramedy from Canada, “Outrageous!”

If that theme was groundbreaking 44 years ago, it seems rather quaint now, and “Jump” doesn’t help its case by centering on a troubled young protagonist whose issues are as murky as their apparent solution (i.e. wigs, spotlight, diva trax) is simplistic. However, playing his senile yet still tart-tongued grandmother, Leachman lends the film a certain unforced gravitas that provides compensational rewards. Those looking for familiar seriocomic beats in a modest but polished LGBTQ-targeted indie will find this pleasant enough. Currently playing gay festivals, it seems likelier to attract home-formats buyers than theatrical sales.

Russell (Thomas Duplessie) is an unhappy camper. He left his small town for Toronto some years before to make it as an actor, then didn’t. His longtime boyfriend (Andrew Bushell as Justin) tells him he should quit doing “this gay variety show shit” and “get back into acting,” even if it takes their moving to New York or Los Angeles. Somehow this advice causes Russell to get drunk, walk out on his club drag act and leave the boyfriend — as well as their dog. What is his plan? What does he want? He doesn’t seem to know. It is the central flaw of Connell’s screenplay that we never really do, either, nor do we care much. “Jump, Darling” flirts with darker issues, including possible hereditary mental health concerns … but mostly Russell just seems petulant, even a bit of a brat.

He does have an immediate plan: taking up grandma Margaret (Leachman) on the proffered gift of her old car. He surprises her at home alone in rural Prince Edward County, unaware she’s just nearly burnt the place down, but quickly sussing that she is operating at less-than-full capacity. (For one thing, her refrigerator is almost empty.)

Nonetheless, he makes use of the car that very night — to attempt an asphyxiation suicide in the garage. Granny puts a stop to that, and a chastened grandson agrees to stick around for a while, since she obviously needs some help. Soon he discovers there’s now a “gay-ish” bar hereabouts, where he arm-twists proprietress Hannah (Kate Messina) into permitting a drag showcase for himself, and also exerts a different kind of pressure on hunky barback Zach (Kwaku Adu-Poku).

While handled in a low-key fashion by both performer and filmmaker, the best articulated element here is Margaret’s plight as a sardonically intelligent woman with past burdens (including her husband’s suicide) who’s now grown very frail in body and mind. She increasingly cannot care for herself, but doesn’t want to move into an assisted living facility, as Russell’s well-meaning mother Ene (Linda Kash) keeps insisting upon. She is ready to pack it in. Though at first it may seem Leachman herself has gone a bit vague, this subtly authoritative performance underlines the dignity of a person who realizes they are losing control of their faculties, and does not wish to keep plodding on regardless.

On the other hand, Russell comes off as an unsympathetic cipher, though there’s nothing particularly wrong with Duplessie’s turn. It’s just that we aren’t given to understand what’s going on with this protagonist: Is he fighting depression, alcoholism, “fear of ambition” (Justin’s theory) or what? Those ideas get raised but aren’t followed through on, just as the relationship with Zach becomes thorny before it’s actually gone anywhere.

The lead actor does OK in flamboyant full drag, miming to tracks by Robyn, Scissor Sisters and others. Even so, his channeling a stock inner “bitchy queen” in the guise of alter ego “Fishy Falters” hardly seems breakthrough stuff, either psychologically or artistically. Nor does it seem very credible that he’s pursued by an impresario (Mark Caven) to return to a showcase in a Toronto drag scene simultaneously portrayed as cut-throat and marginal. When Canadian drag personality Tynomi Banks (aka Sheldon McIntosh) turns up to deliver some tough-love wisdoms in a penultimate scene, it’s as hokey as “42nd St.” — or “Showgirls,” for that matter — with no campy irony perceptible.

If “Jump, Darling” is an outwardly formulaic gotta-be-me tale that rather fumbles the internal details, it does still play smoothly enough as a directorial and production package. Making the biggest contributions toward a slick overall assembly are Viktor Cahoj’s widescreen cinematography and Allison Zwicker’s resourceful production design.