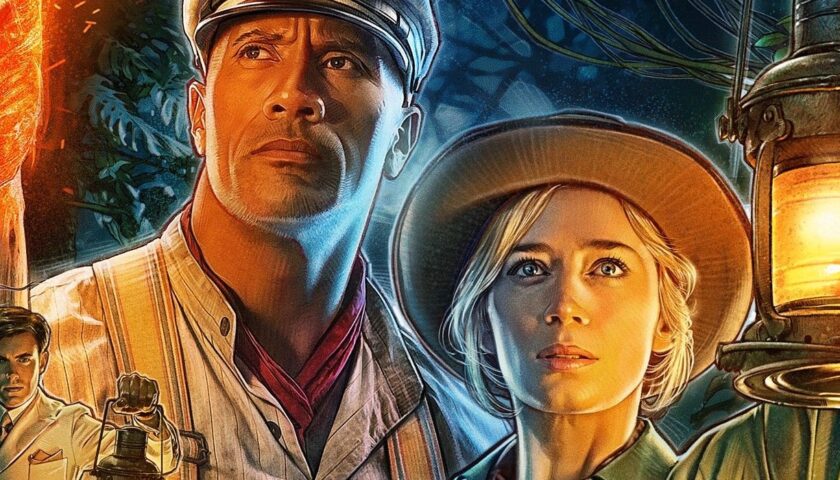 The Times is committed to reviewing theatrical film releases during the COVID-19 pandemic. Because moviegoing carries risks during this time, we remind readers to follow health and safety guidelines as outlined by the Centers for Disease Control and Prevention and local health officials.

Starting this Friday, if you’re willing to spend the time (a little more than two hours) and money (either the price of a theater ticket or a $29.99 Disney+ Premier Access fee), you can watch the new “Jungle Cruise” movie, a technologically newfangled, dramatically old-fashioned action-adventure inspired by the long-running Disney theme-park ride. Alternately, in much less time (eight minutes) and for no money at all, you could watch a video recording of said theme-park ride on YouTube.

I don’t mean to suggest that these are equivalent experiences exactly. Personally I prefer the YouTube version, which may have been filmed in a giant Anaheim water tank festooned with imported plants and mechanical elephants, yet still somehow manages to offer up the less artificial, more persuasively inhabited jungle scenery of the two. Enthusiasts of Dwayne Johnson, Emily Blunt and the color orange, however, will probably want to spring for the longer, shinier, digitally enhanced version, perhaps hoping that, like Disney’s “Pirates of the Caribbean” movies — the first one, anyway — it will succeed in turning a slow-moving boat ride into an energetic, nostalgia-tickling cinematic diversion.

And to be sure, this “Jungle Cruise,” serviceably directed by Jaume Collet-Serra (“The Shallows”), does reproduce some of the ride’s signature pleasures in elaborate computer-generated form: the leafy overgrowth, the exotic wildlife, the gently flowing stream. By that I also mean the stream of puns rattled off by the skipper, who is played by Johnson. That he represents an upgrade over the average Disney park employee — no offense, average Disney park employee — is hard to deny. And whether you’re wordplay-averse or (like me) think the whole enterprise should have been retitled “Pungle Cruise,” the mischievous wit that has always undergirded Johnson’s brawny physicality serves him well in this department. What a dorky, deadpan delight to hear him say things like “toucan play that game” or point out that certain rocks are “taken for granite.” (Certain Rocks too, surely.)

Being a full-length feature, of course, “Jungle Cruise” does have to traffic in niceties like plot, character and mythology, even if the result, scripted by Michael Green, Glenn Ficarra and John Requa, is derivative to the point of desultory. Johnson is Frank, the wily captain of a rickety Amazon River tourist trap, trying to eke out a semi-honest living amid stiff competition from a local bigwig (Paul Giamatti). Blunt plays Frank’s latest passenger, Lily Houghton, an apt name for a high-minded English botanist who’s trying to find the “Tears of the Moon,” a legendary flower known for its astonishing healing powers. Fate brings these two singularly stubborn individuals together for a long and bickersome journey downriver, pitting Frank’s cynical self-interest against Lily’s naive idealism and pairing Blunt’s reliably withering eye rolls with Johnson’s famously expressive eyebrows.

The chemistry generated by all this ocular sparring is not negligible, and it powers this waterlogged star vehicle through its busy, semicoherent action sequences and squalls of narrative incident. It’s 1916 and World War I is raging, which at least partly explains Jesse Plemons’ over-the-top turn as Prince Joachim, a mustachioed German villain who will butcher any person or vowel that stands in his way. He’s determined to harvest the Tears of the Moon before Lily does, even if it means steering a U-boat down the Amazon in hot pursuit. And hot is the operative word, given the sweltering Brazilian temperatures, hinted at by the oppressive ochre tones of Flavio Labiano’s digital cinematography and the sweat beads you can practically see clinging to Paco Delgado’s costumes.

Speaking of which: Also along for the ride is Lily’s brother, MacGregor (Jack Whitehall), who has dapper tastes, packs way too many suitcases and, as the movie seldom tires of reminding us, is comically ill equipped for any kind of rugged living or heterosexual entanglement. But worry not: Once it’s done poking fun at an effeminate male stereotype, the script swoops in with a cautious coming-out monologue perfectly tailored to generate a fresh round of headlines celebrating and/or criticizing Disney’s latest LGBTQ milestone. This being Disney, of course, we’re quite a long way from, say, the family-unfriendly subversions of “I Love You Phillip Morris,” Ficarra and Requa’s joyous 2010 comedy of queer awakening. Even within these ostensibly punny parameters, the only jungle cruising that goes on here is all too literal.

Still, MacGregor’s blip of a backstory isn’t the only instance in which this early 20th century epic nods to a decidedly 21st century audience. As my Times colleague Todd Martens recently examined in a thoughtful, deeply reported piece, the Jungle Cruise ride, a Disneyland fixture since the park opened in 1955, recently underwent a significant overhaul that jettisoned its racist depictions of Indigenous people. The movie, through some clever tinkering, accomplishes something similar, turning its gallery of spear-brandishing headhunters into a sly joke at the expense of Western colonialist assumptions. The real villains here are Plemons’ power-hungry prince and his army of undead Spanish conquistadors, one of whom (played by Édgar Ramirez) is none other than Aguirre himself. That historical nod conjures some wishful Herzogian overtones in a movie otherwise conceived under the spell of “The African Queen” (itself a design influence on the original ride), Indiana Jones, “Romancing the Stone” and other films from an earlier era of cinematic adventure seeking.

To watch those films again may be to plunge back into a world of cheap jokes and retrograde attitudes. But it’s also to be reminded of what mainstream American movies looked like before the era of wall-to-wall visual effects, the kind that’ve turned the modern blockbuster into a shiny, increasingly soulless and sometimes flat-out ugly proposition. “Romancing the Stone” had live snakes and snapping alligators and an appreciably real sense of peril; this movie has a digitally fabricated jaguar, among other computer-generated creepy-crawlies, and not a real thrill or scare among them. “Jungle Cruise,” despite its more-than-capable leads and its much-vaunted attention to detail and verisimilitude, never feels transporting in the way that even mediocre blockbusters were once able to muster. It’s less an expedition than a simulation, a dispatch from a wild yet oddly pristine world where seeing is never close to believing.