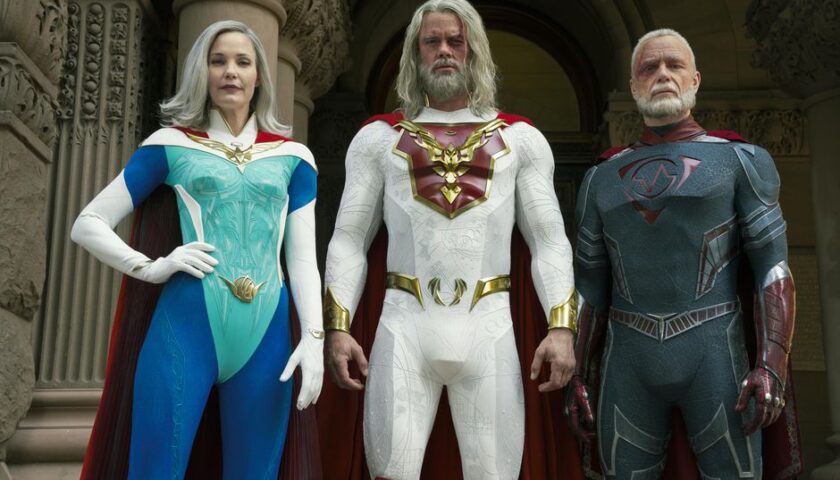 Welcome, one and all, to the first television adaptation of a Mark Millar comic, and the first fruit of Netflix’s £25m purchase of his publishing house in 2017. It is Jupiter’s Legacy, a tale full of intergenerational superhero conflict, flashbacks to late 20s Chicago, and as much crash-smash-whizzbangery in among the parental guilt, boomer certainty and millennial angst as you could hope to find.

Sheldon (Josh Duhamel in such a bad wig – really, laws should be passed requiring part of the budget be ringfenced for these things) and Grace Sampson (Leslie Bibb) have a combined age of over 200 and trouble with their kids. Both these facts are largely due to their secret identities as superheroes. He is The Utopian and she is Lady Liberty, the superheroic leaders of a superheroic gang known as The Union of Justice. They gained their powers during the Great Depression and have been saving the world from supervillainy ever since. Their children Brandon (Andrew Horton) and Chloe (Elena Kampouris) have quite some act to follow. There ain’t no burden of parental expectation like the one dumped on your shoulders by a Superman-analogue who lives by a super-moral code.

Chloe has largely opted out, via drink and drugs. But Brandon still craves daddy’s approval and is still at home, learning the super-ropes and hoping to one day do the paterfamilias proud as The Paragon. Sheldon, ground down by 90 years of fighting the bad guys only to find the world stubbornly refusing to improve, remains unconvinced. His brother and fellow superhero Walter (Ben Daniels) urges Shel to lighten up and start adapting to the modern world by going after its true evildoers – corrupt corporations and politicians.

But who, asks Shel, would intervene if they started going down that road? What would happen to free will? This may be the weakest argument ever put for superheroes not doing whatever is necessary to save the world. Fortunately, distraction arrives in a call for both generations to converge on old-style superbadthing Blackstar (Tyler Mane), who has escaped from his supersecurity prison and must be apprehended. After many beams shooting out of many eyes and many fists throwing many fireballs, it ends badly for both sides, with a nice twist that will surely pull you into at least the next episode.

It’s all engaging enough, but a certain airlessness constrains the entertainment value. Millar has warned against people expecting another Kick Ass 2 or Kingsman (darkly funny adaptations of other Millar comics that pastiche their genre) and has described Jupiter’s Legacy as “sincere” and “a love letter” to the world of superheroes.

The problem is that it comes perilously close to taking itself too seriously. Any opportunity for fun is shut down by perpetually morose teens, action set-pieces we have seen many times before and clunky speeches about the state of the world (“The country has never been more divided,” laments Sheldon. “The gap between rich and poor just keeps getting bigger. Kids learning active shooter drills before they even learn their ABCs”). The occasional lighthearted moment would not negate the show’s sincerity. The confidence to include some might even display its depth.