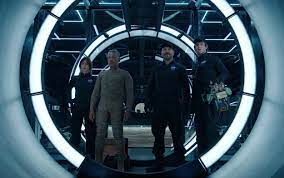 When they announced a series that could be watched in any order, not gonna lie, I was hooked. Especially considering that the show centres around a heist.

To pull this off, the writers team would have had to make an immense effort to establish a water-tight continuity, and to feature the stories and characters in a way that would make sense no matter when you start or finish. A tall order, but Netflix has had some brilliant shows before, so it wasn’t out of the realm of possibility.

The first thing I should tell you is that the promise that the viewers can watch the episodes in any order is misleading, at best. The way Netflix presents it to you, there are five episodes that can be watched more or less interchangeably (violet, blue, green, yellow, and orange), with the last three (red, pink, and white) always queued at the end.

After watching one episode, I realised that a completely random order would make no sense, because the episode that I watched offered no closure, which would be required if every episode could end up as the last one. That said, watching it chronologically or in the order presented by Netflix doesn’t paint a bad picture.

Sadly, the heist itself isn’t too exciting, and all the additional storylines just feel like filler. Furthermore, almost the entire cast of character are either unlikeable or unreasonably bland.

As if that wasn’t bad enough, there is some “romance” hamfisted into the show, which is just painful to watch. None of the characters supposedly attracted to each other have any chemistry. It was very awkward, unnecessary, and in case of a certain pairing, both baffling and uncomfortable.

Was there anything positive about this show? Sure. Visually, it is actually pretty well done, and the colour-coded episodes create opportunity for some cool lighting and props. The visual component was probably my favourite thing about this show. Except for the wigs. I don’t know what the costume department were thinking with those.

Finally, I can’t fault Giancarlo Esposito and Rufus Sewell for their performances. They are both solid actors, and all things considered, they did very well. I also quite enjoy the dynamic between Tati Gabrielle and her on-screen sister.

Overall, it could have been really great, but that would require a lot more effort from the writing team.