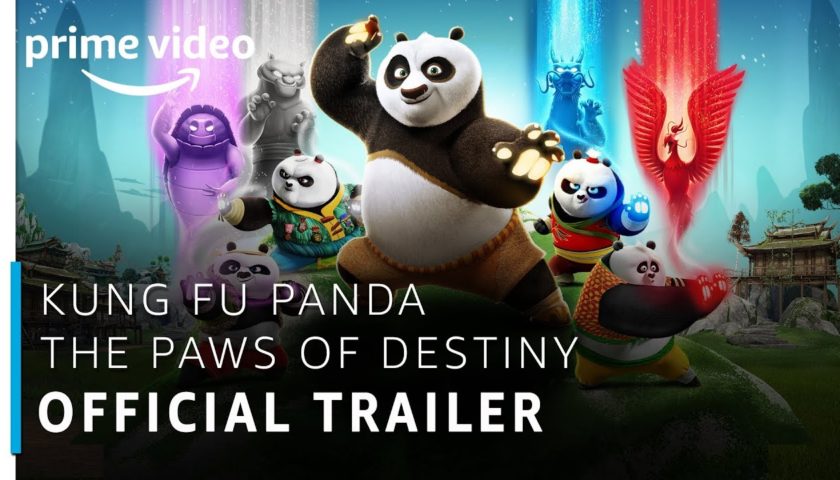 Review: It’s my absolute pleasure to bring you the first trailer for the new DreamWorks Animation Television series coming to Amazon this November, Kung Fu Panda: Paws of Destiny. In the new animated series, Master Po has his work cut out for him when four panda kids accidentally absorb the powers of ancient kung fu warriors … and have no idea how to use them. Set after the adventures of Kung Fu Panda 3, Kung Fu Panda: The Paws of Destiny features several references to the films along with new and familiar characters; viewers of all ages are in for a funny, surprising, and awe-inspiring adventure, as you can tell from this first trailer.

The series, which has “a similar tone to the movies,” Watson notes, with “a lot of humor and a lot of comedy, but there’s also a lot of adventure and drama,” features a cast including Chrissy Metz (This Is Us), Mick Wingert (Avengers Assemble, the Kung Fu Panda franchise), veteran actor James Hong (Kung Fu Panda franchise), Amy Hill (Kung Fu Panda: Legends of Awesomeness, Crazy Ex-Girlfriend), and Laya DeLeon Hayes (Doc McStuffins). This series marks the first time an original series from DreamWorks Animation Television will be made available to Prime Video customers worldwide.

Kung Fu Panda: The Paws of Destiny features new and favorite characters, starting with its beloved hero: Po, the wise, funny and patient Dragon Master. Voiced by Mick Wingert, fans will be thrilled to see the powerful panda back in all his glory.

“I’ve known Jack Black for a long time, and when I first heard Mick doing that voice, it was freaky,” Watson says. (Black voices Po in the feature films.) “He doesn’t just do the voice; he’s got Jack’s weird mannerisms, attitude and affections, and it’s really trippy. He does an amazing job.”

As for the four kids, they’re led by Nu Hai, the energetic leader of the group. Voiced by Haley Tju (The Who Was? Show, Bella and the Bulldogs), Nu Hai harbors big dreams of being a kung fu master, and what she lacks in skill she makes up for in heart and determination. Her admiration of Po borders on obsession, and she helps the group stay focused throughout their training. By absorbing the chi of Blue Dragon, Nu Hai is able to relax and hone in on her power.

Bao (Nashville’s Gunnar Sizemore) is Nu Hai’s twin brother. Unlike his sister, he has a mischievous streak and likes to play practical jokes and stir up trouble. It seems each panda kid is imbued with the ancient chi he or she needs, and this is certainly true for Bao; he absorbs the chi of the Black Tortoise, which gives him empathy and helps him learn to put others before himself.

Jing is a little offbeat and unconventional, but these qualities can come in handy for a kung fu warrior. Voiced by Laya DeLeon Hayes, Jing absorbs the chi of the White Tiger, a healing chi that also teaches her the power of kindness over aggression.

Rounding out the four panda kids is Fan Tong (Makana Say), a sweet and devoted friend who, incidentally, holds the record for being the biggest baby ever born in Panda Village. Fan Tong may be a bit fearful and nervous, but Po’s guidance and the chi of Red Phoenix help him gain confidence and embrace his power.

Li (Christopher Swindle) – Po’s biological father has a vast knowledge of Panda Village history. Now that Po is back, he wants to bond with him as much as possible … and did we mention they’re roommates?
Mr. Ping (James Hong) – Po’s Dad #2 comes to Panda Village, opens a franchise of his delicious noodle shop … and yep, he also moves in with Po.
Grandma Panda (Amy Hill) – The legal guardian of twins Nu Hai and Bao, Grandma Panda is full of energy and wisdom.
Jade Tusk (Cherise Boothe) – Jindiao’s loyal assistant would do anything for the villainous leader.
Mei Mei (Chrissy Metz) and the Baby Pandas – Fans of Kung Fu Panda 3 will remember this dancing diva as well as the tiny, comedic pandas who are always getting themselves into trouble.
Oogway (Piotr Michael) – Much as he did in Kung Fu Panda 3, Grand Master Oogway appears to Po in dreams to offer insight and encouragement.
Zhizhu (Jeff Bennett) – This giant spider protects the Wellspring, which contains all of the world’s chi.
Kung Fu Panda: The Paws of Destiny will premiere to a global audience that has been following Po’s adventures for years, while other viewers will step into his funny and epic world for the first time. Check it out on Amazon starting this November 16th!