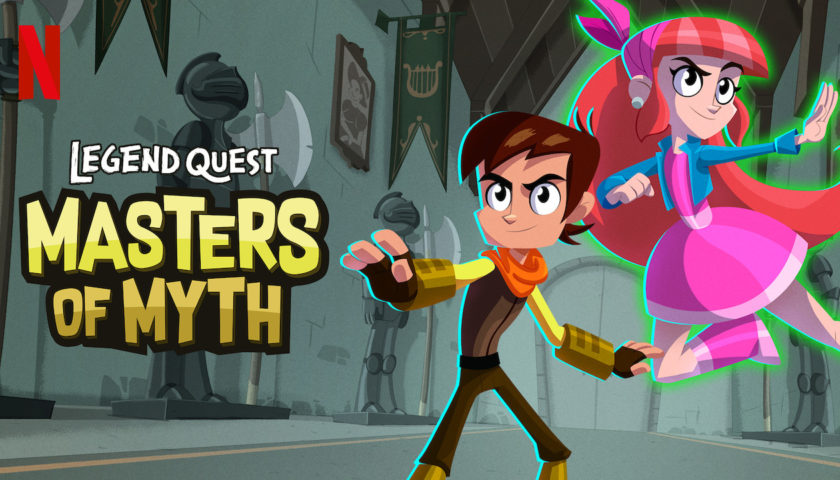 Netflix’s Legend Quest returns for a second season with Masters of Myth, another serialized animated adventure aimed at grade/middle schoolers, and laudable for its originality. It’s set during the 19th century and rooted deeply in Mexican folklore; the main protagonist is a young, resourceful Mexican boy who leads his friends on quests to capture monsters. Good concept, but the bland title Legend Quest makes it sound like the product of a random title generator designed to label third-rate fantasy novel series from 1983.

OOne of those Chinese waving-cat statues sits in a window. A rumble shakes the building.

Our hero Leo (voice of Johnny Rose) is in the middle of a precarious gig. A massive, tentacled beast is destroying a city. It’s not clear if the creature is Lovecraftian leviathan Cthulhu or not, but it sure would have been cool had it been the High Priest of the Great Old Ones, the Sleeper of R’lyeh, the Great Dread of the Dreaded Greats himself. Leo and his monster-hunting crew is about to be utterly smited by a tentacle and — well, it was only a dream, in the noggin of Godofredo (Paul Tei), one of Leo’s elders.

Anyway, Leo has ghost pals that only he can see — Don Andres (Oscar Cheda) is an ancient conquistador and a bit of a fraidy cat, Teodora (Annemarie Blanco) is a teenager from our modern era/Leo’s future who tends to roll her eyes a lot and stare at her smartphone and Alebrije (Paul Tei again) is a creature who looks like the offspring of a heffalump and Dino the dinosaur who’s been colored by a little kid trying to use every crayon in the box. Their next gig is to visit a castle and capture an imp that looks like a goblin-baboon. Leo lures it into something that looks like a medieval Ghostbusters trap, but it escapes; hijinks ensue.

Meanwhile, Teodora keeps riding Leo’s heinie about always following the orders of the elders who give him is monster-catching assignments. They capture the imp and meet with the elders, one of whom, Brother Upton (Chuck Morgan), shows a hint of a breath of something suspicious, so maybe Teodora is on to something? Said elder tells them their next mission is to Egypt, but first, they have someone special to meet. Intrigue!

This episode isn’t an ideal introduction for a newcomer — it drops us in the middle of some action and catches us up with exposition later, but the primary problem is its blase dramatic flatness. Frankly, it’s not all that exciting. The animation is well-rendered, but outside a couple of action sequences, I can’t see this mostly talky episode holding the attention of younger viewers. And Teodoro has a rotten attitude for no apparent reason.

Conceptually though, Legend Quest is ambitious, and seems ripe for the type of in-depth stories that so many kids’ shows don’t even try to tell — it’s serialized, and the second episode picks up right where the first left off. Don’t judge it on one episode; be patient; let it develop. In other words, pray its audience hasn’t been completely ruined by YouTube.