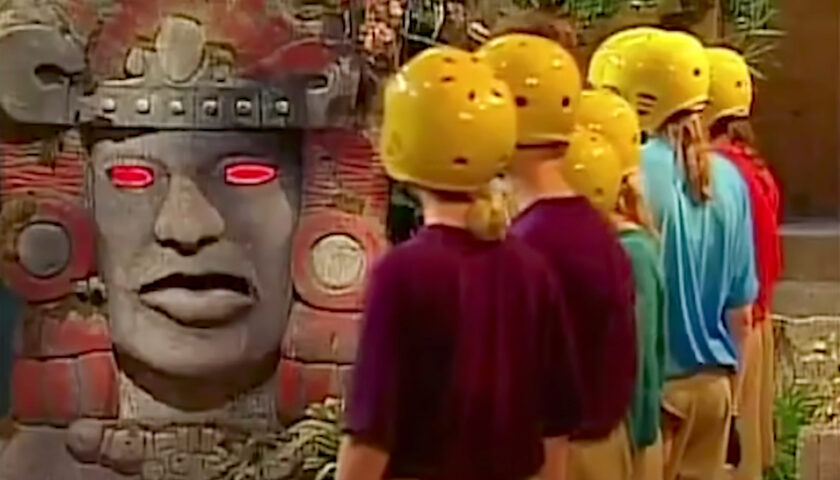 Legends Of The Hidden Temple is a reboot of the 1993-95 Nickelodeon game show, only this time around the contestants are adults instead of kids. Hosted by Cristela Alonzo, four teams of two — friends, coworkers, relatives — go through four challenges to try to reach the Hidden Temple. If they find the hidden treasure in that temple, and get it back to the start of that round, the winning team will win $25,000.

A gong bangs, and we see the scenes from the first episode as the contestants make their way through some plant life.

As with the previous version, a stone figure named Olmec (Dee Bradley Baker) talks about the history behind the week’s challenge and also determines whether the answers the contestants give are correct or not. At the end of each round, the team that comes in last is eliminated; eventually one team plays for the grand prize.

The first round — The Moat — is a physical challenge that is done in a shallow pond that the teams have to cross by meeting challenges like knocking a clay bird off a pedestal. The next round — The Steps of Knowledge — is a straightforward Q&A round where the teams advance down the steps with right answers. In the third round — The Temple Games — the remaining two teams perform two physical challenges in order to earn a “Pendant of Life.”

The first team with two pendants moves on to the final round, The Temple Run, where they face multiple rooms and challenges in order to find the hidden treasure. The team gets $2500 just for making it that far, $10,000 if they grab the treasure within the allotted time, and $25,000 if they return it to the starting point before time runs out.

Is it weird to see a kids’ game show adapted for adults? Maybe. But in the case of Legends Of The Hidden Temple, it feels like more of a tribute than anything else. The idea is that these contestants — two party animal friends from NJ, two “metal dads”, two glam buddies and two generic white dude roomies — used to watch the show at one time or another; reruns aired on one Nick channel or another until 2007.

What we enjoyed about the show is the fact that the producers didn’t try to zuzh up the series for the 2020s. The only real change is that the sets are outdoors in the sun instead of on a soundstage, which — lets’ be honest — makes for a much more visually appealing show. Oh, and there are four teams instead of six, which helps simplify the format. Otherwise, the t-shirts with the animal team symbols on it are the same, the props are just as fake looking… even the consolation prizes are in the same vein (a swag package, a scooter, the t-shirts themselves).

The contestants are game, of course, and Alonzo is an enthusiastic host. She was a fan of the show, too, and it’s evident in her banter with Olmec and how she interacts with the contestants. It’s all in an effort to replicate the vibe of a show many millennials grew up watching and translate it to a primetime series. And in that respect, it works very well.