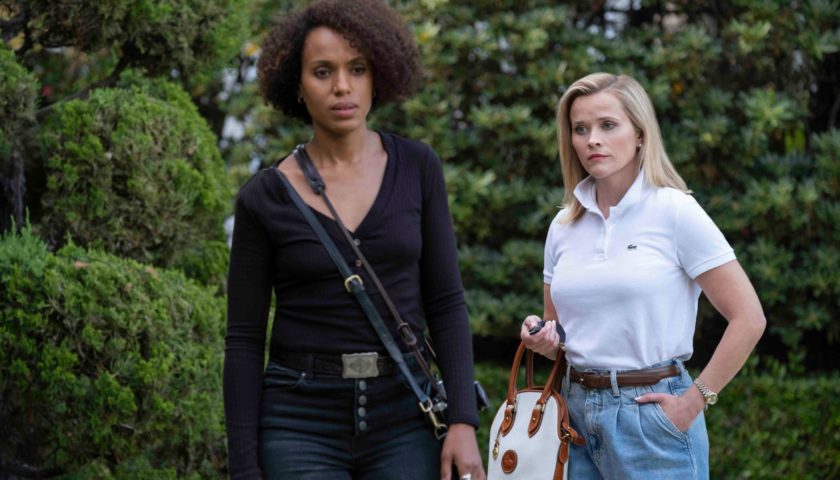 For all its beachside opulence and one-percenter mommy wars, Big Little Lies zoomed out when it counted. By the end of the first season (let’s just forget the second one ever happened), the Monterey 5, as the central quintet came to be coined, were united in their retribution against a rapist and domestic abuser. If all the wealth in coastal California couldn’t shield those Eileen Fisher-wrapped women from patriarchy’s ravages, what chance did women who have so much less stand?

Hulu’s splashy new miniseries, Little Fires Everywhere, will most certainly garner innumerable comparisons to the similarly titled Big Little Lies. The analogy isn’t unwarranted: Both star Reese Witherspoon as a self-appointed problem-solver, are set in wealthy enclaves governed by tribal peculiarities and tackle thorny issues of motherhood and female solidarity. Like the HBO drama, Little Fires Everywhere is based on a best-selling book (in the case of the latter, authored by Celeste Ng, who serves as a producer here). And both series begin with a central mystery: in this case, who set ablaze the suburban mansion of Witherspoon’s Elena Richardson, with her inside it.

Elena’s three older children suspect the youngest, Izzie (Megan Stott), who, unbeknownst to them, is widely bullied at school for an unexplained incident. (Other than faithfulness to the source material, the hostility Izzie endures might be the only reason the series takes place in the mid-’90s.) But the more likely (if too obvious) candidate for the arson is Elena’s tenant Mia Warren (Kerry Washington), a nomadic artist and single mom whose distaste for her landlord soon metastasizes into a rancorous if righteous crusade.

Little Fires Everywhere begins as a tale of two mothers — a pair of strong-willed matriarchs who struggle to let their daughters seek support from other women. After a lifetime of transience and austerity in service of her mother’s art, 10th-grader Pearl (Lexi Underwood) can’t help marveling at the stability and material comfort that Elena and her lawyer husband (a muted Joshua Jackson) provide for their children. (Elena, in turn, is thrilled that someone notices her effort.) Meanwhile, artsy misfit Izzie, who finds her mother’s normie dictates for a picture-perfect facade intolerable, finds refuge in Mia’s studio, since the maternal bohemian, to her well-adjusted daughter’s perpetual disappointment, is ready and eager to help out any wayward souls whose path crosses hers.

Jam-packed with flashbacks and side plots, the series also begins as an indictment of Elena’s tendency toward white savior-dom and the casual racism that suffuses the Richardson household. Elena is thrown off when Mia is less than effusively grateful for her discounted rent, then confused that the artist, who takes on housekeeping duties at the landlord’s home for extra cash, doesn’t treat her as a social superior. Accordingly, Mia is suspicious of her daughter’s friendships with the older Richardson kids (Jade Pettyjohn, Jordan Elsass and Gavin Lewis) — oblivious brats practically destined to let down Pearl. Still, Mia feels bad that she didn’t know how much her peripatetic lifestyle had left her only child feeling alone and neglected.

But the larger conflict between the two mothers — and the storyline that ultimately makes this middlebrow melodrama feel increasingly smaller and less resonant through its mostly absorbing eight-episode run (of which seven installments were made available to critics) — is the opposing sides they take on a Solomonic case involving a 1-year-old infant left at a fire station. Mia advocates for the biological mother, a co-worker (Huang Lu) whose undocumented status makes her particularly vulnerable, while Elena supports her infertile best friend (Rosemarie DeWitt), who is in the final stages of adoption after caring for the baby for months. Even still, Mia and Elena’s attachments to the case are almost illogically fierce, leaving the show to gradually justify the intensity of their reactions. As the two women transform from archetypes to specific characters with detailed biographies, their stories and motivations make more sense, but also feel increasingly anomalous and distant.

Witherspoon and Washington are well-matched sparring partners, never more so than in a late scene in the second episode, as the uneasy peace between their characters abruptly evaporates in front of their eyes. (Washington’s signature flickers of pain, quickly forced under the surface as the stoic Mia composes herself over and over again, are especially moving.)

Pilot director Lynn Shelton, who helms half the season, gives the series an unexceptional if appealingly sun-dappled look, but the few instances showing Mia’s artwork are genuinely striking. If Big Little Lies gave only a dutiful glance at Monterey’s economic ecosystem, Little Fires Everywhere takes care to uncover the many layers of racial and class privilege that make motherhood easier, if seldom easy. Its exploration of why women often feel more alienated from than connected to one another is far from lean-in aspirational, but at least it’s honest.