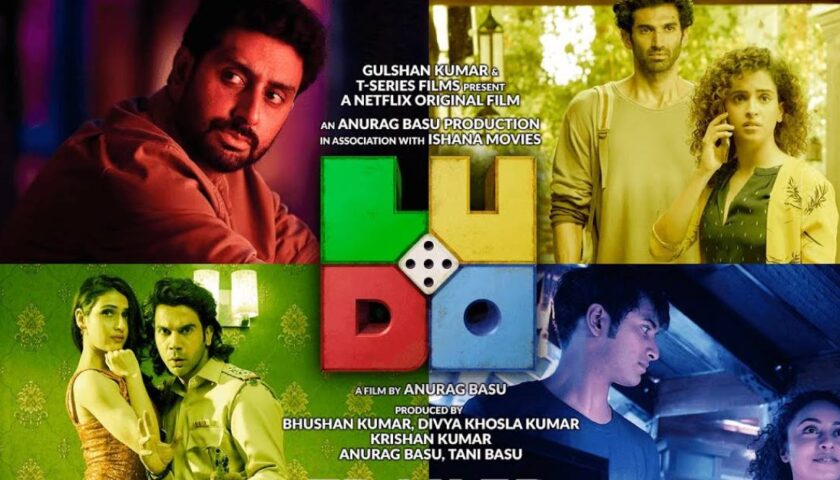 Three years following the release of ‘Jagga Jasoos’, the filmmaker returns to familiar terrain with a multi-narrative screwball comedy that is delightful in parts

Even before the twin words: hyperlink cinema were officially keyed in film critics’ lingo, Anurag Basu made Life In a Metro. You could say that since then, all his stories were mounted on a large canvas with multiple narrative threads, even something as pedestrian as Kites.

It is hard to not think of Thiagarajan Kumararaja’s swashbuckling Super Deluxe — another multi-narrative movie, where the plot points move incredibly well and whose proceedings are fuelled by philosophical musings on life and morality — while watching Basu’s Ludo, which, too, follows a similar narrative trajectory. Of the two, Super Deluxe is a better film and less indulgent. But unlike Kumararaja’s film, Ludo toys with the perception of karma and dharma.

The spine of any multi-narrative movie is the intersection of stories; the point of convergence where the world begins to close in on the characters. The first half-hour of Basu’s screenplay is remarkably structured that you almost revel in wonderment, given how little is established (the editor, Ajay Sharma, does a fabulous job) and how each scene acts as a predecessor with a central character — interlinked to one of the four stories of Ludo — that gets its own arc, when Basu shifts the focus (he has doubled up as cinematographer for this film), or should we say rolls the dice? Let us get this out of the way: Ludo, the game, might be the larger allegory on life — “Ludo is life and life is ludo,” says a character — but it has very little purpose to serve, barring the four colour-coded stories.

The film gets a Bergman-esque opening scene with two characters, with shades of black and white — one of which is played by Basu himself — contemplating the purposefulness of life and death, as they settle for a game of ludo. They are both the narrators and gods of destiny, in writing the fate of the principal characters. In other words, ludo is their game and the dice that unites these individual stories is Sattu Bhaiya (Pankaj Tripathi plays Pankaj Tripathi in a Pankaj Tripathi role), a very amiable gangster and the nucleus, to which every character revolves around. Sattu has to settle old scores with his once-right hand, Bittu (a defiant Abhishek Bachchan, who embodies a bit of Lallan from Yuva, albeit a little worn out).

The shades of red in Bittu’s is indicative of the blood in his hands and the past “sins”. He gets a redemptive arc when he finds a daughter in Mini (a charming Inayat Verma), who restores the moral balance in his life. Would Bittu rot in hell for his violent past or would he go to heaven for saving a family? In his case, is it karma or dharma? You don’t know, you never know. It is the same with Sattu’s case — hey, it is nice to see a Bollywood film devoid of unnecessary virtual signalling and a tone-deafpolitics after a long time.

There’s the yellow square in the form of Akash (Aditya Roy Kapur) and his once-girlfriend Shruti (Sanya Malhotra), the most banal of the lot. If Bittu is grappling with something internal, Akash and Shruti battle with external forces, when they come across a video of them having sex, on an adult website. Since ludo has another square, we have the addition of a blue-tinted story with Pearle Maaney and Rohit Suresh Saraf.

It is not that the story arcs of Ludo are exceptional, but the “extraordinary” circumstances in which the characters find themselves trapped and the way Basu evokes humour from their helplessness, are. And they are outrageously funny, often veering between a black comedy and a musical drama.

Take the Mithun Chakraborthy-inspired Alok Kumar’s (a wonderfully animated Rajkummar Rao. Someone please write a full-fledged masala film, already) story, for instance. He plays a quintessential Bollywood hero, an embodiment of what Dhanush has mastered over the years: a soup boy, in an unrequited love with his high school sweetheart Pinky (Fatima Sana Shaikh), who is now a wife and a mother. Their portion is bizarrely entertaining, reminding us of snatches from Rajkumar Santoshi’s Ajab Prem Ki Gazab Kahani. Anything more will spoil the fun.

Basu seems to have learnt his lesson, for, the structure of Ludo is written with careful precision and the construct is cleaner; in Basu’s language, “it only has a beginning, a middle, and an end”. But its “middle” part is where it begins to develop a crack and you wish it had been tighter, with at least 20 minutes to spare. Mind you, Ludo is not a “lengthy” film, but the manner in which it jumps from one story to another becomes repetitive; the way these stories converge becomes convenient, and the resolution it gets towards the end is a tad generic.

In all fairness, Ludo, like the song ‘O Beta Ji’ that comes early on, has a few good moments and a few bad stretches.