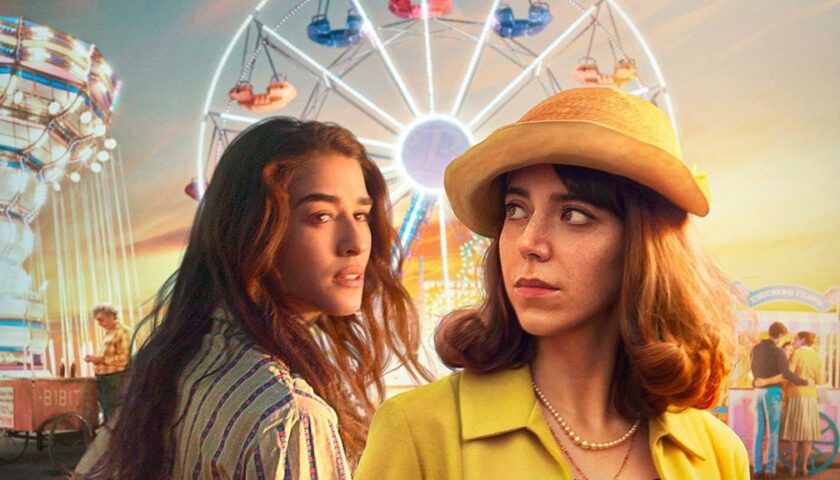 People lounging on a waterfront plaza in Rome. The year is 1962. A woman with a butterfly tattoo on her back lays in the sun.

The girl, Nora Marini (Simona Tabasco), sees a chance to practice one of her skills and distracts a tourist by saying there’s a rat. As he and his wife scramble around, she takes his wallet. She lives at the Luna Park carnival with her grandfather Antonio (Tommaso Ragno) and grandmother Miranda (Milvia Marigliano). Miranda tells her that she can read people’s fortunes that night, but to be serious about it and don’t mess with people’s lives.

That night, Rosa Gabrielli (Lia Grieco) goes to the carnival with her boyfriend Matteo Baldi (Edoardo Coen), his photojournalist brother Simone (Alessio Lapice) and her brother Giggi. She goes into Nora’s tent to get her fortune read, and one of the things she asks is if she’ll ever find her twin sister, who disappeared 20 years ago, when they were both 1. When Rosa tells her that her twin had a butterfly-shaped birthmark on her back, a shocked Nora stops the reading immediately. When she thinks she lost her wallet, Simone goes back in and is highly intrigued by Nora.

Back at the Gabrielli estate, Giggi celebrates getting an audition arranged by his dad Tullio (Paolo Calabresi), an influential real estate developer. In the meantime, at the carnival, Antonio’s brother Ettore (Mario Sgueglia) comes back to Rome after 20 years away. He brings a film of Nora’s late mother, making her wonder even more where she actually came from. She rifles through her grandmother’s trunk and finds newspaper clippings about the Gabrielli’s missing baby, and also wonders why she has that tattoo when no one else in her family has one.

Created by Isabella Aguilar, Luna Park is a frothy, somewhat soapy drama about two women in very different circumstances discovering new family, friends and loves. It’s not really trying to be much deeper than that, and that’s something we appreciate.

The inviting Roman scenery, both in the city and at the countryside estate of the Gabriellis make the show visually stunning, even in neon-lit carnival scenes. The soundtrack, an odd mix of swinging sixties music and more modern tunes like Phoenix’s “Lisztomania”, tries to ensure that the show has a modern feel despite its time period.

The first episode’s set up is a bit slow, where it seems we’re getting more character development about side characters like Simone and Giggi than we are about Nora and Rosa, but that’s the point. Aguilar is trying to set up a world revolving around the carnival and the Gabriellis, and in shows where characters reign supreme, spending time to develop the smaller characters right from the smart helps in that mission. It’s certainly a delicate balance, but we’ll always take development over plot in a character-driven show like this.

Where the show will succeed or fail is on Tabasco and Grieco. Both shine in their own way, and we hope that as the Nora and Rosa get to know each other, the brief sparks of chemistry they showed in their one scene together will continue. The men are a bit interchangeable, but Tabasco’s fire and Grieco’s innocence really set them apart.