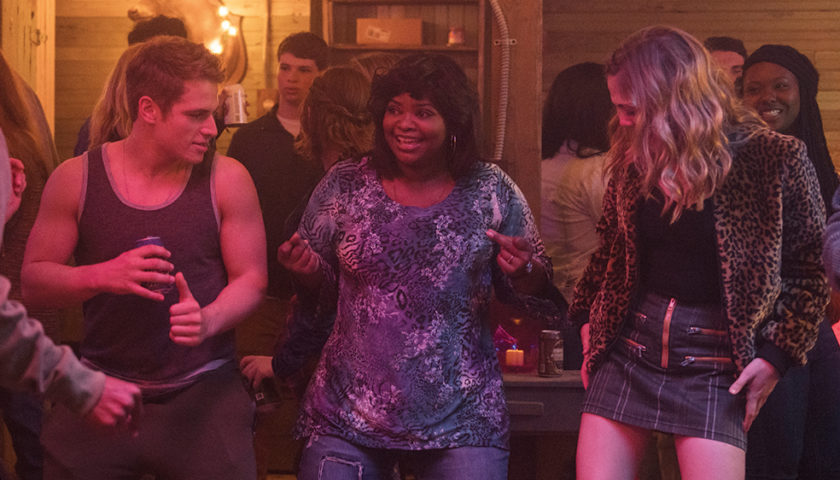 Review: As the title character of “Ma,” Octavia Spencer goes at the role of a friendly-on-the-outside, crazy-on-the-inside desperate stalker-pest in a way that befits a world-class actress who has chosen to star in a pumped-up B-movie. She does all she can to play the character as a real human being, and that accomplishes two things: It puts a bit of flesh on the clever/dumb bones of this Blumhouse production — a teen-flick variation on “Fatal Attraction,” with distant glimmers of “Carrie” as well as “Misery” and other revenge-of-the-nerd stalker thrillers. At the same time, Spencer’s humanity only makes the character seem that much creepier, which is a good thing.

You can’t take “Ma” seriously. It’s a squalid formula picture that’s too busy connecting dots, hitting beats, engineering situations designed to make you squirm. But you will squirm. And though even the youngest sector of the demo for this movie will know that they’re being manipulated, they’re likely to turn out for it. The novelty and, dare I say it, the restraint of Spencer’s performance — when she’s not pulling out all the stops, though she manages to do even that in a controlled way — should prove to be enough of a lure to turn “Ma” into a minor money-maker.

In an anonymous gray working-class scrub-brush town that looks like it could be in the middle of Ohio or Missouri or Massachusetts or Nevada, and actually benefits from never being named, Maggie (Diana Silvers), who has just moved there with her mother, Erica (Juliette Lewis), finds herself hanging out with a bunch of new high-school pals in a van outside a liquor store. They keep trying, and failing, to get an adult to buy them some booze. Then Sue Ann (Spencer) comes along, walking a three-legged dog. She balks, too, but remembers her own days hanging out at the rock piles, a local teen-party spot that has all the allure of a trash dump; so she buys the kids a few bottles. The next day, she buys them a few more. Then she invites them over to her house to party in the basement.

Sue Ann, who works as an assistant for a testy veterinarian (Allison Janney), appears to be a lonely person, but it’s not as if hosting teen drinking parties in the unfinished rec room of her large home in the middle of nowhere could be called responsible behavior. Something is off, and the flashbacks to Sue Ann’s ’80s adolescence, when she was a wallflower (Kyanna Simone Simpson) who kept being approached by Ben (Matthew Welch), the hottest guy in school, tell us that Something Really Bad Happened.

Spencer, a chameleon of an actress, does mood swings in “Ma” that leave us entertainingly off guard. First she’s the cheery, warmhearted divorced loser still trying, after all these years, to ingratiate herself with the hipster-insider kids. Then she’s the middle-aged wannabe party lady who still thinks that it’s cool to dance the robot to “Funkytown.” Then she’s the noodge who blasts video-selfie invitations to all the kids’ phones, and the lusty cougar with eyes for Andy (Corey Fogelmanis), the cutest boy in Maggie’s clique, who at one point refers to Sue Ann as “ma,” and the nickname sticks. (She becomes the kids’ maternal mascot.) Then she’s the hothead forcing Andy to strip at gunpoint, then the prankster who pretends that it’s all a big joke, saying, “You think I’m Madea?”

She is also, of course, the sinister manipulator who will lace liquor shots with animal tranquilizer. And the angry psycho with a thirst for vengeance (though Spencer does it with a weirdly inviting smile). And the mother who’s a walking head case of Munchausen syndrome by proxy.

“Ma” was directed by Tate Taylor, who made “The Help,” which featured a brilliant (and Oscar-winning) performance by Spencer. He then grew as a director in his unjustly overlooked follow-up film, “Get On Up,” a James Brown biopic, with an extraordinary performance by Chadwick Boseman, that was my choice for best film of 2014. I think I understand why Taylor has now gone slumming. Doing a Blumhouse thriller like “Ma” is a way to shore up his commercial bona fides — and, he probably figured, to loosen up and have fun. In the age of Jordan Peele, it’s not like he’s losing credibility.

But when you’re trying to make a good movie out of a script like this one, by Scotty Landes, that’s made of derivative bits and pieces, you can wind up spinning your wheels. In “Ma,” Taylor gets bits of texture going in the early teen scenes, and in the interaction between Maggie and her mother, played by Juliette Lewis as a forlorn tough bird who’s returning to her hometown after trying to make it in San Francisco (where her marriage failed, and her career ambitions too). She’s gotten a job as a cocktail waitress at the local casino, which leaves her zero time to supervise her daughter, who is on her own, logistically and spiritually.

Diane Silvers has a coltish sincerity, and she and the other actors do what they can to fill out their roles. They’re playing glorified versions of the fresh meat in a slasher film, but Taylor shows a gift for snuff terror. Sue Ann has a hidden agenda in choosing these kids, and when she finally sets about meting out punishment, the movie makes you cringe in all the right places. And there’s one added sly element. The topic of race is barely mentioned, but when Sue Ann talks about growing up as an “outsider,” Octavia Spencer invests that with a subtext of what it meant to be the isolated black girl trying to fit into a homogenized youth culture of Middle American louts. It’s no justification for the horror she inflicts. But it does lend a bit of frisson to the explanation.